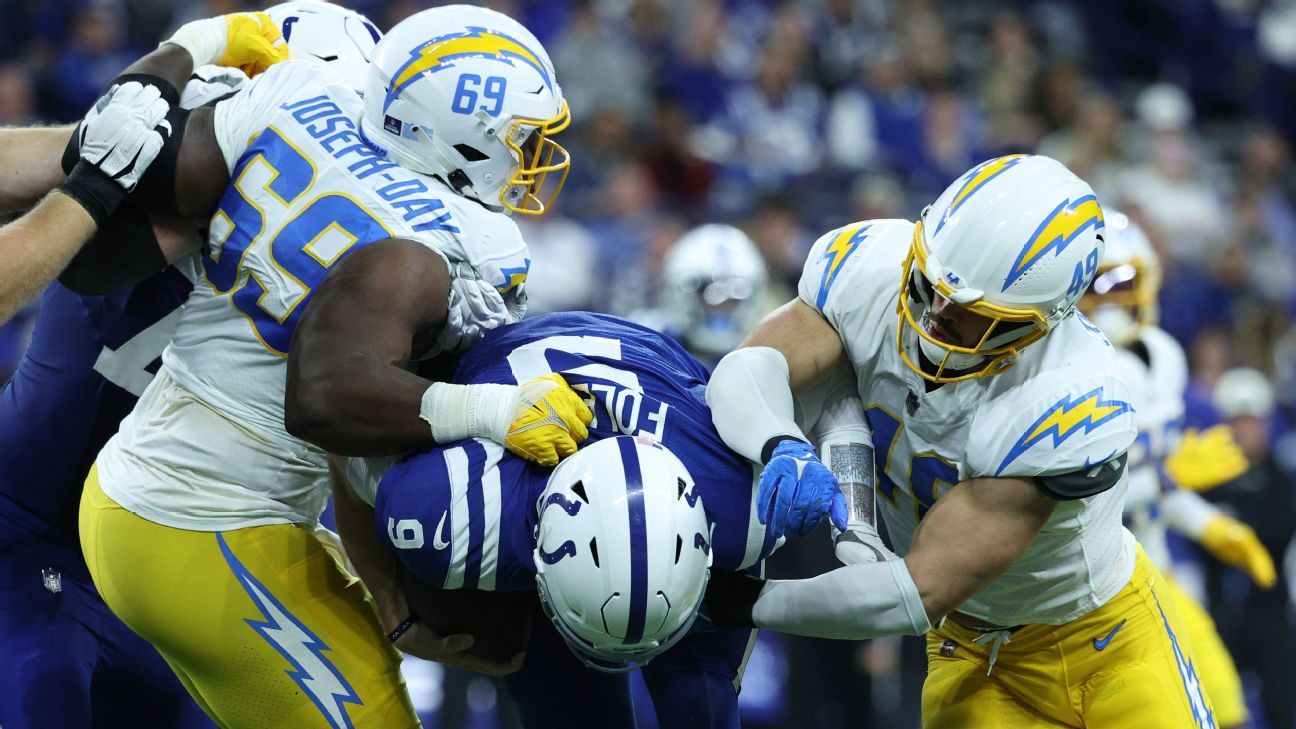 11:18 PM ETStephen HolderLindsey ThiryCloseESPN Covered Rams for two years for Los Angeles Times
Previously covered the Falcons
Has covered the NBA and college football and basketballINDIANAPOLIS — Two teams headed in different directions continued on their paths Monday night as the Los Angeles Chargers (9-6) won their third straight to clinch a playoff berth with a 20-3 victory over the Indianapolis Colts (4-10-1), who lost their fifth straight.Neither offense was particularly sharp as L.A. quarterback Justin Herbert didn’t throw a touchdown pass, threw an interception and lost a fumble. Meanwhile, the Colts turned to veteran Nick Foles as their third starting QB this season, replacing Matt Ryan who wasn’t active Monday. Foles threw three interceptions without a TD.The Chargers’ defense was relentless, sacking Foles seven times.Despite Indy’s offense turning in another lethargic game, the Colts’ defense continued to play at a high level, sacking Herbert four times.The Chargers’ seven sacks were their most since 2016. Michael Hickey/Getty ImagesLos Angeles ChargersA dominant defensive performance, coupled with timely plays on offense, provided the perfect formula for the Chargers.For the first time since 2018, the Bolts will return to the postseason, earning their first playoff berth under second-year head coach Brandon Staley.Entering Week 16, the Chargers had a direct path to the playoffs if they won their remaining matchups. However, their postseason ticket came quicker than perhaps expected after the New York Jets, New England Patriots and Las Vegas Raiders each lost.QB breakdown: Herbert overcame an uneven start — which included throwing a first-quarter interception — to find a way to get the Bolts moving in the first half. Herbert went three-of-six for 20 yards and the pick on the first three drives, then went 12-of-13 for 125 yards on the final two drives of the first half. After losing a sack fumble in the third quarter, Herbert put together a 12 play, 88-yard drive that resulted in one-yard touchdown run by Austin Ekeler that sealed a victory midway through the fourth quarter. Herbert finished 24 of 31 for 235 yards.2 RelatedPromising trend: The defense struggled throughout most of the season, appearing to feel the effects of losing edge rusher Joey Bosa, cornerback J.C. Jackson and several linemen to injured reserve. But, the Staley-led unit is now peaking at the perfect time. For a fourth consecutive game, the Bolts did not allow any points in the first quarter, the longest such streak by the team since 2011. Foles was 0-for-4 with an interception and a sack on third down. Three players — cornerbacks Michael Davis and Asante Samuel Jr. and safety Derwin James Jr. — all intercepted passes.Sustained excellence: Chargers wide receiver Keenan Allen had 10 receptions in a game for the 16th time in his career, the fifth-most since he entered the NFL in 2013. In six games since returning from a hamstring injury that sidelined and slowed Allen for nine games, he has once again become a go-to target for Herbert. Allen caught 11 passes for 104 yards. — Lindsey ThiryUnder the radar stat that matters: The Chargers’ seven sacks were their most in a game since recording nine in 2016 against the Cleveland Browns.Next game: vs. Rams (4:25 p.m., ET, Sunday, Jan. 1)Nick Foles, who replaced Matt Ryan as the starter last Wednesday, didn’t have much time to establish chemistry with his receivers, and it showed with three interceptions. AJ Mast/AP PhotoIndianapolis ColtsThe Colts’ third quarterback change of this wayward season failed to produce any meaningful offensive results, with Indianapolis continuing to struggle to move the football and put points on the board.The Colts were again stagnant on offense, producing 173 total yards and being held to 10 points or less for the fourth time this season. Remarkably, the Colts finished 0-for-10 on third downs in the game. It was just Foles’ second start since November 2020, and it will be remembered for misfires and an inability to escape defensive pressure. Foles threw three interceptions, completed just 17 of 29 pass attempts for 143 yards and was sacked seven times.Biggest hole in the gameplan: The Colts came out firing the ball with an aggressive passing attack, despite playing a quarterback who had the benefit of only minimal practice time with the starting offense since training camp. Foles said after he was promoted last week that he had not thrown to the starting wide receivers and tight ends since the preseason, having spent most of the past several months working on the scout team. That showed up almost immediately, with Foles and his receivers struggling to connect, with a number of miscommunications.The Colts are missing injured running back Jonathan Taylor, but the Chargers are also one of the worst rushing defenses in the NFL. The Colts didn’t attempt to lean into the running game until the third quarter.Troubling trend: The Colts again showed promise on defense, harassing Herbert and limiting Los Angeles in the running game. But something that has continued to occur in recent weeks is the unit running out of gas in part because of the ineffectiveness of the Indianapolis offense. The Colts’ failure to sustain drives and score consistently has put undue pressure on the defense, and the unit hasn’t been able to maintain its performance for four quarters. It happened two games ago in Dallas, when the Colts committed turnovers on four straight possessions. And it happened last week at Minnesota, when Indianapolis crossed the 50-yard line just twice in the second half. That resulted in a historic comeback win as the Vikings overcame a 33-0 halftime deficit.Describe the game in two words: More disappointment. The Colts have lost seven of eight and five of six since replacing former head coach Frank Reich with Jeff Saturday. Specifically, Indianapolis has given up 113 points in its past three games. — Stephen HolderUnder-the-radar stat that matters: Foles was 4-of-10 for 57 yards with three interceptions on throws of 10+ air yards.Next game: at Giants (1 p.m., ET, Sunday, Jan. 1)