What’s next for the Broncos after firing Nathaniel Hackett? 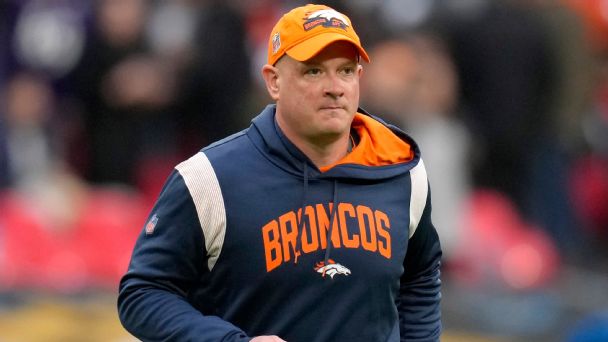 4:14 PM ETJeff LegwoldCloseESPN Senior Writer Covered Broncos for nine years for Denver Post and Rocky Mountain News
Previously covered Steelers, Bills and Titans
Member of Pro Football Hall of Fame Boardof Selectors since 1999Mike TannenbaumENGLEWOOD, Colo. — A disastrous 51-14 road loss to the Los Angeles Rams in front of national audience loss proved to be the final straw, as the Denver Broncos fired first-year head coach Nathaniel Hackett on Monday after falling to 4-11 in a 2022 season rife with disappointment.The Broncos, who acquired quarterback Russell Wilson in the offseason in hopes of ending their playoff drought, are averaging a league-worst 15.5 points per game, the team’s fewest since 1971, according to ESPN Stats and Information. They have missed the postseason seven consecutive seasons since winning Super Bowl 50.Broncos reporter Jeff Legwold and NFL front office insider Mike Tannenbaum answer the biggest questions on Hackett’s firing and what comes next for one the league’s most storied franchises.What went wrong and why make the call now with two games left?1 RelatedThe Broncos have spent most of the season as the league’s lowest-scoring offense and quarterback Russell Wilson’s game looks fractured. Denver essentially put on a how-to-get-the-coach-fired clinic on Christmas Day with three Wilson interceptions, a defensive meltdown that allowed the Rams to score on eight of nine possessions and sideline blowups. Outside linebacker Randy Gregory capped it off with pointless penalties and a postgame punch on a Rams player. It’s one thing to try to look composed or keep it in-house, but Hackett appeared not to deal with any of it. His vision was a team “where guys were excited to come to work,” as he said when he was hired, didn’t materialize as the losses piled up. From his decision to have Brandon McManus try a 64-yard field goal in the season opener, almost every decision Hackett seemed to make didn’t work out the way he hoped or planned. — LegwoldKirsty Wigglesworth/AP PhotoWhat does this mean for Russell Wilson? Is he still the answer at quarterback?He has to be. No team can say “never mind” on a five-year, $225 million extension. The Broncos and Wilson have to be together through 2025 unless the Broncos want to make salary cap history and play with a roster filled with rookies and street free agents. It is incumbent on Wilson to get to work on the problems behind center, given his play and the offense’s continued stagnation may be the biggest reasons Hackett was fired. He has to repair his footwork and figure out why he continued to pass up easy completions in favor of low-percentage throws down the field that were covered. — LegwoldWho could the Broncos target as their next coach?The list could be long. Philadelphia Eagles coordinator Shane Steichen could be in the mix after helping implement one of the league’s best offenses. San Francisco 49ers defensive coordinator Demeco Ryans, Dallas Cowboys defensive coordinator Dan Quinn and Cincinnati Bengals defensive coordinator Lou Anarumo could also emerge as candidates. Former New Orleans Saints head coach Sean Payton’s name will be mentioned in any coaching search. He’s already leaning toward former Broncos head coach Vic Fangio as his defensive coordinator if he returns to the sideline next season. — TannenbaumCan Denver turn things around quickly enough to try and contend in 2023?Yes, but it starts and ends with the quarterback. They have to find a way for Wilson to play better, improve the offensive line and bring as many of his old schemes from the Seattle Seahawks as possible. Wilson was too successful for too long for the Broncos not to figure out a way for him to be productive. This is by far Wilson’s worst season for total QBR at 34.9, per ESPN Stats and Information. His prior career low was 57.1 in 2016 — the only other time he’s been below 60. –TannenbaumHow will the Hackett season be remembered?For how quickly it all dissolved. His in-game decisions quickly became fodder for national debate. Poor clock management emerged early in the season. His team fielded the lowest-scoring offense in the league behind Wilson’s sub-par play and a growing pile of losses. And some of the Broncos’ lowest moments also came during multiple national television appearances, including Sunday’s collapse against the Rams. — Legwold