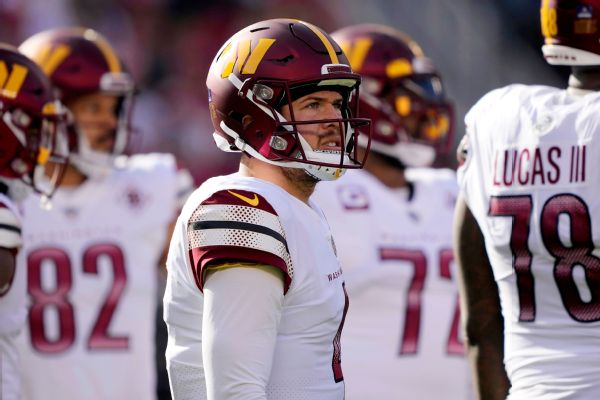 Washington Commanders coach Ron Rivera benched Taylor Heinicke for Carson Wentz in the fourth quarter of Saturday’s loss at the San Francisco 49ers, but Rivera said he isn’t yet sure if that’s a permanent move. Rivera said he’ll name a starting quarterback early in the week.Wentz played the final two series in a 37-20 defeat that dropped the Commanders to 7-7-1. They remain in the seventh and final playoff spot.Rivera said he would evaluate the situation, talk it over with his offensive coaches and make a decision. Washington will host the Cleveland Browns (6-9) next Sunday.Commanders offensive coordinator Scott Turner said he would not make a “knee-jerk decision” but used the fourth quarter as a chance to evaluate Wentz’s game. Rivera also said he didn’t want to see the 49ers “tee off” on Heinicke.”It was an opportunity for us to see where Carson was, and he did a nice job,” Rivera told reporters after the game. “We’re in a pretty good situation now.”Wentz last played on Oct. 13, when he broke his right ring finger in a 12-7 win over the Chicago Bears. He returned to the active game-day roster last week.Wentz completed 12 of 16 passes for 123 yards and a touchdown in two series of work against San Francisco (11-4).”We’re all competitors. I won’t sugarcoat it: We all want to be out there,” Wentz said. “If we lose that in this position, we’ll be out of it real quick. So it would mean a lot [to start], but that’s out of our control. We’ll both prepare and work our tails off and nothing will change because of the circumstances. Whatever happens, happens.”Heinicke said he is accustomed to being in this situation — always an underdog or on the verge of losing his job, especially in the NFL.”I’ve heard things like that my whole life,” Heinicke said. “I try not to pay attention to it. I control what I control, and that’s going out and playing as hard as I can — and that’s what I feel I did. If they need to put Carson in there, OK. I’ll come to the facility every day, work hard and be the best I can.”Heinicke played one of his more efficient halves of the season in the first two quarters, completing 8 of 11 passes for 89 yards and a touchdown. Another drive ended at the 1-yard line when Washington failed to convert a fourth-and-goal. He threw a second touchdown pass in the third quarter.But in the fourth quarter, Heinicke lost one fumble at his own 11-yard line, leading to a 49ers field goal. On the next possession, he was intercepted — this time at the Commanders’ 25-yard line, resulting in a second field goal and 27-14 deficit.”I was pretty banged up, and the last two drives were turnovers, so I get it,” Heinicke said. “Carson did a good job.”Rivera said Heinicke played “pretty good” in the first half and also said that to “pin all the turnovers on him would be tough. Those weren’t his issues. There were some things we could have done better.”Still, that was enough for Rivera to make the change to Wentz. Washington’s offense had moved the ball during Heinicke’s starts; the Commanders were 13th in the league in total yards during his first seven starts. However, they were 25th in the red zone and scoring and 27th on third downs.Rivera was pleased with how Wentz played.”He had good command of what we were doing,” Rivera said. “He stood tall in the pocket and got the ball out quickly a couple times and threw some good balls.”Washington traded two third-round draft picks to the Indianapolis Colts and swapped second-round picks in March to acquire Wentz. He has a salary-cap hit of $26.7 million in 2023 but has no guaranteed money left, so Washington could cut him without any financial penalty. But the Commanders do want to find out if he can be their guy in the future or not.If Wentz starts, he would be playing in an offense that is more run-heavy than when he played in Washington’s first six games. The coaches hope that would lead to more success for Wentz.”Our ability to run the ball takes a lot of pressure off the quarterback,” Rivera said. “This is a different unit from the group he played with. There are some things that shows what he can do when he does have the opportunity to stand tall in the pocket.”