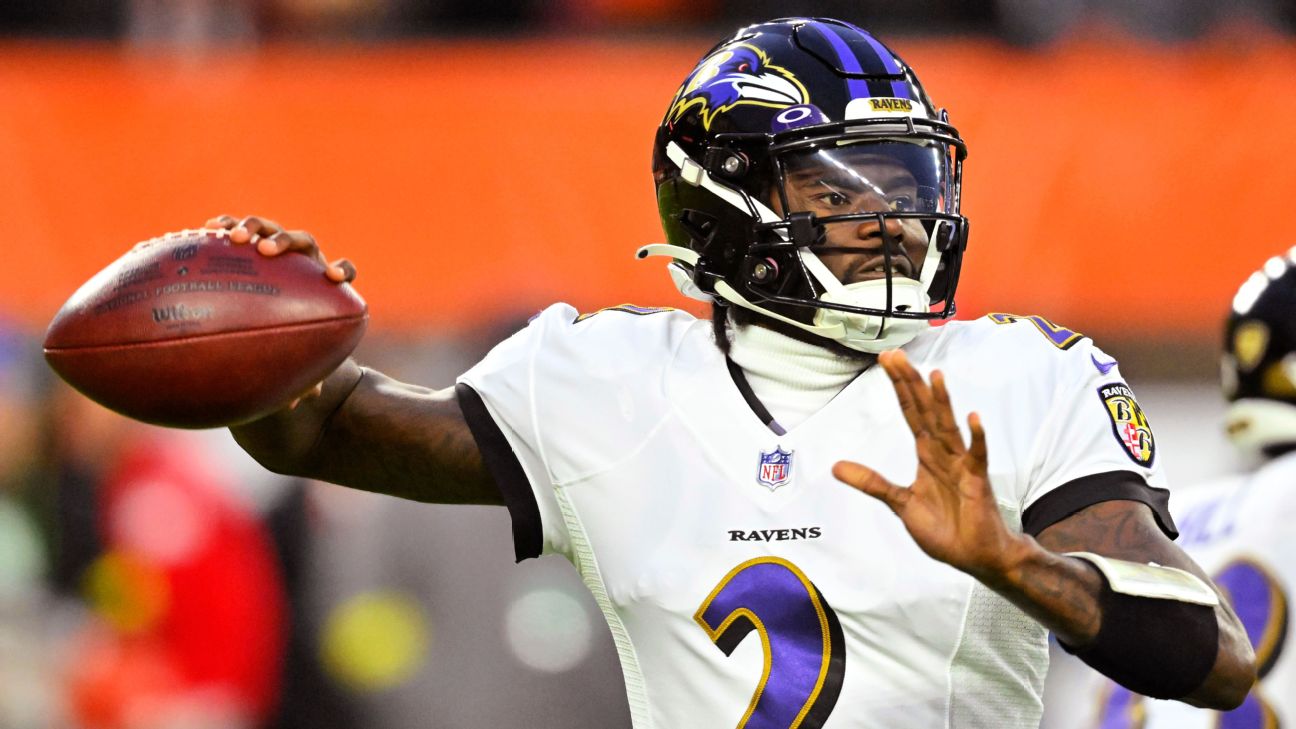 Baltimore Ravens quarterback Tyler Huntley was voted as the AFC’s fourth alternate Pro Bowl quarterback, one slot after the third alternate Pro Bowl quarterback Lamar Jackson, the quarterback he is replacing again Saturday, league sources told ESPN.Huntley, who will start his third game of the season Saturday against the Atlanta Falcons, got more votes than other quarterbacks like Ryan Tannehill, Derek Carr and Mac Jones, who went to the Pro Bowl last season during his rookie year.If any of the top three quarterbacks voted to Pro Bowl weekend — Kansas City’s Patrick Mahomes, Buffalo’s Josh Allen and Cincinnati’s Joe Burrow — decide not to attend, there’s an outside chance that the Ravens could have two quarterbacks attending and participating in Pro Bowl weekend, which is believed to be a league first.2 RelatedHuntley is scheduled to be a free agent this offseason and he will continue his attempt Saturday to prove his value to Baltimore and other teams. Should some of the top quarterbacks back out and Huntley wind up going to the Pro Bowl, his offseason value could be further boosted.Huntley, 24, has completed 70.3% of his passes this season for 413 yards, no touchdowns and two interceptions this season while also rushing for 87 yards and a touchdown on 25 carries.There had been optimism heading into this week that Jackson would return, but he missed all three practices. He hasn’t suited up since injuring his knee in the first quarter of a 10-9 win over the Denver Broncos on Dec. 4.The Ravens have lost five of the six games that Jackson hasn’t started the past two years.Without Jackson this season, Baltimore has been held to 16 points or fewer in three straight games for the first time since 2000. The Ravens have only scored two touchdowns in three games, including none in their last seven quarters.The Ravens (9-5) can secure their fourth playoff berth in five seasons by the end of this weekend. Baltimore can clinch with a win over Atlanta and at least two losses by these three AFC East teams (the Dolphins, Patriots and Jets). The Ravens can also reach the postseason if the Jets, Patriots, Browns, Colts, Raiders and Titans all lose.ESPN’s Jamison Hensley contributed to this report.