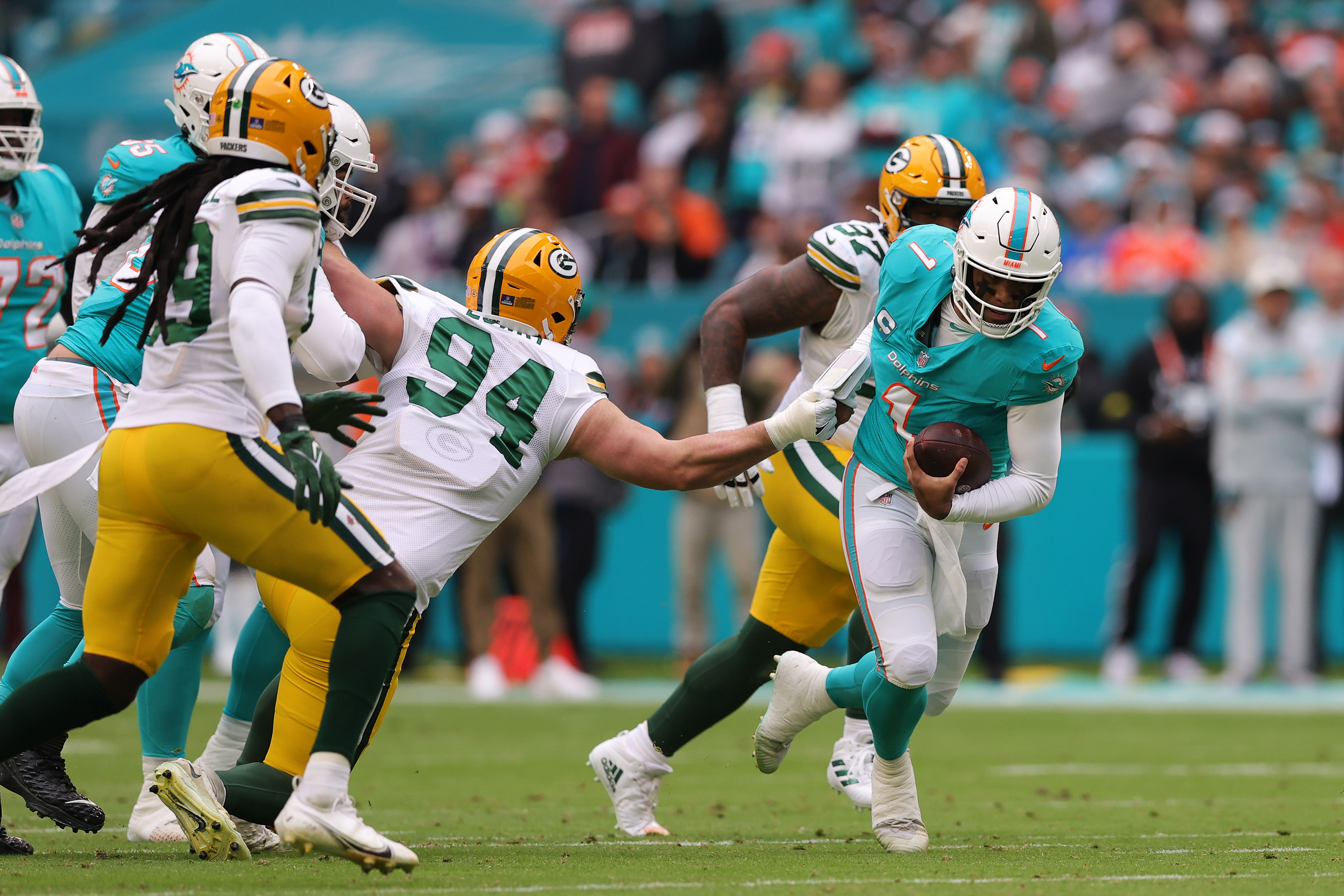 The Miami Dolphins might be without their starting quarterback as their season hangs in the balance entering the final two weeks of the regular season.Tua Tagovailoa was placed in the NFL’s concussion protocol on Monday, leaving his status for Sunday’s Week 17 matchup against the New England Patriots in doubt. After getting the Dolphins out to a 20-10 lead on Sunday, Tagovailoa struggled in the second half of their 26-20 loss to the Green Bay Packers. He threw an interception on Miami’s final three drives, including one with 1:34 left in the game as the Dolphins tried to win the game on their final possession. Tagovailoa completed 16-of-25 passes for 310 yards with a touchdown and three interceptions in the loss. Aaron Rodgers outperforms Tua Tagovailoa as Packers hold off Dolphins, 26-20
Aaron Rodgers threw for a touchdown and 238 yards to help the Green Bay Packers pick up a 26-20 victory against the Miami Dolphins.
This is the second time Tagovailoa has been placed in the league’s concussion protocol this season. He suffered a concussion in the Dolphins’ Week 4 loss to the Cincinnati Bengals in which he demonstrated a fencing response before being stretchered off the field and taken to a local hospital. A week prior, Tagovailoa appeared to suffer a head injury when his head hit the ground on a tackle during their Week 3 win against the Buffalo Bills, but that was determined to be a back injury at the time. The neurotrauma consultant who took part in Tagovailoa’s concussion check during that game was fired two days after the Week 4 incident, which caused the NFL and NFLPA to revise their concussion policy. Jay Glazer talks NFL and NFLPA changes to the concussion protocol following Tua Tagovailoa’s injuries
Jay Glazer discussed the NFL and NFLPA’s decision to investigate Tua Tagovailoa’s concussion protocol evaluation in October.
The concussion cost Tagovailoa two games. Despite struggling in recent weeks, Tagovailoa has statistically been one of the best quarterbacks in the NFL this season. He’s seventh in passing touchdowns (25), 10th in passing yards (3,548) and first in passer rating (105.5). If Tagovailoa can’t play on Sunday, Teddy Bridgewater would likely start as Dolphins coach Mike McDaniel announced he’ll receive most of the starting reps during practice this week. Bridgewater’s completed 37-of-60 passes for 522 yards with three touchdowns and three interceptions for an 86.5 passer rating over four games and two starts this season.Miami fell to the seventh and final playoff spot in the AFC following its loss on Christmas Day. The winner of Sunday’s Miami-New England game will control its own playoff destiny entering Week 18, the final week of the regular season. Top stories from FOX Sports: Get more from National Football League Follow your favorites to get information about games, news and more