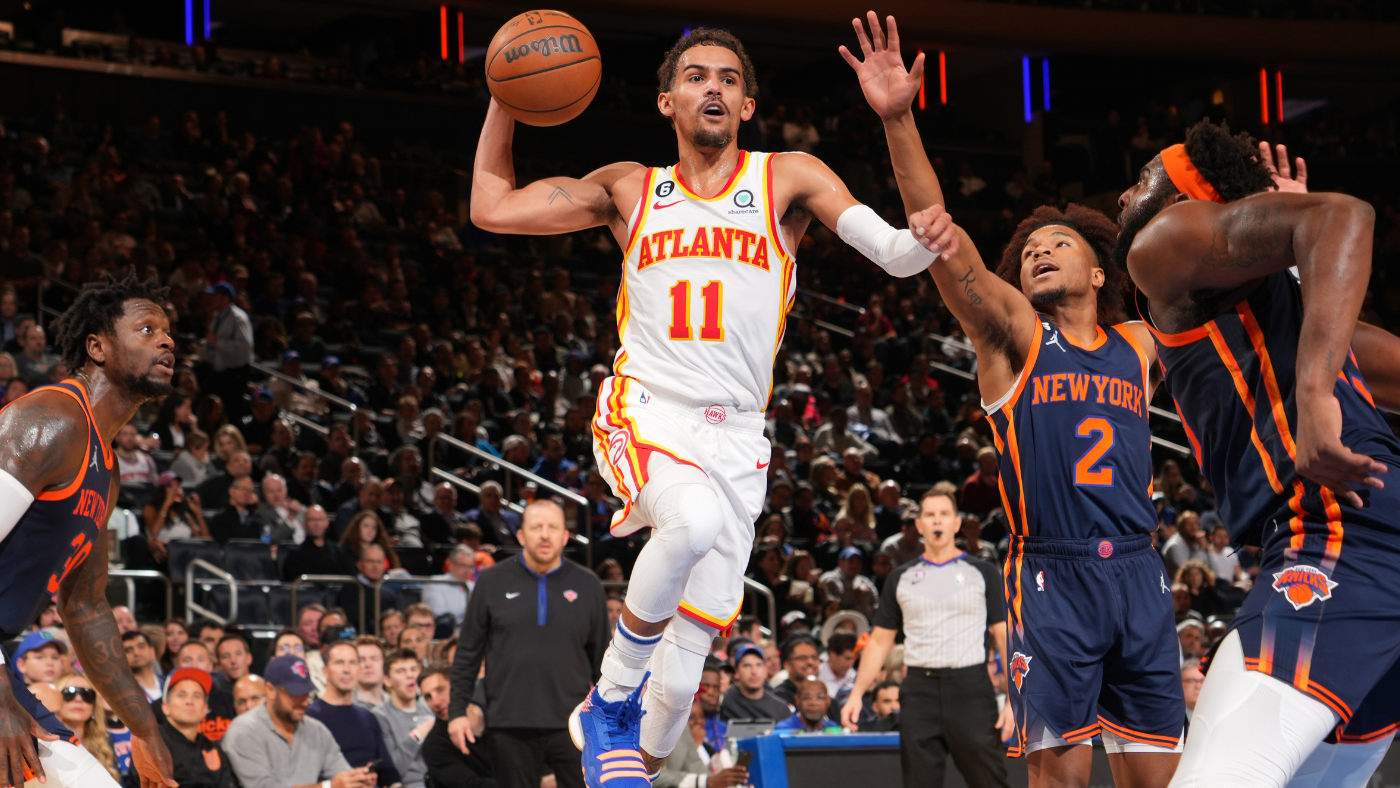 We need to make two things about Trae Young clear from the start:

Are we clear on those things? Good. So why are we here? Well, Bleacher Report’s Chris Haynes reported Thursday that rival executives believe Young could be the next superstar to demand a trade. This might just be speculation on their part. It might be an aggressive attempt to destabilize the Hawks in an effort to eventually land Young themselves. But we know how these things tend to work. Rumors of locker room tension mount. Trade speculation gets louder. Everybody involved insists that nothing is wrong. More often than not, the player is eventually traded.

We’re still very early in the cycle here. This is extremely fixable for Atlanta. But the reality we have to address is that the executive who drafted Young just got replaced, his coach benched him for skipping a shootaround in favor of treating an injury and young, star players are rarely happy on .500 teams. The ingredients for a trade exist here. So let’s skip several steps here. Imagine we reach a point, either at February’s deadline, the offseason or beyond, in which a Young trade becomes realistic or even inevitable. Who are the teams that make sense? What sort of packages could they offer?

Young is a tricky player to construct trades for. He’s one of the NBA’s most ball-dominant players, so pairing him with another high-usage guard is tricky. He’s one of the NBA’s worst defenders, so a team would need to have the right infrastructure in place to support him. He’s also really young and really famous. There are markets players like that simply don’t like playing in, and considering the cost he would certainly demand on the trade market, any team that acquires him would have to be reasonably confident that it could keep him. So with all of those things in mind, here are the five teams that make the most sense.

The offensive questions aren’t quite as pronounced as you might think. Either R.J. Barrett or Julius Randle would presumably be in the trade as matching salary, and Jalen Brunson isn’t a particularly high-usage player, at least relative to most primary ball-handlers. At 26 percent usage, Brunson isn’t that far ahead of where someone like Bogdan Bogdanovic has fallen on Young’s teams, and of course, we know Brunson can scale down comfortably because he did it alongside Luka Doncic for several years. He’s not making his catch-and-shoot 3’s this season, but he was never below 40 percent in Dallas. There’s just not much reason to believe Young and Brunson couldn’t make it work offensively.

Defense is where the concerns come up. Young is 6-foot-1. Brunson is 6-foot-2. Neither can guard forwards. Young can’t really guard anyone. Quentin Grimes has grown into a stellar defender for the Knicks, but he’s only 6-foot-5, and such a small trio carries significant downside defensively even if they could find ways to make the matchups work.

There’s also the matter of price. The Knicks are loaded with draft capital. They drew a line in the sand when it came to Donovan Mitchell. Considering Young’s age and contract, he might even cost more. Would the Knicks engage in such a bidding war? Their goal is to trade for two stars, not one. Perhaps Brunson’s strong season and the emergence of some of their younger players softens that stance somewhat. The Knicks have the assets to get Young if he becomes available. It’s just a matter of how desperately they decide to pursue him and how much they’re willing to sacrifice defensively to get an offensive centerpiece.

This is what Miami does. The Heat tried to swipe Mitchell and failed. Young could be their primary ball-handler of the future. The theoretical fit with Bam Adebayo is nearly perfect. Young has played almost exclusively with lob threats at center. Adebayo’s basketball IQ, screening and passing makes him arguably the third-best dribble-handoff partner for a star guard in basketball behind only Nikola Jokic and Draymond Green. That sort of dance partner could expand Young’s horizons in the pick-and-roll. Adebayo is the sort of defender you’d need to cover for Young’s shortcomings. Heat culture would squeeze out every last meager drop of defensive potential he has.

But Young is undeniably an awkward fit in Miami given what we know about how the Heat operate. Pat Riley went after Tyler Herro’s defense. Herro is a better defender than Young is. Erik Spoelstra runs the most egalitarian offense east of Golden State. How does Young, who has thrived in heliocentric offenses built entirely around his ball-handling, adjust to… well… being a part of a team? Herro is thriving in pick-and-roll this season, ranking in the 93rd percentile leaguewide in terms of efficiency once his passes are factored in. Would Miami view Young as a big enough upgrade? Well, they rank 26th in offense this season. Treating Young as an upgrade is perhaps the wrong way to look at such an acquisition. He’s a paradigm shift. Adding him fundamentally changes the way you are able to play offense. Herro can’t lift an entire offense into the top five in the ways that Young has.

Miami owes one future first-round pick to the Thunder. Monkey with the protections a bit and they can trade three first-rounders and three swaps. Herro is probably in the trade. The sneaky alternative would be to sniff around Jimmy Butler deals. Young is 24. Adebayo is 25. Butler is 33 and constantly injured. Would it be worthwhile to deal Butler to a contender now, while his value is still relatively high and before his contract becomes too cumbersome, and then flip whatever they get in a Young package? In the grand scheme of things, probably. Young and Adebayo is the foundation of a half-decade or more of contention. Miami’s front office is shrewd enough to fill in the blanks from there. At 16-16, this Heat season probably isn’t going anywhere. Act quickly enough and they can jump back into the title picture soon enough.

Speaking of teams whose identity Young defies, there’s something immensely satisfying about placing him on the “everyone is 6-foot-8” Raptors. It would be an emphatic end to Toronto’s experiment in positionless basketball, especially once Young’s need for a lob-catching center compels Masai Ujiri to finally find a reliable big man. Trading for Young would turn the Raptors into a normal basketball team. And you know what? The Raptors would probably be a pretty darn good normal basketball team.

The advantage of having an endless supply of wings is that if you need to trade some of them, there are replacements at the ready. Young has never had a teammate like OG Anunoby, who is probably Toronto’s third-most valuable forward. Fred VanVleet may be a small guard, but he can credibly defend players half a foot taller than him and is an elite 3-point shooter. The Raptors could re-sign him as Young’s backcourt partner if he isn’t involved in the trade. He’s good enough to win on the Pascal Siakam timeline. He’s young enough to win on the Scottie Barnes timeline.

That’s the ultimate question here. Of course the Raptors have their entire complement of draft picks to offer, but ultimately it’s hard to envision a trade of this magnitude getting done without either Siakam or Barnes in the deal. Barnes was seemingly off of the table for Kevin freaking Durant. Young is younger and more durable. Would Barnes’ slow sophomore start change their tune? Siakam has, frankly, been better than Young this season. Would the Raptors want to diversify their roster enough to consider that sort of swap? Could they build a deal around Anunoby and/or VanVleet? That might kill two birds with one stone. VanVleet is an impending free agent and rumors have suggested that Anunoby wants more touches, which Young would likely preclude. The Raptors have the assets to make this sort of trade, and given their disappointing season, might have the motive as well. But there’s not an obvious structure for such a deal, and consummating one would mean waiving the white flag on their current style of basketball.

The Magic are a futuristic version of the Raptors. They aren’t quite as defensively inclined, but instead of Toronto’s “everyone is 6-foot-8” mantra, Orlando takes it to the logical “everyone is seven feet” extreme. Okay, they’re not quite that big, but when your starting shooting guard is Bol Bol, you’ve demonstrated that size is a priority for you. Orlando would likely make an exception for Young, though, as the majority of their shot-creation now comes from forwards Franz Wagner and Paolo Banchero. Young would ease their playmaking responsibilities significantly.

Of course, that’s a double-edged sword. Banchero is so good and so young that the Magic probably want to ensure that he can really explore the studio space. Is he wasted on a team that’s devoting half of its possessions to Young pick-and-rolls? Wagner thrives in a more creative environment where he’s encourages to cut and screen and pass and attack mismatches. He and Banchero would definitely find ways to make it work on a traditional offense, but the Magic aren’t nearly far enough along in their rebuild cycle to make such a commitment to being normal. Being weird is probably their path to maximizing the existing talent.

But it’s worth noting that Orlando was expected to draft Young before Atlanta and Dallas made their fateful trade, and some Twitter sleuthing at the time suggested that Young would’ve been happy to land in central Florida. Opportunities to land stars of his magnitude are rare, and the Magic might be able to do it without sacrificing Banchero or Wagner by virtue of their potentially very high pick in the loaded 2023 NBA Draft. If Young becomes available, the Magic are going to explore the possibility of landing him.

If there’s one team that knows how to accommodate a high-usage point guard, it’s the Rockets. Young could pick up right where James Harden left off for the Rockets, though he’d have to be patient. The only player above 22 to play 400 or more minutes for Houston this season is Eric Gordon. These Rockets are very much still rebuilding. There is not winning infrastructure in place. Young would have to trust it to eventually develop.

Considering Houston’s deep reserves of draft capital, it likely would. More promisingly, the Rockets have barely any long-term money on the books. The final year of Gordon’s contract isn’t guaranteed. Houston built non-guarantees into Kevin Porter Jr.’s contract. If the Rockets wanted to use max cap space to find Young a running mate, it would have several opportunities to do so in the next few years.

Brooklyn’s draft picks would almost certainly be involved in this deal here, but the Rockets would probably have to part with a premium young player like Jalen Green to make a trade of this magnitude. That’s a tough pill to swallow, but Green’s best-case scenario is something like what Young is now. He’ll never be Young’s equal as a passer, and he’s a significantly better athlete, but you draft someone like Green hoping he can be the primary ball-handler of an elite offense. Young already is one. It’s a sacrifice worth making if need be. Young could be the face of the Rockets for a decade.