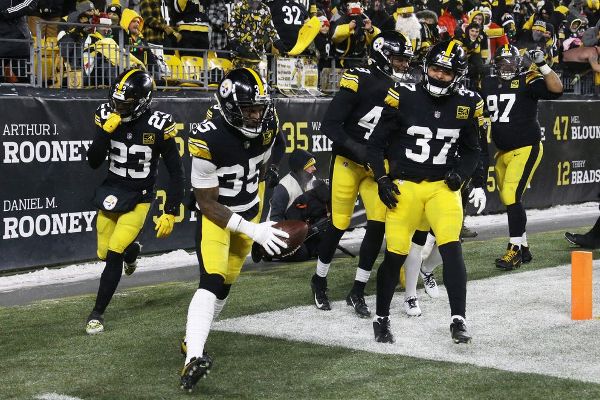 PITTSBURGH — Kenny Pickett threw a 14-yard touchdown pass to George Pickens with 46 seconds remaining, and the Pittsburgh Steelers capped three days of tributes to the late Franco Harris with a 13-10 victory over the Las Vegas Raiders on Saturday night.On the same night the Steelers retired Harris’ No. 32 — the Hall of Fame running back died Wednesday at age 72 — Pittsburgh (7-8) kept its faint playoff hopes alive by delivering another last-second victory over the Raiders. Las Vegas (6-9) was pushed to the brink of elimination from the postseason.A day after the 50th anniversary of Harris’ “Immaculate Reception” win over the Raiders in the 1972 playoffs, Pickett deftly drove the Steelers 76 yards in 10 plays, the last a dart over the middle to a wide-open Pickens in the end zone.1 RelatedPickett completed 26 of 39 for 244 yards with a touchdown and an interception. Tight end Pat Freiermuth caught seven passes for 66 yards and Najee Harris had 95 total yards as the Steelers won for the fifth time in seven games.Derek Carr threw for 174 yards with a touchdown and three interceptions, the last one a floater down the middle of the field that was picked off by Cam Sutton with 29 seconds to go. Pittsburgh rookie Connor Heyward ran for a first down to help the Steelers run out of the clock.The Raiders, coming off a dramatic last-play victory over New England last week, reverted to their form from earlier this season by losing their eighth one-score game of the year. They could be eliminated from the playoffs by the end of the week.The Steelers paid tribute to Harris in various ways during a bitterly cold night. Players wore replicas of his jersey while entering the stadium. Defensive captain Cam Heyward ran onto the field waving a massive flag with Harris’ number, and Pickett even shouted “Franco! Franco!” during his cadence before converting a quarterback sneak in the first half.Still, it looked like it wouldn’t be enough. While Pittsburgh moved the ball with ease at times, it continued to struggle once it got near the end zone. Pickett threw an interception in the third quarter – his first in 145 attempts — and Chris Boswell missed a pair of field goals.Carr started crisply in the 8-degree weather — the coldest home game for the Steelers since 1989 — and finished off a 14-play, 71-yard opening drive with a 14-yard touchdown strike to Hunter Renfrow.Yet Las Vegas let the Steelers hang around, and Pickett — whose name was announced by Harris when Pittsburgh took him with the 20th overall pick in last spring’s draft – provided the first signature moment of what the Steelers hope will be a decorated career.HONORING HARRISWhat was supposed to become a celebratory weekend for one of the NFL’s marquee franchises turned bittersweet when Harris died just two days before the 50th anniversary of his “Immaculate Reception” against the Raiders in the 1972 playoffs.The halftime ceremony featured many of Harris’ teammates from the 1970s Steelers dynasty. His widow, Dana Dokmanovich, and their son, Dok, joined Pittsburgh president Art Rooney II on stage. Dokmanovich leaned into Rooney after he handed her Harris’ jersey, and Pittsburgh Hall of Fame defensive end Joe Greene brushed away tears.The Associated Press contributed to this story.