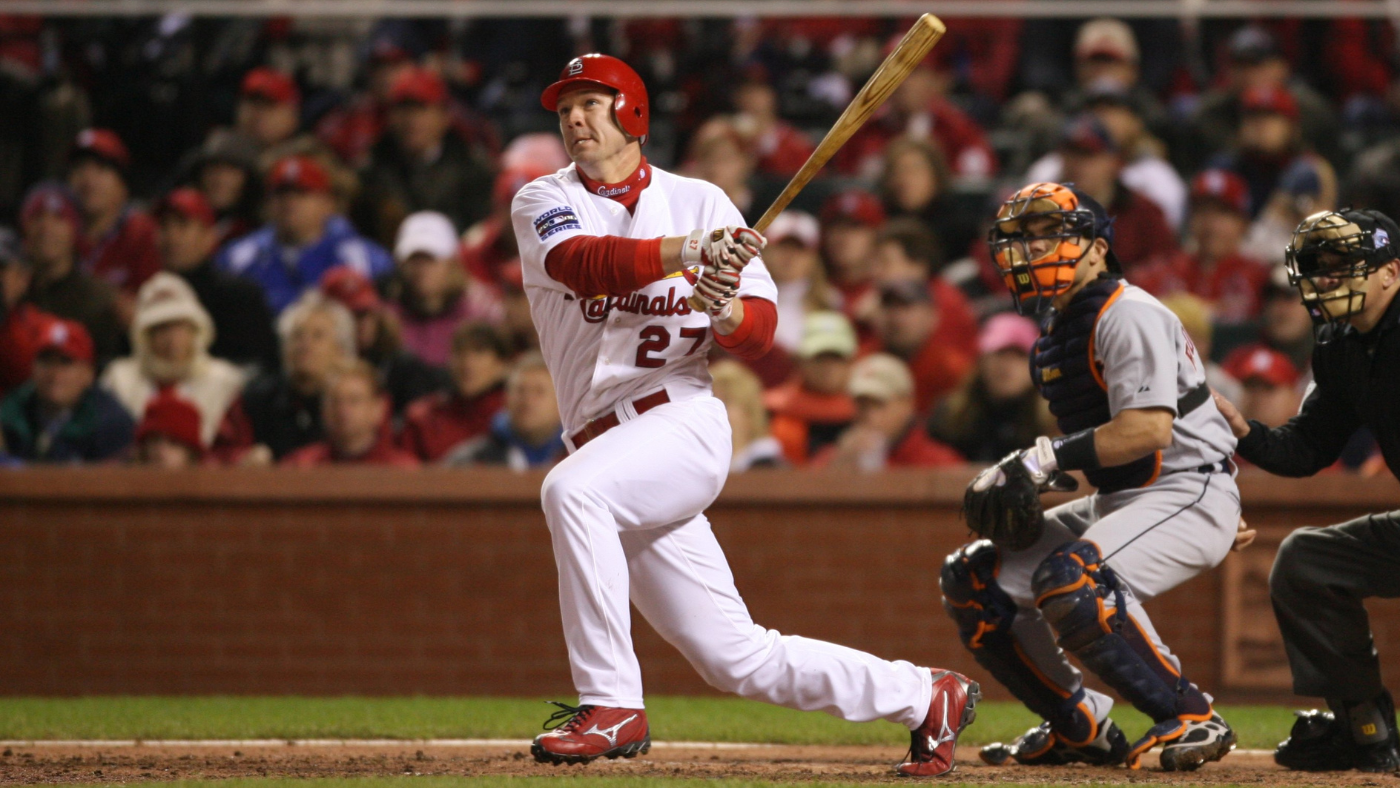 We already know that Fred McGriff is going to be part of the 2023 Baseball Hall of Fame class. He made it via the Era Committee, for players that had already fallen off the Baseball Writers’ Association of America (BBWAA) ballot. In terms of the latter ballot, the player with the best chance to make it this time around appears to be Scott Rolen. Rolen got 63.2 percent of the vote last time around, easily the top returner in that aspect. The best newcomer is Carlos Beltrán and I’ve already explored his now-complicated case. I’ve looked into Rolen’s case before and I’ll do that again here in a bit with a somewhat different angle. First, though, let’s take a look at recent history in voting trends and why things could bode well for Rolen, even if not in 2023. Hang onto that 63.2 percent figure. I’ll go back through players who got at least 62 percent — to give a little more buffer — but not the 75-percent threshold (which is required for enshrinement in the Hall). In 2021, Curt Schilling got 71.1 percent of the vote and he fell backward in 2022. We have to mention him, but his case is special because he straight up told everyone to not vote for him and it looks like around 13 percent of the voting body essentially said, “yes, sir!” last time around. In 2020, it was again Schilling at 70 percent and, to reiterate, he doesn’t really count. In 2018, Edgar Martinez got 70.4 percent of the vote while Mike Mussina got 63.5. Both topped 75 percent the following year. In 2017, Trevor Hoffman netted 74 percent while Vladimir Guerrero got 71.7. Both went in on the next vote. In 2016, it was Jeff Bagwell at 71.6, Tim Raines at 69.8 and Hoffman at 67.3. Obviously, we already mentioned it took Hoffman until the 2018 vote. Bagwell and Raines both made it in 2017. For the 2015 vote, it was Mike Piazza at 69.9. He made it the following year. Back to 2014, Craig Biggio narrowly missed at 74.8 percent but made it the next time around. If I went all the way back to 2000, there have been 18 different players to get at least 62 percent of the vote while coming short of 75. The only players who didn’t end up later getting to 75 percent were Jack Morris (who is now in the Hall of Fame anyway) and Schilling (no need to further discuss, as it doesn’t look like Rolen is going to tell everyone on Facebook to not vote for him).

It did take multiple times between 62 and 75 percent for Gary Carter, Jim Rice, Goose Gossage, Andre Dawson, Bert Blyleven, Biggio and Hoffman before they made it. This means history says Rolen has a very strong chance of getting into the Hall of Fame and that even if he misses the 75-percent mark this time around, that remains the case moving forward. Morris was the true outlier and still made it via a committee vote. As far as Rolen’s case, I couldn’t help but recall another third baseman who ended up making the Hall of Fame via a committee, sadly, after his death. That would be Cubs legend Ron Santo.

If you look at Santo’s statistical similars on Baseball-Reference, Rolen is number two. Fortunately, things are evolving to the point with the voting body that Rolen is getting the respect that Santo should have gotten decades ago. Santo got 3.9 percent of the vote in his first try. It’s maddening just typing it out, even though I was a toddler at the time. He topped out at 43.1 percent and didn’t make it until 2012. He would have been 72 years old, had he still been alive. Rolen is 47. He won’t likely be waiting decades. Both players were third baseman and it’s a position that remains under-represented in the Hall. Here’s a breakdown by position, excluding pitcher and DH: Catcher: 19First base: 26Second base: 20Third base: 17Left field: 23Center field: 24Right field: 27

No, everything doesn’t have to be even, but it certainly seems like we could stand to see a few more catchers, second basemen and third basemen (checking in at last place) in the Hall. Santo was a victim of the time period. He hit .277, which wasn’t eye-popping at the time, but thanks to taking a ton of walks (he led the league four times), he had an excellent .362 on-base percentage. Throwing in his power, he had a 125 OPS+, meaning he was 25 percent better than the average hitter at getting on base and hitting for power throughout his entire career. Just to give a general idea, Francisco Lindor had a 125 OPS+ this past season, finishing ninth in NL MVP voting. Santo was also a great defender, but played at the same time as Brooks Robinson, so he was overshadowed there through no fault of his own.

In those days, they didn’t have WAR. If they did and paid attention to it, Santo would’ve made the Hall decades ago. Santo amassed 70.5 WAR in his career. Rolen had 70.1. Rolen was overshadowed by playing through the so-called Steroid Era and then the aftermath, so people were numb to gaudy offensive numbers and didn’t pay nearly as much attention to defense as we do these days. This isn’t to say Rolen was as good as Santo. Santo’s peak was better (in JAWS, there’s a WAR7 figure for a player’s best seven seasons and Santo’s 53.8 trails only Mike Schmidt, Wade Boggs and Eddie Mathews at third base while Rolen’s 43.6 ranks 15th), but being a bit worse than a current Hall of Famer hardly disqualifies someone.

Rolen won the 1997 Rookie of the Year, was a seven-time All-Star and eight-time Gold Glove winner. He played in five different postseasons and won a World Series. He hit .421 with three doubles and a home run in the five games in that World Series. He also hit .310 with two doubles, three homers and six RBI in a pennant-winning NLCS in 2004. Among third basemen, he ranks 10th in WAR and has more than the average Hall of Fame third baseman. In JAWS, he’s also 10th and above the average current Hall of Fame third baseman. And, again, third base is under-represented. The picture as a whole says he compares decently with current Hall of Famers, just not the inner-circle greats like Schmidt, Mathews and Boggs. If we accept the premise that there should be more third basemen in the Hall, Rolen is a fine place to start. We’ve gone over, time and time again, how the Hall of Fame isn’t just the inner-circle greats. It hasn’t been since about the first two classes pre-WWII. There’s long been room for the likes of George Kell, Pie Traynor and Jimmy Collins.

Santo belonged in the Hall for far too long before finally making it posthumously. Fortunately, it looks like the voting body has evolved enough to give Rolen his due much sooner. He might have to wait another year, but he’s on his way.