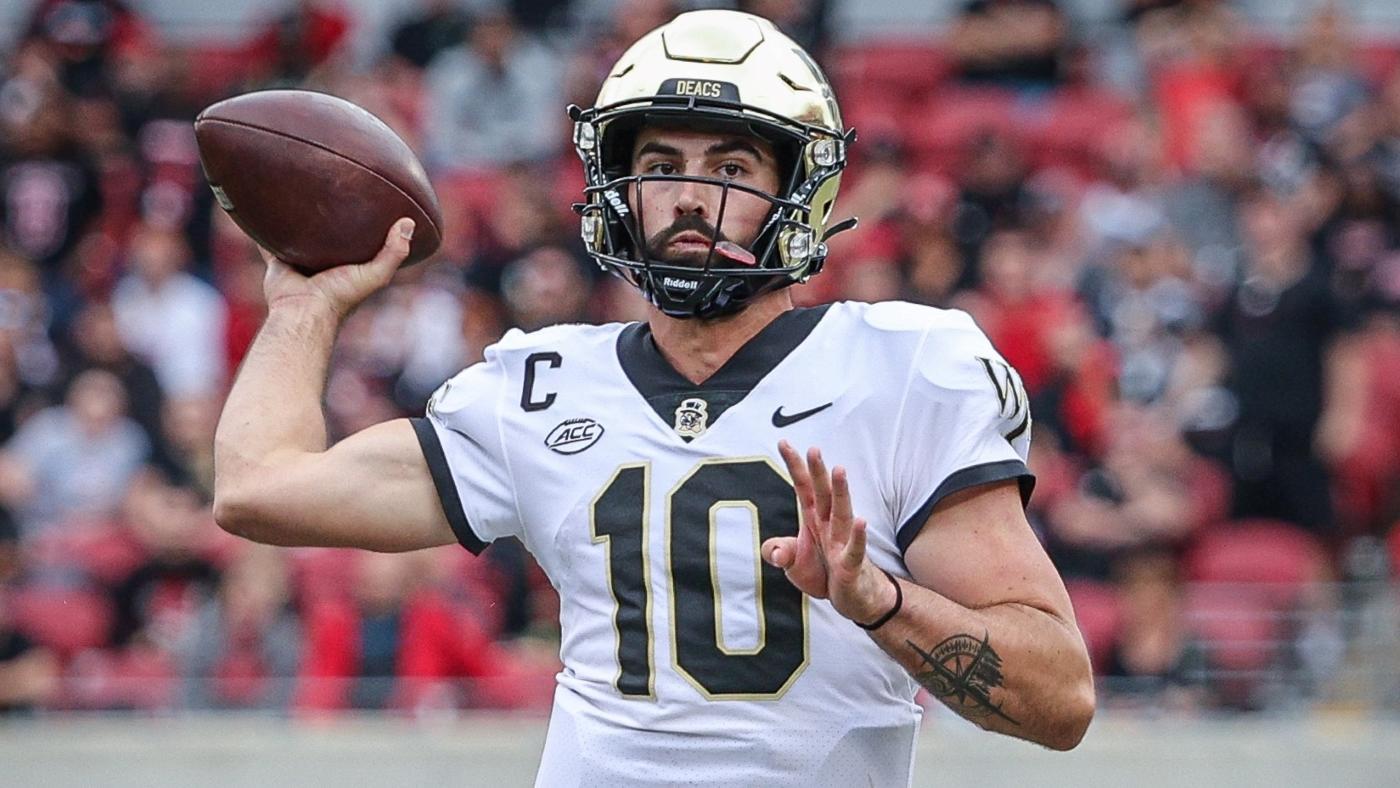 Happy Friday, everybody. It’s the holiday season, and I’m here to send you into the weekend with a gift because it’s cold out, and you deserve it. It’s an odd weekend with Christmas falling on Sunday because we get only one college football game on Saturday, while we’ll have nearly an entire NFL slate.Then we get three more NFL games on Christmas Day and the full NBA slate. And speaking of those Christmas NBA games, lines aren’t posted yet, but here are some bonus picks for you: as soon as they’re up, take the unders in the early NBA games on Sunday. Christmas morning unders in the NBA has been a good play for a long time.I’ve also got a bunch more picks to tide you over until then, as well as these wonderful stories to read.Time to throw some logs on the fire.All times Eastern, and all odds via Caesars Sportsbook 🔥 The Hot Ticket Wake Forest vs. Missouri, 6:30 p.m. | TV: ESPN

Key Trend: Wake Forest is 5-1 ATS in its last six nonconference gamesThe Pick: Wake Forest -2.5 (-110)Betting bowl games is always complicated, but sometimes there are obvious plays that maybe the rest of the market hasn’t caught onto. This is the Gasparilla Bowl, and it’s being played on a Friday night before a holiday weekend. It’s not getting the most attention, and perhaps that’s why Wake Forest remains a 2.5-point favorite when it should be favored by a lot more.

Missouri will be missing a lot of its best players. The team’s leading receiver Dominic Lovett entered the transfer portal as soon as the regular season ended and announced he was going to Georgia earlier this week. On defense, defensive ends Isaiah McGuire and D.J. Coleman led the Tigers in sacks, combining for 13 of them and 23.5 tackles for loss. They’ve opted out to prepare for the draft. Defensive back Martez Manuel was third on the team in sacks with four and had nine tackles for loss. He’s not playing tonight, either.Jonathan Coachman is joined by Emory Hunt and Chip Patterson to dish out Friday’s best bets! Download and follow The Early Edge on Apple Podcasts and Spotify. So the Tigers are missing their leading receiver and three of their best players on defense, and this is a team that was led by its defense all season.

Meanwhile, the greatest quarterback in Wake Forest history has already announced this will be his final game with the Demon Deacons. Whether he’s going to the NFL or transferring, we don’t know, but he’s already the program’s all-time leader in passing touchdowns and could become its leader in passing yardage tonight. He could also set a few ACC records, and his favorite target A.T. Perry (70 receptions, 980 yards, 11 TD), has decided to play tonight to help his boy get them.So Mizzou’s best players are taking the night off, while Wake’s are sticking around to achieve some goals. Which team do you want to bet on?Here’s what SportsLine is saying about the game: The Projection Model doesn’t love it, but it’s got a healthy lean toward Wake Forest on the spread tonight as well.

The Pick: Spurs +6.5 (-110) — Have you watched much of the Orlando Magic this season? As a team, they are not good, but they have some very interesting players, particularly rookie Paolo Banchero. He’s looking like an absolute stud so far, but not enough of one to let me trust the Magic as this heavy a favorite at home. Defensively the Magic aren’t terrible, but as good as Banchero is, the Orlando offense sometimes gets constipated.That might not be a problem tonight against a San Antonio team that ranks last in the league in net efficiency but has been playing much better on the offensive end lately. This strikes me as a spot where Orlando is getting a little too much credit in the market after winning four of its last five games. It might make it five of six tonight, but it’ll be a sweat.Raptors at Cavs, 7:30 p.m. | TV: NBA League Pass

The Pick: Under 215 (-110) — The Cavs have been one of the best teams in the East this season because they’re dang near impossible to score against. While Donovan Mitchell has been a revelation for them following an off-season trade, it’s a defensive efficiency of 106.8 that ranks as the best in the league. It’s that defense I’m betting on keeping this a low-scoring affair tonight.

The Raptors have been hot offensively lately, but most of the damage was done against bad defenses. In their last two games — both on the road against solid defenses — their offensive efficiency hasn’t been great, though Pascal Siakam’s 52 points against the Knicks hides it a bit. This game could be pretty ugly.🏀 College BasketballSMU at Utah State, 7 p.m. | TV: ESPN2

The Pick: Under 145.5 (-110) — Do you know how you feel today, the Friday before a holiday weekend? Well, you aren’t alone in that feeling. Everybody feels it, even college basketball players. Imagine you’re a college basketball player playing in a holiday tournament far away from home in Hawaii, and you’re being tasked with playing for the second consecutive day. That’s where SMU and Utah State are tonight.So we’ve got a neutral site game between teams with tired legs who probably wish they were home with their families right now. Something tells me the effort level won’t be at an all-time high tonight. Sure, this could blow up in our faces and lead to absolutely nobody playing any defense and a layup festival breaking out. But I doubt it. Odds are we’ll see a lot of lazy offense and bad shots.

The Pick: Under 32 (-110) — The weather will be wild all across the country for NFL games this weekend. While I’m trying to ignore the idea of my fantasy football season being decided by frigid temperatures and ridiculous winds, I can at least try to take advantage of it by gambling on the games. Plus, don’t you want to experience the thrill of taking an under in a game with a total this low?The forecast for this one has temperatures in the single digits and 27mph winds. That’s right, 27mph winds howling through FirstEnergy Stadium in Cleveland. Dog masks could be ripped off of heads by the wind. Passing will be nigh impossible. Field goals? Good luck. This is going to look like an Army-Navy game.Texans at Titans, Saturday, 1 p.m. | TV: CBS

The Pick: Texans +3 (+100) — Malik Willis has already started two games for the Titans, including earlier this season against these same Houston Texans, but even if the Titans won that game, you won’t catch me betting on Willis as a favorite. Not even against the Texans. The Titans are coming into this one on a four-game losing streak, and those losses came with Ryan Tannehill. This isn’t the same kind of Titans team we’ve seen in the last few years.

Meanwhile, the Texans are bad, and they should be losing as many games as possible, but they’re playing hard! They took the Chiefs to overtime last week and hung with the Cowboys the week before. I see a similar situation here where the Texans hang around and have a shot at winning this game come the fourth quarter.🔒 SportsLine Pick of the Day: The Projection Model is hitting the hardwood tonight with an A-graded play for the Clippers and 76ers.