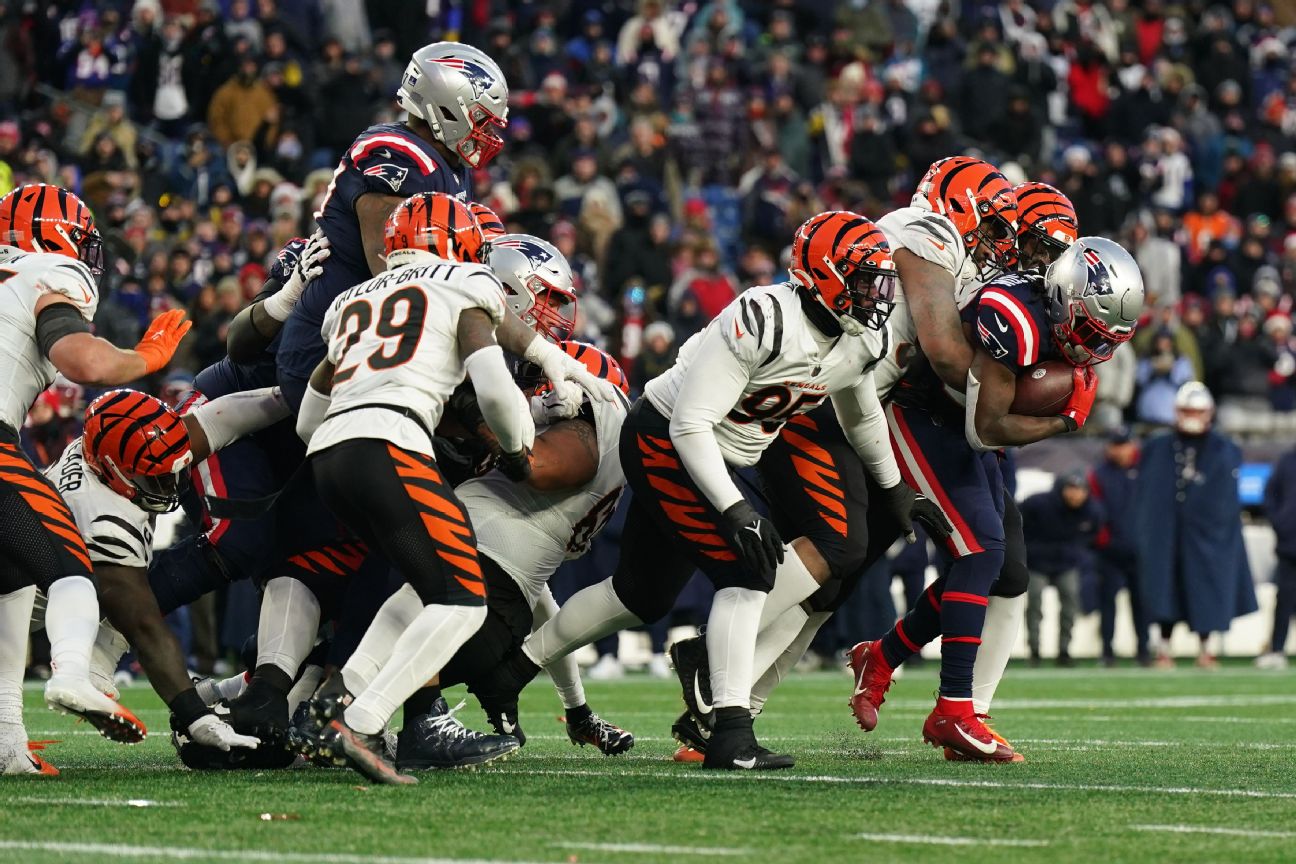 FOXBOROUGH, Mass. — Another week, another late-game gaffe that cost the New England Patriots a chance to win.Running back Rhamondre Stevenson lost a fumble at the Cincinnati Bengals’ 8-yard line with 59 seconds remaining, as the Patriots were knocking on the door for a potential go-ahead touchdown on Saturday. The miscue was the defining play in another heartbreaking defeat, coming one week after Stevenson was involved in a fateful lateral play with no time left in a loss at the Las Vegas Raiders.The Bengals prevailed 22-18.”I was trying to make something happen, probably doing more than I was supposed to do. Probably should have just went down,” Stevenson said.1 RelatedThe lack of situational awareness might have once been considered stunning for a Bill Belichick-coached team, but it’s been more of the norm in the team’s 7-8 season.The Patriots haven’t been officially eliminated from playoff contention, but a sense of resignation seemed prevalent among some players after Saturday’s game in which they trailed 22-0 at halftime before making a charge in the second half.”It was on the line with that win or loss, so it’s just a tough one,” veteran New England safety Adrian Phillips said. “We blew it.”As outside linebacker Matthew Judon added, “We are a resilient group, but stuff hasn’t been going our way. Sometimes you have games like that, and it seems like we’re having a season like that.”The Patriots will host the Miami Dolphins next Sunday, before their regular-season finale at the Buffalo Bills in Week 18.As for Stevenson’s fumble on Saturday, it was his first since the opening game of his rookie season in 2021. Belichick said the Patriots were attempting to control the clock, knowing Cincinnati was out of timeouts, while positioning themselves for what they hoped was a game-winning touchdown.Bengals defensive lineman DJ Reader stood up Stevenson, and safety Vonn Bell ripped the ball away after Stevenson was driven back three yards behind the line of scrimmage.Referee Craig Wrolstad said in a pool report that it wasn’t a consideration to declare that Stevenson’s forward progress was stopped, explaining: “In order to have forward progress, the runner has to be controlled by the defense. He has to be held and controlled, and basically have his feet taken away. We felt that he still had his feet.”Stevenson was asked if he felt his forward progress was stopped.”It doesn’t really matter what I think. They called it a fumble, and [the Bengals] recovered the ball. It’s whatever they called,” Stevenson said. “I was fighting for extra yards.”Teammates stood behind Stevenson, the Patriots’ leading rusher.”If you go back and look at our whole season, he has been pretty much our best player on the offensive side of the ball,” Phillips said. “Things didn’t swing his way today. He is still the dawg, and we love him. Nobody needs to say anything because he already is the type of player to put it on himself.”Even if Stevenson didn’t fumble, there was no certainty that the Patriots would have scored a touchdown. They entered the day as the NFL’s last-ranked red zone offense, having scored just 14 touchdowns in 37 trips (37.8%).They did score on their first red zone trip against Cincinnati, but after digging themselves such a significant halftime deficit, their overall margin for error was thinned.In some ways, the game was a microcosm of New England’s season.”When we’re focused and locked in, it looks good. But when we’re not, it doesn’t,” Judon said. “That’s who we are. I mean, at this point, you showed your hand.”