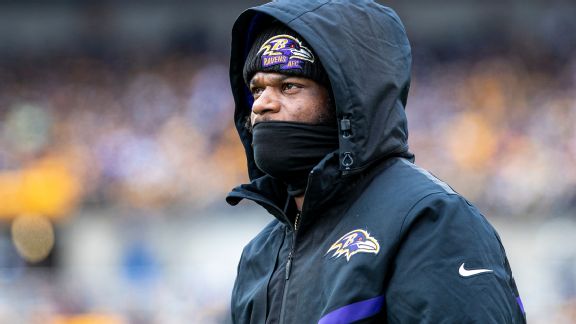 OWINGS MILLS, Md. — Baltimore Ravens coach John Harbaugh was succinct Monday about the availability of quarterback Lamar Jackson for Sunday night’s game against the Pittsburgh Steelers (8:20 p.m, ET, NBC).Jackson has been sidelined since injuring a knee Dec. 4, and Baltimore has scored two touchdowns in three weeks without him.Asked whether he expected Jackson to practice this week, Harbaugh said, “We’ll just have to see.”After Baltimore clinched a playoff berth with Sunday’s 17-9 win over the Atlanta Falcons, the biggest question became the return date for Jackson. He sprained a PCL, a source told ESPN’s Adam Schefter, which is an injury from which most players take one to three weeks to recover.Everything you need this week:• Full schedule » | Standings »• Depth charts for every team »• Transactions » | Injuries »• Football Power Index rankings »More NFL coverage »
Last season, Jackson injured an ankle in Week 14 (Dec. 12) and missed the final four games of the season. This year, Jackson was injured in Week 13 and was initially listed as “week to week” by Harbaugh.Asked Monday whether he still believed Jackson would return this season, Harbaugh said, “Sure, of course.”There’s no certainty Jackson will start against the Steelers even if he returns to practice this week. The Ravens and Jackson will have to evaluate how he looks and feels after getting back on the field.Jackson’s style of play relies so much on his mobility, and this type of injury can limit his effectiveness more than it would a pure dropback passer. Through the first 11 weeks of the season, Jackson ran for 755 yards (12th most in the NFL at the time) and averaged 6.8 yards per rush (third best in the league).The Ravens could use Jackson to return now to help in their pursuit of the AFC North title and a home game in the wild-card round. But Baltimore also knows it needs Jackson as healthy as possible to have its best chance at making a championship run.Here is where the Ravens rank in Jackson’s three-game absence:30th in points (12.0 points per game)21st in total yards (310.7)31st in passing (111.7)32nd in red zone (22.2% efficiency)Ravens running back Gus Edwards, who ran for 99 yards Saturday, said the whole offense came into that game with the “had-to” attitude to run the ball. Baltimore ran the ball on 32 of 51 offensive plays (63%).Ravens quarterback Tyler Huntley was 9-of-17 for 115 yards and had one touchdown. This tied for the fewest completions in a Baltimore win in the 15-year Harbaugh era.“With a great player like Lamar and what he brings to the NFL, that’s missed on the field,” Huntley said. “We just go about trying to win 1-0 on the weekend. We just keep chewing away at that every week.”The Ravens (10-5) can win their first AFC North title in three years by winning their final two games: home against the Steelers and at the Bengals.