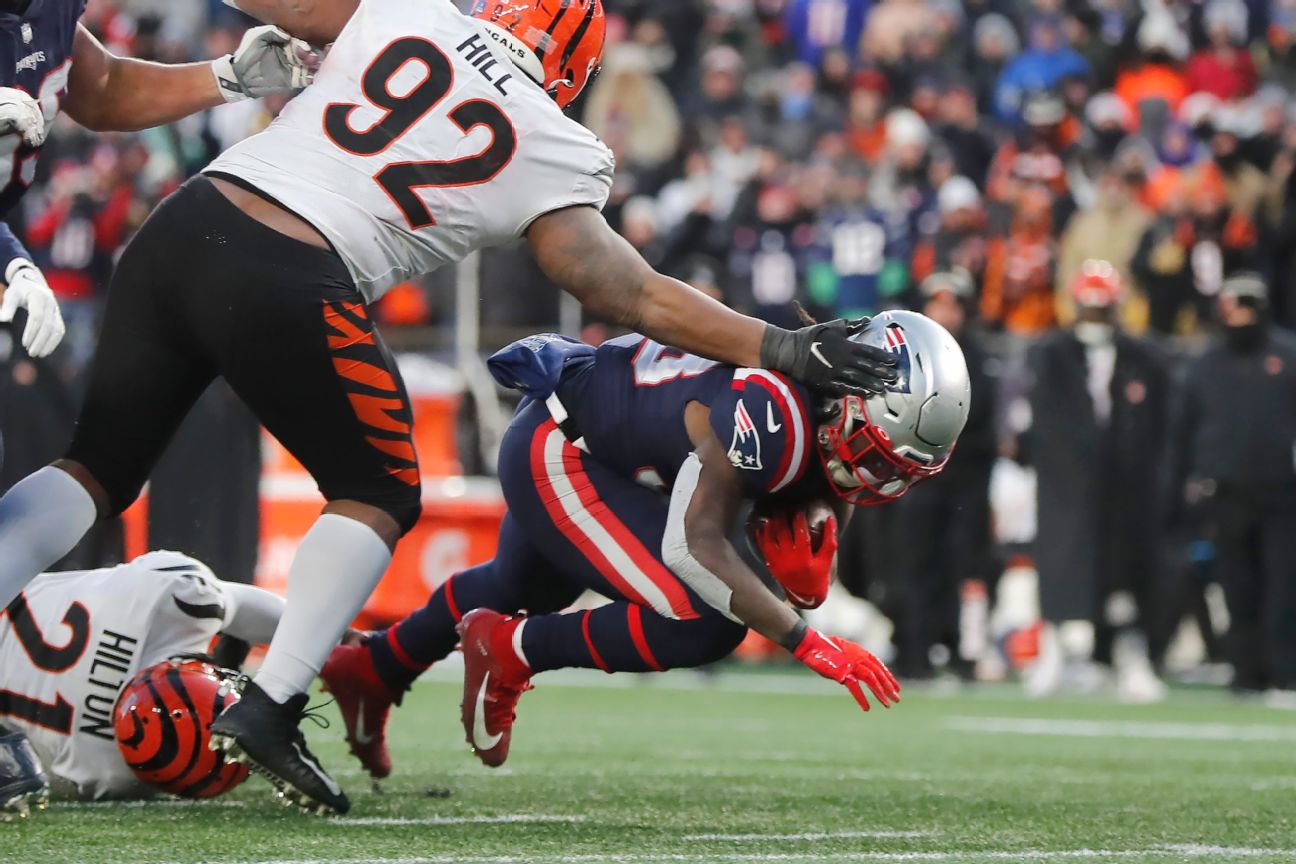 FOXBOROUGH, Mass. — New England Patriots coach Bill Belichick spared running back Rhamondre Stevenson for his late fumble that cost the team a chance to score a potential go-ahead touchdown in Saturday’s 22-18 loss to the Cincinnati Bengals.”I’m not going to second-guess Rhamondre on what he did,” Belichick said Monday morning in his first public remarks since reviewing the game.”Rhamondre’s ball security has been pretty good all year. He had two hands on the ball, they were running him back, and they knocked it out at the end.”1 RelatedLater during his weekly interview on sports radio WEEI, Belichick was asked if there might be concern that the miscue affects Stevenson in the coming weeks. He said: “Rhamondre is a really good competitor. He’s one of our best players. I’m sure he’ll be ready to go.”Belichick, who has benched running backs in the past for ball security struggles, might have believed Stevenson’s forward progress was stopped on the key play, although he didn’t say so directly.Referee Craig Wrolstad said in a pool report after the game: “In order to have forward progress, the runner has to be controlled by the defense. He has to be held and controlled, and basically have his feet taken away. We felt that he still had his feet.”The fumble ultimately extinguished the Patriots’ comeback hopes after they dug themselves a 22-0 halftime deficit.Trailing 22-18 with 1:05 remaining, they had the ball at the Bengals’ 5-yard line, and Cincinnati was out of timeouts. Belichick explained that the strategy was a balance between “trying to score and trying to control the clock” when the Patriots handed off to Stevenson on first-and-goal.The 6-foot-0, 225-pound Stevenson was stood up by defensive tackle DJ Reader, driven back 3 yards, and had the ball stripped by safety Vonn Bell. Defensive tackle Josh Tupou recovered.Stevenson, who leads the team with 944 yards on 196 carries and five touchdowns, hadn’t lost a fumble since the first game of his rookie season in 2021.”I was trying to make something happen, probably doing more than I was supposed to do. Probably should have just went down,” he said after the game.The Patriots (7-8) host the Miami Dolphins (8-7) on Sunday.They would qualify for the playoffs by beating Miami and then recording a victory over the Buffalo Bills on the road in the final week of the season. The Patriots have other scenarios in which they would qualify for the postseason, but winning the final two games is their most direct path.