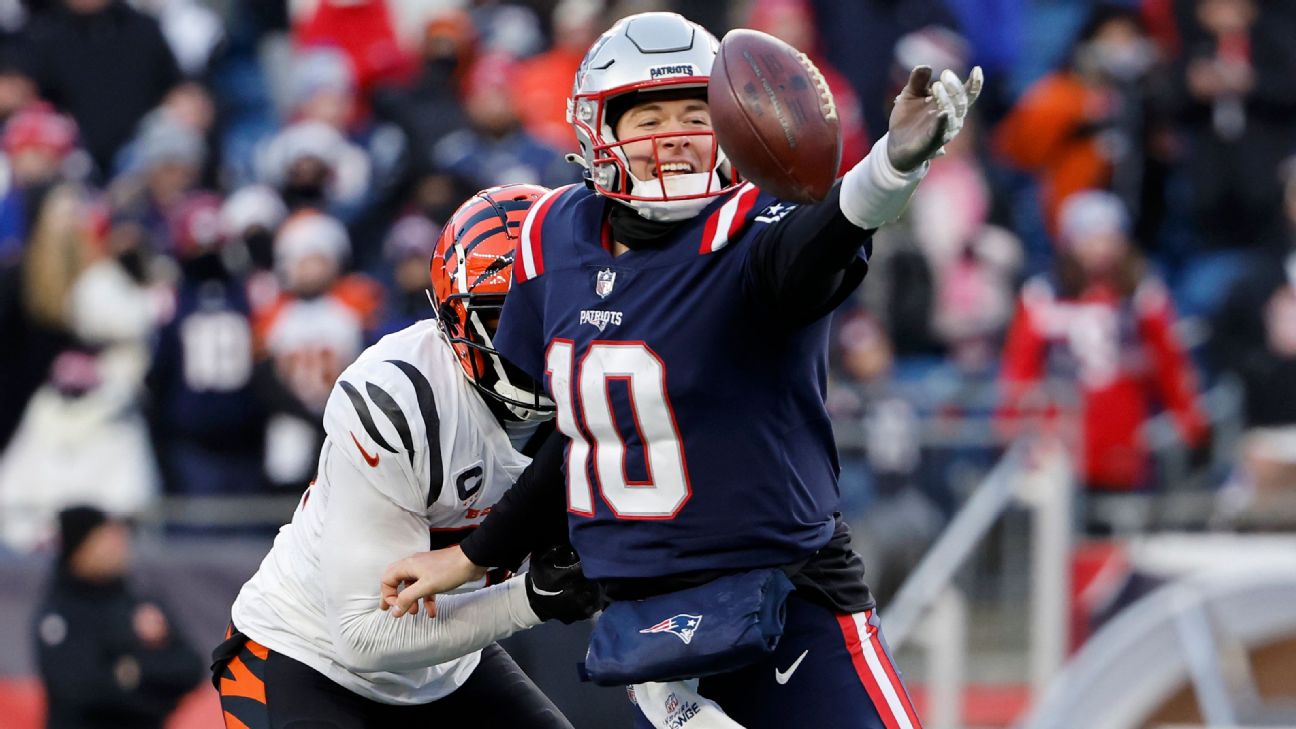 FOXBOROUGH, Mass. — New England Patriots quarterback Mac Jones responded to Cincinnati Bengals cornerback Eli Apple calling him out for what he felt was a dirty play in Saturday’s game, saying there were no bad intentions.The NFL is reviewing the play, per a source, which is standard operating procedure in every game as part of its on-field code of conduct for all players. Those who are deemed to be in violation are subject to financial fines.The play that raised Apple’s ire came with 6:18 remaining in the fourth quarter, on second-and-11 from the Bengals’ 30-yard line, when Jones underhanded an incomplete pass while in the grasp of Bengals safety Vonn Bell.1 RelatedReferee Craig Wrolstad blew the play dead and signaled incomplete, while linebacker Germaine Pratt scooped up the loose ball and raced toward the end zone with the possibility it could be overturned to a fumble.On the runback, Pratt was being trailed by Patriots receiver Tyquan Thornton, and Jones also sprinted in that direction with hopes of catching him. By the time Jones reached the 26-yard line, he dropped to the ground in front of Apple, who was also sprinting down the field.After the game, a 22-18 Bengals win, Apple told NESN.com: “He tripped me. I thought it was a dirty play. He’s done that before, I’ve seen it.”Jones explained his view of the play during his radio interview Monday.”I went down in front of him to kind of get in the way to stop him from slowing down Tyquan, who obviously could make the tackle there,” he said on WEEI. “So just kind of went down in front of him, trying to stop a fast guy from getting to another fast guy.”It’s a split-second decision and there’s a lot that goes into it. You’re out there trying to compete, it’s a physical game. So just trying to help the team win.”I have all the respect for Eli and the Bengals. They played a great game. So, there’s no hard feelings and definitely no intention to hurt anybody on that play. Nor do I believe that when I’m playing quarterback, that’s what [the defense is intending to do]; I get hit a lot, too. We’re all out there playing hard. It’s just part of the game.”Jones was asked if he was aware the play had been ruled incomplete and stopped.”No, honestly was just playing the play, I saw Tyquan running, and we were running to get him,” he said. “At that point you have to play the play all the way through, because you don’t know what’s happening — if they’re going to review it, if they’re not going to review it. So just had to play it through and try to make the right play and slow everything down.”