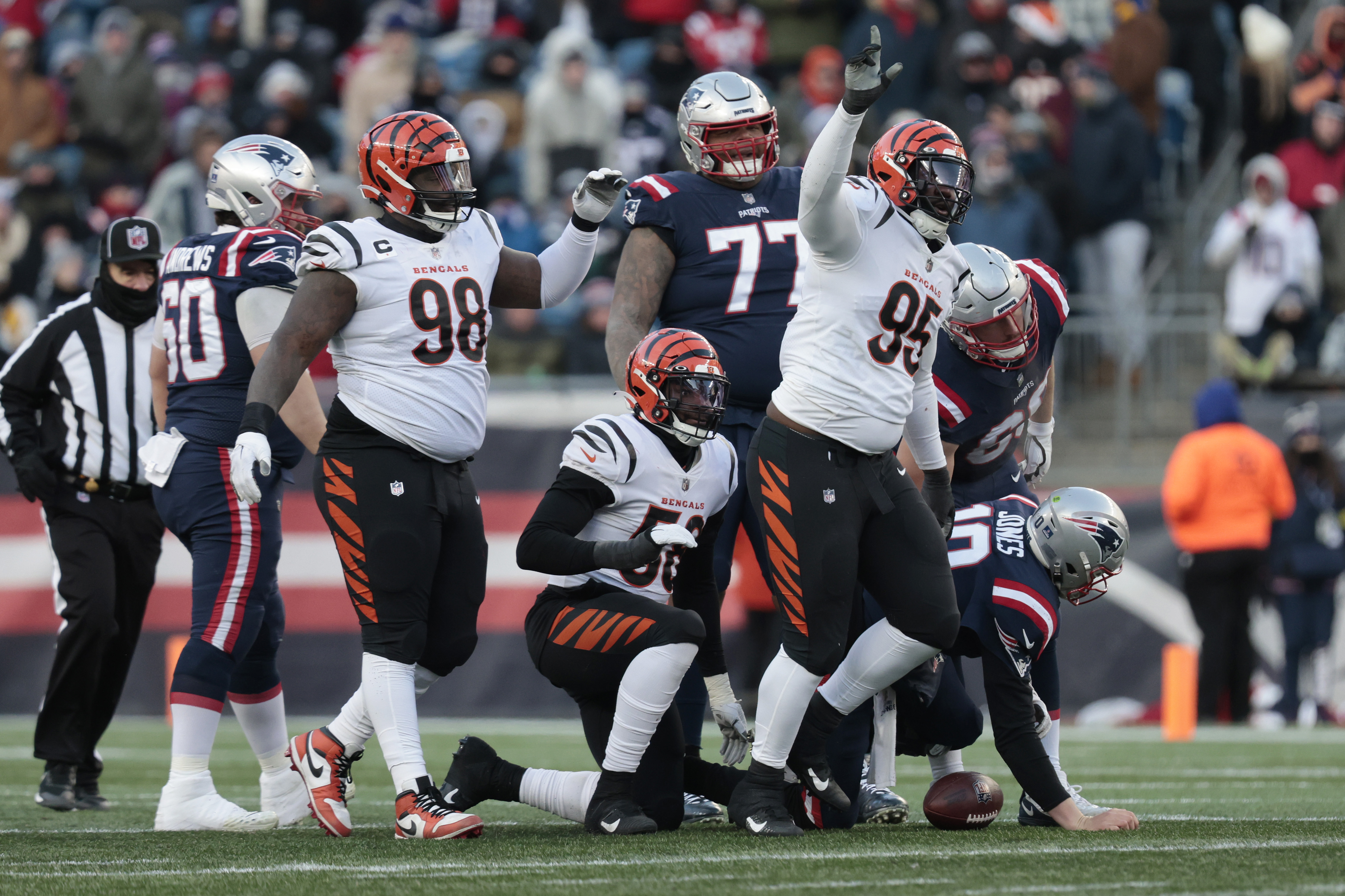 Henry McKenna AFC East Reporter Mac Jones said last week that the New England Patriots couldn’t give up. Their playoff chances had fallen off a cliff after a humiliating loss to the Las Vegas Raiders. (You’ve seen the Las Vegas Lateral by now, right?) But the Patriots had a long way to go before season’s end. Give New England credit — it didn’t give up.The Patriots lost, 22-18, to the Cincinnati Bengals in Week 16. They played hard through four quarters, even when the Bengals took a 22-0 lead at halftime. The second half was an entirely different story, but in the first half, the Patriots looked completely at a loss. Their defense had no answer for Cincy’s offense. New England’s offense — particularly its passing offense — looked completely unsure of … just about everything.The offensive line looked unsure setting its protections.Jones looks unsure in the pocket — afraid of imminent QB hits.The receivers looked unsure downfield.The play design and play-calling problems looked as severely problematic as ever. On third downs, Jones was forced to throw to pass-catchers short of the sticks. And while that can work if the receiver has room to run — thanks to unique speed or unique play-design — these plays did not generate first downs, as usual. If there was an image of dysfunction that suited the Patriots, it was the moment when Hunter Henry and Jonnu Smith collided during a passing play. Smith knocked Henry out of the game.Even when Jones started to take risks and fire downfield (with confidence), his receivers couldn’t help him out. Jones hit rookie receiver Tyquan Thornton on the hands on a ball that traveled 55 yards downfield. And Thornton dropped it. The next play, Jones fired the ball for receiver Kendrick Bourne about 25 yards downfield. The ball bounced off Bourne’s facemask.The second half was a different story.It almost felt like the pendulum of luck was swinging in their direction. New England managed a Hail Mary touchdown for 48 yards on a play where tight end Scotty Washington kinda-sorta tipped the ball to Jakobi Meyers in a way that looked like a lateral.That seemed like a poetic twist that could inspire newfound confidence. Maybe they’d lost on an embarrassing lateral last week. Maybe they’d win because of an insane lateral this week.Cornerback, receiver, punt returner and kick returner Marcus Jones managed a pick-six, a fumble recovery and a 15-yard catch. He played an instrumental role in the almost-comeback.Even with all that going the Patriots’ way, they still lost. Their final drive was an embarrassment, with a delay of game penalty and, on their final offensive play, an ineligible man downfield. Their penultimate drive ended with a Rhamondre Stevenson fumble in the red zone. It was downright awful — and probably excruciating for Patriots fans.Let’s move on, shall we?Patriots fans have seen this stuff all season long. They’ve watched Bill Belichick’s offensive staff sink a passing offense that showed promise last season. So let’s look at the big picture, rather than dumping on them (like I’ve done all year).I can’t imagine it’s a coincidence that, in the hours before this game, NFL Network’s Ian Rapoport reported that Alabama offensive coordinator Bill O’Brien is emerging as a frontrunner for the Patriots’ offensive coordinator gig next season.That’s not a coincidence. Surely, the Patriots had a sense they could not keep pace with Joe Burrow and Ja’Marr Chase. Surely, they wanted to put that information out into the world to give New England fans hope on a day that was mostly grim for the offense.If New England’s season wasn’t over last week, it’s officially dead now. The Patriots have a 10% chance of making the postseason, per FiveThirtyEight, with games against the Miami Dolphins and Buffalo Bills on the horizon.If the Patriots think O’Brien can help their offense, they shouldn’t wait for the offseason to get him in the building. They should hire him the second the score goes final in Alabama’s Bowl Game against Kansas State. They’re not going to change the offense radically, but at least they can figure out what to make of the players they have — namely Jones and the receiving corps.Because while the young quarterback has mostly looked poised in a terrible situation, he hasn’t lifted New England. The Patriots shouldn’t actively pursue a new quarterback prospect. But New England should explore its options. Tom Brady and Jimmy Garoppolo will be mighty tempting for obvious reasons. It makes sense for the Patriots to pursue both pending free agents, especially with $56 million in salary-cap space. New England should begin its overhaul as soon as possible. It should get receivers Kendrick Bourne and Tyquan Thornton on the field to develop. It should get O’Brien in the building to begin planning for 2023. Matt Patricia can go back to the defense — or continue working as a run-game coordinator, which was the only strength of this offense. And, yes, the Patriots should see if they can upgrade at quarterback.The offensive overhaul should have begun yesterday. Belichick has to admit his mistake in appointing Patricia as the de-facto offensive coordinator. Belichick has to remake this offense.Top stories from FOX Sports:Prior to joining FOX Sports as the AFC East reporter, Henry McKenna spent seven years covering the Patriots for USA TODAY Sports Media Group and Boston Globe Media. Follow him on Twitter at @McKennAnalysis. Get more from National Football League Follow your favorites to get information about games, news and more