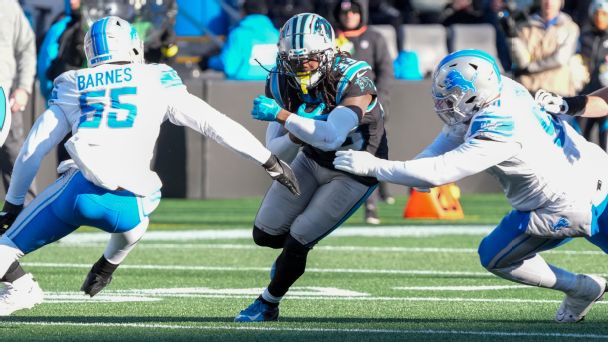 CHARLOTTE, N.C. – Carolina Panthers right tackle Taylor Moton had all the offensive linemen wear black ski masks to Friday’s walk-through, not just to fight the arctic blast that hit the South but to send a message that his group wouldn’t be embarrassed for the second week in a row.It wasn’t.On the coldest day for a home game in Bank of America Stadium history, the Panthers used a red-hot running game to beat the Detroit Lions 37-23 on Saturday to set up a showdown next week against the Tampa Bay Buccaneers for the NFC South lead.Carolina rushed for a single-game franchise record 320 yards, including a team-record 240 in the first half, during which Chuba Hubbard and D’Onta Foreman became the first pair of backs to each top 100 first-half rushing yards since the Jacksonville Jaguars in 2006.The offense overall was red hot with 570 total yards, blasting the team record of 548 against the Miami Dolphins in 2017.“Beat Christmas ever,’’ Moton said.The Panthers improved to 6-9, leaving them a half-game behind the Bucs (6-8), who play the Arizona Cardinals on Sunday.Simulate your own scenarios and check the latest playoff picture. Playoff Machine »• Full schedule » | Standings » | More »
Carolina can win the NFC South by winning at Tampa Bay next week and at New Orleans the following week.The rushing effort came a week after the Pittsburgh Steelers limited Carolina to 21 yards rushing. It happened on a day when the temperature at kickoff was 20 degrees, eclipsing Carolina’s 2010 record of 30 degrees in the season finale.It came after interim coach Steve Wilks challenged his line to re-establish control.Guard Austin Corbett said Moton’s idea with the ski masks was “perfect timing.’’Foreman, who finished with 165 yards rushing on 21 carries, said the masks symbolized a mindset the Panthers want to maintain the final two games with the playoffs still in reach.“The mentality, you know, how they were going to attack it,’’ he said of the line. “It was just the way they came in. I loved it.’’The mindset was evident from the get-go. Hubbard rushed for 30 yards on the game’s first play and 35 on the second. He later became the first player with three rushes of 30-plus yards in a half since Tampa Bay’s Doug Martin in 2012 and the first in a game since Isaiah Crowell of the New York Jets in 2018.Hubbard finished the first half with 109 yards rushing on six carries and had 125 yards on 12 carries by the end of the game.“Coach talked all week about ‘Let’s show our true character, our true identity,’’’ Hubbard said. “It showed.’’Quarterback Sam Darnold had a big day, too, in improving to 3-1 since taking over as the starter. He completed 15 of 22 pass attempts for 250 yards and a touchdown, and rushed four times for 21 yards and a touchdown.It was the type of complementary football Wilks, whose record is 5-5 as interim head coach, has emphasized since replacing Matt Rhule after a 1-4 start. It’s the type of football he believes opponents don’t want to see late in the season when players are banged up, particularly once they get into the playoffs.Smash-mouth football is his formula. It has helped the Panthers win three of their last four games, rushing for 185 or more yards in the wins. It’s a formula the team believes it can sustain against Tampa Bay and New Orleans.Carolina rushed for 173 yards in a 21-3 victory over the Bucs earlier this season, and Tampa Bay has been more vulnerable to the run of late, giving up 209 yards a few weeks ago to San Francisco.The Panthers had 145 yards rushing against New Orleans, ranked 23rd against the run, in an early-season win.“We talked all week about the true character of this football team will reveal itself by how we responded,’’ Wilks said. “We came out and played against a good football team, a really good football team.“Everything that we do starts up front.’’