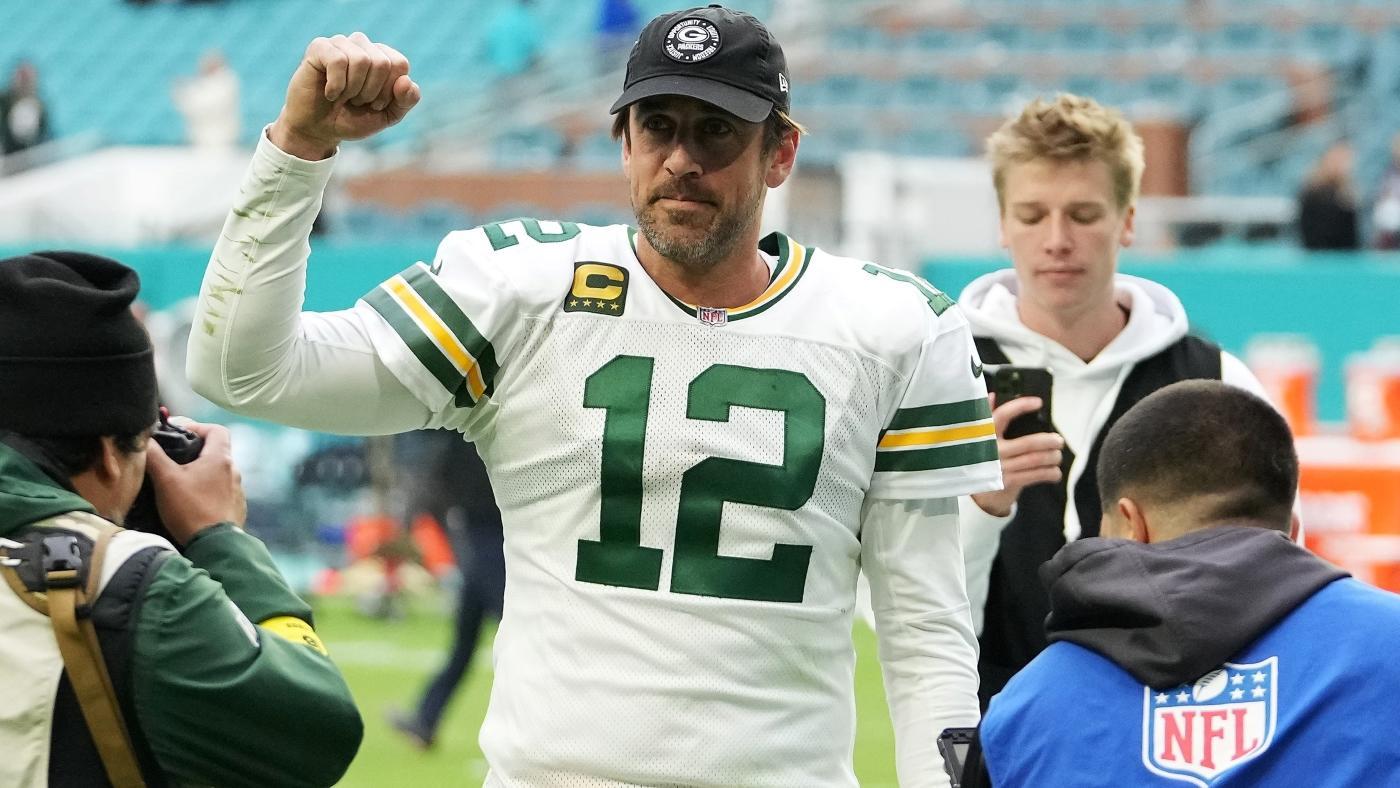 Happy Monday, everyone! I hope you had a wonderful weekend full of family, friends, good food and, of course, sports.Let’s get right to it.Good morning to everyone but especially to…THE GREEN BAY PACKERSDon’t look now, but here come the Packers. Green Bay picked up its third straight win — this one the best of the bunch — with a 26-20 victory over the Dolphins.The Green Bay defense wreaking havoc has been a big change: After forcing just 12 turnovers through their first 12 games, the Packers have forced eight during the three-game winning streak. They also have been much better against the run and are sacking opponents at a much higher rate.Thanks to the defense forcing turnovers, the Packers’ offense is scoring 26 points per game over the past three compared to 18.8 previously.

In the big picture, this weekend could not have gone much better for the Packers. Looking at the other teams in the race for the final two NFC Wild Card spots…That means the Packers are just a half-game behind the 7-seed Commanders in an increasingly tight NFC playoff picture, and while Green Bay still needs help, Aaron Rodgers and Co. are playing the best football of any NFC team chasing a playoff spot. It’s coming at a very good time.Honorable mentionsAnd not such a good morning for…
Getty Images
TUA TAGOVAILOA AND THE MIAMI DOLPHINSFor much of this season, we were wondering, “What’s gotten into Tua Tagovailoa and the Dolphins?” … in a good way.

A major issue is the quick passing game. Over the first 12 games, Tagovailoa diced up opposing defenses on throws released in 2.5 seconds or less with a 71 percent completion percentage, eight touchdowns and no interceptions. Since? A 57 percent completion percentage, three touchdowns and two interceptions.But enough on Tagovailoa, because it’s not all on him. The Dolphins have fallen to the 7 seed in the AFC. If they lose to the Patriots next week, they’ll fall out of the playoff field with one week left.It’s a sudden, shocking fall for a team we once considered a Super Bowl contender. If the Dolphins don’t find answers soon, they won’t even make the playoffs.

Not so honorable mentionsThe Football Five 🏈
Getty Images
Ryan Succop nailed a walk-off 40-yard field goal to give the Buccaneers a 19-16 win over the Cardinals. Tom Brady struggled much of the night but threw a fourth-quarter touchdown pass to Rachaad White to start the comeback.The Cowboys forced four turnovers and got huge days from Dak Prescott (347 passing yards, three touchdowns) and CeeDee Lamb (10 catches, 120 yards, two touchdowns) in a 40-34 win over the Jalen Hurts-less Eagles.The Patriots found another wild way to lose, and Rhamondre Stevenson was at the center of it again. One week after playing a part in the lateral debacle against the Raiders, Stevenson had a red-zone fumble as New England’s rally came up short, 22-18, against the Bengals. It was the first 22-18 score in NFL history. The Bengals lost La’el Collins for the season, though, and their flight home was plenty eventful.Greg Joseph nailed a walk-off 61-yard field goal and the Vikings won another one-score game, 24-21, over the Giants. That’s an NFL-record 11 one-score wins this season, and the Vikings can make some noise this postseason, writes Jeff Kerr.Russell Wilson threw three interceptions — including two within his first three passes — and took six sacks as the Rams destroyed the Broncos, 51-14. It’s yet another lump of coal in what’s been a disastrous season in Denver. Baker Mayfield won Nickelodeon Valuable Player.NBA on Christmas recap: Celtics win battle of top two teams in East 🏀
Getty Images
Giannis Antetokounmpo is a two-time MVP, former Defensive Player of the Year and maybe — just maybe — the best player in the world.Jayson Tatum does not care.Tatum scored 41 points — including two on a must-see monster dunk over Antetokounmpo — as the Celtics beat the Bucks, 139-118, in a battle of the top two teams in the Eastern Conference. He was one of the true standouts on a star-studded Christmas Day in the NBA, writes Brad Botkin.Botkin: “When there’s a primetime matchup, you can pretty much count on Tatum going off these days… Tatum was lethal from all three levels on Sunday, hitting 3-of-7 from deep, 3-of-4 from the midrange and 8-of-11 in the paint. He went 10-for-10 from the free-throw line, where he’s posting a career high 8.5 attempts per game this season.”Elsewhere across The Association…Joel Embiid and James Harden led the way in the 76ers’ comeback 119-112 win over the Knicks. Shake Milton’s amazing 50-foot heave certainly didn’t hurt, either.Luka Doncic nearly had a triple-double, and the Mavericks beat the Lakers, 124-115.Jordan Poole and Klay Thompson helped get the Warriors back on track with a 123-109 win over the Grizzlies.The Nuggets won an overtime thriller over the Suns and Devin Booker left the game with a groin injury.Carlos Correa saga continues: Mets have issues with medicals ⚾Not all holiday surprises are created equal, and the Mets got theirs on Christmas Eve: They have issues with Carlos Correa’s physical. But perhaps we — and they — shouldn’t have been surprised.

Correa agreed to a 13-year, $350-million deal with the Giants in mid-December, but the Giants’ delayed his official introduction due to their own issues with his physical.The Mets swooped in and agreed to a 12-year, $315-million contract with him. We thought that was that. We were wrong.The issue concerns Correa’s right lower leg, which he had surgically repaired in 2014 as a 19-year-old minor-leaguer in the Astros’ system.Correa has dealt with other injuries, but this particular one hadn’t been an issue in Correa’s previous stops with Houston and Minnesota. Of course, as Dayn Perry writes, “Correa before this offseason had never before agreed to contracts of such length.”As with the Giants, the Mets have some different options — restructure, renegotiate, back out of the deal, etc. — though it may not be super straightforward for either party: Mets owner Steve Cohen has gone on record talking about Correa even though the deal wasn’t formally signed, and Correa now has a medical issue two teams have flagged. Plus, Correa’s agent, Scott Boras, notoriously isn’t a fan of renegotiating.Long story short, this saga — which has already gone on far longer than anyone expected — could still have a long way to go.What we’re watching Monday 📺🏀 Nets at Cavaliers, 7 p.m. on NBA TV🏈 Chargers at Colts, 8:15 p.m. on ESPN🏀 Hornets at Trail Blazers, 10 p.m. on NBA TV