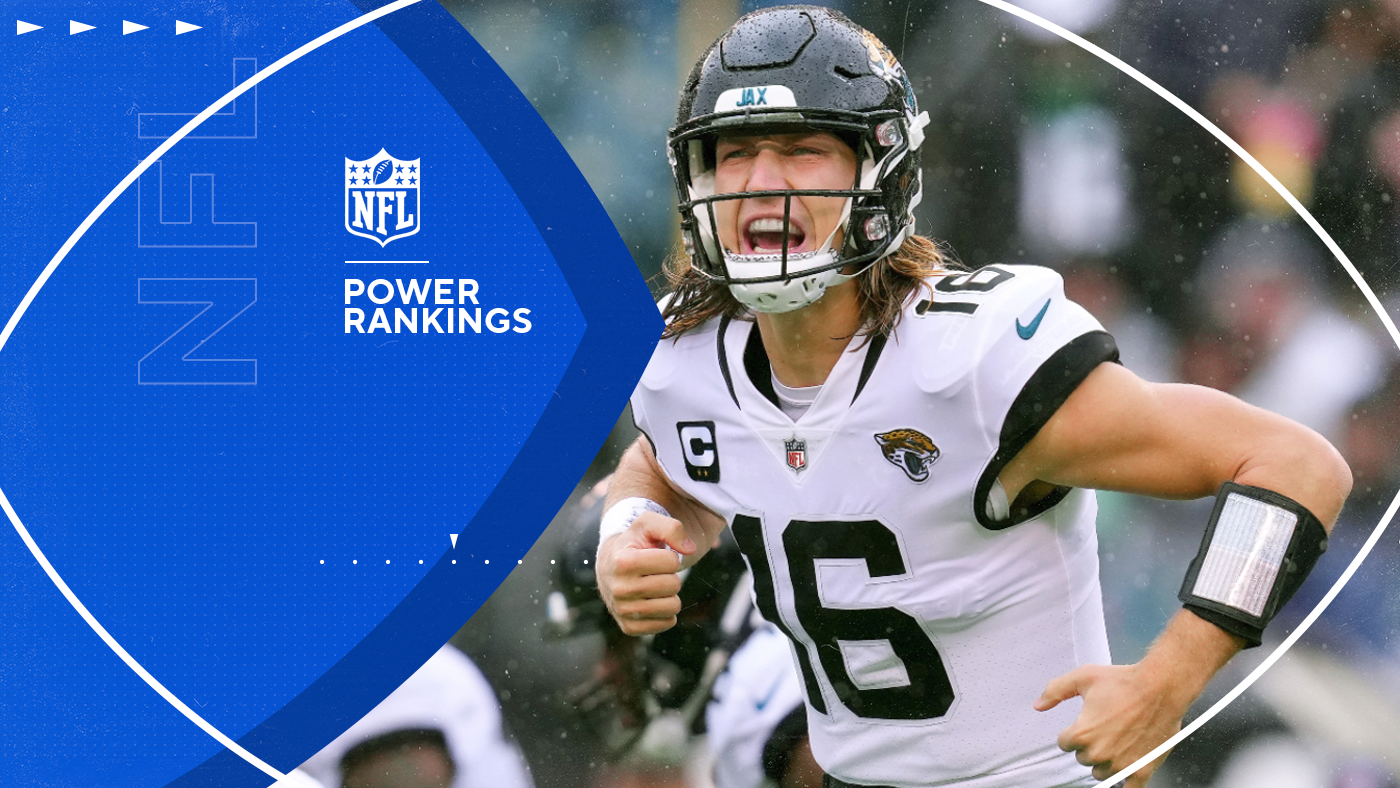 Did you ever eat something that was so bad it made your stomach churn, and all you could do is wait to eliminate it from your system?Now you know how Trevor Lawrence felt all of last season playing for Urban Meyer — a sick, nasty feeling in his stomach that wasn’t fixable until the rot was gone. Now, thanks to coach Doug Pederson, that feeling has gone away for Lawrence, and the results are a quarterback on the verge of being top five at his position next year.Lawrence has been almost flawless since the beginning of November and has the Jaguars on the verge of doing something nobody saw coming, which is to be a division champion in his second season. Lawrence didn’t do a lot in the rain against the New York Jets last Thursday, but he didn’t have to because the defense shut down the Jets offense in a 16-3 victory. What he did do was take care of the ball after a fumble on his opening possession and use his legs and timely throwing to beat a good Jets defense.The Jaguars are now one victory away from being the AFC South champions. All they have to do is beat the Titans in the season finale to win the division. Pederson and Lawrence are the reasons that can happen.

The defense played well against the Jets, but it still has issues. The offense, thanks to Lawerence and a talented group of receivers, plus running back Travis Etienne, has the dynamic to score a lot of points. It’s hard to believe this is the same team we saw go winless in October. But that’s what coaching and quarterback play can do to a team.A year ago, Lawrence came in as the so-called savior of a moribund franchise, the passer who would give it sustainable success. But instead of flashing future All-Pro potential, he languished under Meyer, who had no idea how to coach professional men and not college rah-rah players.

Meyer’s sophomoric ways led to a tumultuous season, one that included the organization parading out their rookie quarterback for press conferences after games to explain the mess. He was the face, even if he wasn’t truly ready for it, yet he handled it with ease, a tip that he understood all the trappings that come with playing the position.That’s the kind of season that can derail a player. But Lawrence went to work this year with a real coaching to staff to put it behind him, which he has done. Sure, there was a lull in October that led some to foolishly question if he was the franchise-saving type of quarterback, but that was misguided then and it truly is now.

Lawrence can be the small-market quarterback for Jacksonville like what Patrick Mahomes is to Kansas City, what Josh Allen is to Buffalo and what Joe Burrow is to Cincinnati. Those passers give their teams sustainable success, not just aberrational playoff seasons where the ball bounces your way all year. They are contenders as long as the quarterbacks are healthy.

That’s what Lawrence means to the Jacksonville organization. The Jaguars will be relevant for the next decade.That in itself is amazing. Relevance and Jaguars are not two words that often get said together. The organization has been a national laughingstock since coming into the league. The Jaguars had some early success, but even then it wasn’t with a home-grown drafted quarterback. They traded for Mark Brunell. They failed drafting others like Byron Leftwich, Blaine Gabbert and Blake Bortles in the first round. Lawrence is the first truly home-grown player at the position who can change the trajectory of the franchise. One victory over the Titans puts them in the postseason. That’s unreal, considering where they were six weeks ago.

The Jaguars are up to No. 13 in my Power Rankings this week. They play Houston this week and then home against the Titans next week. Even if they don’t get into the playoffs this year, get used to them being in the mix for a long time. Like Mahomes, Allen and Burrow, Lawrence will do that for them.The cleanse of Meyer’s residue was all it took. Trevor Lawrence is on his way to being a star.
Biggest Movers
RkTeams

Gardner Minshew made some good plays in place of Jalen Hurts, but he also made some big mistakes. He is a backup for a reason.

They continue to play well as they push for the top seed, but the game at Cincinnati Monday won’t be easy. They can’t afford to lose that if they want the playoffs to go through Buffalo.

They didn’t quite light up the scoreboard against Seattle, but the good news is the defense played well. That’s progress.

They continue to surge at the right time, but they made it interesting at New England. That game should never have been that close. Now here come the Bills.

They are winning games and could end up as the second seed if the Vikings stumble. Brock Purdy continues to play well.

At 12-3, they are pushing to be the second seed. But if the Eagles were to stumble twice, they could end up with the top seed if they won out.

They found a way against the Jalen Hurts-less Eagles, but it wasn’t always pretty for the defense. That unit has to be better.

The defense has to carry this team right now, which they are doing. They can’t get Lamar Jackson back soon enough.

They are going to the playoffs, where they will be a tough out with Justin Herbert as their quarterback.

They have to be concerned with the way Tua Tagovailoa is playing. The fourth quarter against the Packers was a disaster.

That was a tough loss to the Vikings, but they showed well — especially the offense. They need to win one more to get into the playoffs.

Taylor Heinicke didn’t play well against the 49ers, which could mean it’s time to go back to Carson Wentz. They are still a playoff team right now.

All they have to do is beat or tie the Titans in Week 18 and they win the division. This week’s game with the Texans means nothing.

They have fallen on hard times, and the playoffs are slipping away. The offense let them down against the Chiefs.

They didn’t look good in beating the Cardinals, but have they looked good at any time this season? They win the division by beating the Panthers on Sunday.

They have Mike White back this week at Seattle, which is a good thing. The Zach Wilson situation might be coming to an end.

Losing to the Panthers really dampens their playoff chances. The run defense really let them down at a bad time.

They are back in the playoff race. If they win the next two, they might get in. That would be a heck of a resurrection.

They kept their slim playoff hopes alive by rallying to beat the Raiders. That was a big-time drive by Kenny Pickett to win it.

They ran their way to a much-needed victory over the Lions. If they win the next two, they will be a playoff team.

Derek Carr had an awful night against the Steelers, which begs the question as to whether he is their long-term answer at quarterback. They can walk away from him easily after the season.

Their playoff hopes were hurt in a big way with the loss to the Bengals. They did show fight to come back in that game, but two brutal losses the past two weeks are hard to overcome.

By winning at Cleveland in the bad conditions, they aren’t dead yet. It’s win the last two and then see what happens.

They just aren’t scoring points with Deshaun Watson, although the weather impacted the offense against the Saints. He has to pick it up.

They are done after losing to the Ravens. It’s all about Desmond Ridder and his growth the next two weeks.

They showed some fight in losing to the Bucs, especially on defense. But down to a third-string quarterback, they are too limited on offense.

Does it matter who plays quarterback? They just aren’t good enough on offense. They need a quarterback in the worst way.

Baker Mayfield has done a nice job with his new team. The Rams might want him to stick around in case Matt Stafford gets hurt next year.

They showed against the Bills how far they have to go to get to that level. That’s what happens with young teams against teams that good.

They have showed some fight the past three weeks and clearly have made major strides, even upsetting the Titans on the road. Lovie Smith has done a nice job the past month.

This thing has gone way off the rails, which is why coach Nathaniel Hackett was fired. They are awful. What’s worse, they are stuck with Russell Wilson.