NFL Week 16 weather update: A complete guide to how games will be affected by winter storm on Christmas Eve 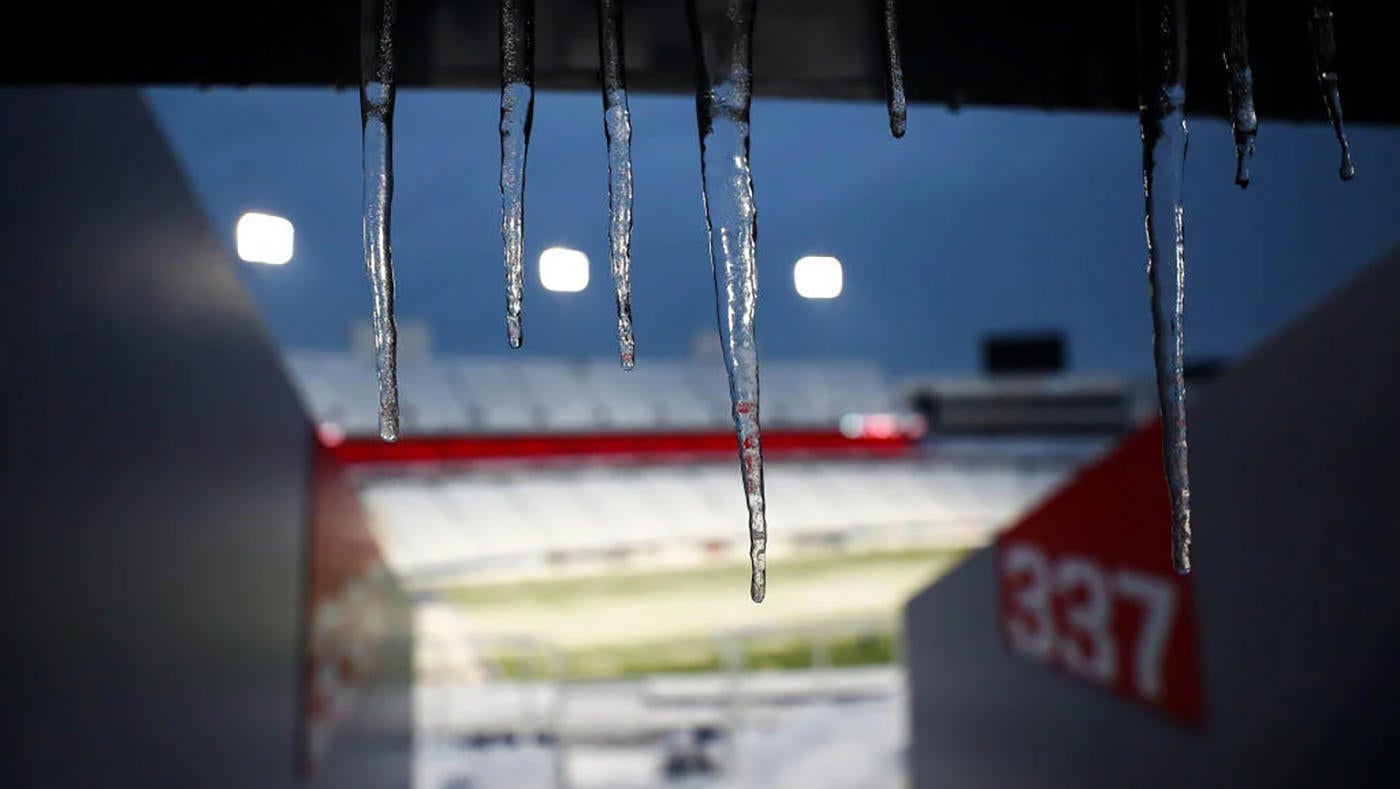 Severe winter weather sweeping the country this week won’t just have a big impact on your holiday travel plans, but possibly all of your NFL rooting interests.Saturday could be the most impactful NFL weather day on record. With playoff lives, fantasy championships and more, at stake, we’ve got you covered on the potential fallout on the impacted games. Let’s just say, anytime you hear the phrases “bomb cyclone” and “polar vortex”, it’s probably a good idea to check your fantasy lineup again, for starters.Eight games on Saturday are currently scheduled for below freezing kickoff temperatures, which would be an NFL record for a single day. All eight are also forecasted to have 10-plus mile per hour winds.How could this impact the overall NFL landscape?Cold weather has little impact on league scoring. Since 2000, league-wide scoring drops less than two points per game in freezing temperatures, while passing and rushing numbers don’t move significantly.PPG42.444.2Pass yards per game412446Rush yards per game245228Wind has more of an impact on offensive production, especially if it hits 15-plus miles per hour. In those games, you lose about a touchdown compared with indoor games, and four points from an average game. Saints-Browns, Bills-Bears, Bengals-Patriots, Falcons-Ravens and Raiders-Steelers are currently the games in that territory.PPG46.944.342.140.5Pass yards per game472448423397Rush yards per game226227230240The impact of both cold weather combined with wind can be truly detrimental to an offense. Forty-four games since 2000 have featured freezing temperatures and 15-plus mile per hour winds. Those games averaged 37.9 points per game. To put that into perspective, of the 32 teams, only the Broncos see a lower combined scoring average in their games this year.Average game44.2Freezing temperatures42.415+ MPH winds40.5Freezing temps & 15+ MPH winds37.9Our experts, Chris Towers (fantasy), R.J. White (betting), and myself (facts/playoff stakes), dive into each cold game and the impacts across the board. All forecasts provided by AccuWeather.8 degrees, RealFeel of -2228 mph wind, gusts up to 46 mphCloudy, a snow shower; very cold, blowing and drifting snowFact to KnowThis could be the first game with 25-plus mile per hour winds since the Patriots-Bills 14-10 slugfest in Buffalo last year where the Patriots attempted just three passes. The current Over/Under point total of 31.5 is the lowest in a game since 2008 (Browns/Bengals). Playoff StakesBoth teams are still alive in the playoff hunt, but have under 5 percent chances to reach the postseason, per SportsLine projections. You’d think the weather would impact the Saints more, as they leave the friendly confines of the Superdome, but it will be easily the coldest game of Deshaun Watson’s career, ahead of last week’s game against the Ravens (32 degrees).Fantasy ImpactThe concern here is definitely more around the wind forecasts. Snow tends to have a slightly negative impact on passing production (and a slightly positive impact on rushing production), but wind is the much bigger concern. Teams are more likely to go run-heavy in cold, windy environments, and these are two teams that already want to limit possessions and run the ball. If the forecast holds, I wouldn’t be surprised to see neither QB attempt 30 passes. If Nick Chubb (foot) is out, this could make Kareem Hunt a potential top-10 RB. Betting ImpactThe total is an automatic Under play even in the low 30s if forecast holds. Cleveland team total Under 16.5 is a good look as well with Chubb managing an injury. The Saints could be in a better position to take advantage of weather than run-heavy Browns as they can lean heavily into the Taysom Hill package. Unders likely for all passing/receiving props.12 degrees, RealFeel of -1423 mph wind, gusts up to 33 mphCloudy with blowing and drifting snowWinter Storm Watch in effect through late Friday nightFact to KnowPlayoff StakesBrutal winter weather is nothing new to the Bills, who can clinch a third straight AFC East title with a win OR Dolphins loss this week.Fantasy ImpactWe saw the Bills play in snowy conditions a bit last week, and between the weather and the opponent, I wouldn’t be surprised to see a more run-heavy approach from them. That’s in keeping with recent trends for them anyway, as Allen has attempted 34 or fewer passes in five of his past eight games. The key question will be whether the Bears can score enough to force the Bills to have to pass. This could be a game where James Cook sees a dozen or so carries, making him a viable sleeper with a good matchup. Betting ImpactTotals in Bears games are usually high with the state of their defense and Justin Fields able to lead the offense to points consistently. The total here tells you the weather matters for the Bills’ passing attack, and that should give the Bears a great chance at covering as underdogs of more than a TD at home just like they did against Philadelphia last week. QB rushing props will be key and likely to be Over plays on both sides.20 degrees, RealFeel of 1012 mph wind, gusts up to 20 mph Partly sunny and breezyFact to KnowPlayoff StakesThe Titans are protecting a one-game lead over the Jaguars in the AFC South, but won’t have Ryan Tannehill, who played one of his best games of the season in freezing temperatures at Lambeau Field last month. Tennessee can still lean on Derrick Henry, who has four straight 200-yard rushing games against the Texans, including his last one with Malik Willis starting.Fantasy ImpactHere’s another one where the team’s tendencies align with how this kind of weather tends to impact football games. The Titans, obviously, want to run the ball a ton, and that’ll be especially true if Willis has to start in place of an injured Tannehill. The Texans are less inclined to run the ball, especially without Dameon Pierce, but seeing as how the Titans managed just 17 points in both of Willis’ previous two starts, it’s unlikely they’re going to need to throw much. Betting Impact

Kenny Pickett is used to playing in the cold from his time in college, but Derek Carr’s struggles in the cold are relatively well-documented. He has played six games with a temperature below 37 degrees at kickoff, and he has just one touchdown in each, with only two games over 222 yards. The Steelers have allowed more than 200 passing yards just twice in T.J. Watt’s seven games, too, so this could be a tough one for Carr and the Raiders passing game. Betting ImpactCarr’s awful numbers in freezing temperatures are not a good indicator for the Raiders offense when the Steelers have shut down the run in their past two games. The Steelers want to be a run-focused offense, and Pickett shouldn’t have to do a ton with the Raiders struggling to defend the run last week. This line moved to Steelers -3 with the news of Pickett’s return, and even though their offense is a bit limited, they are in a great spot to win this game.