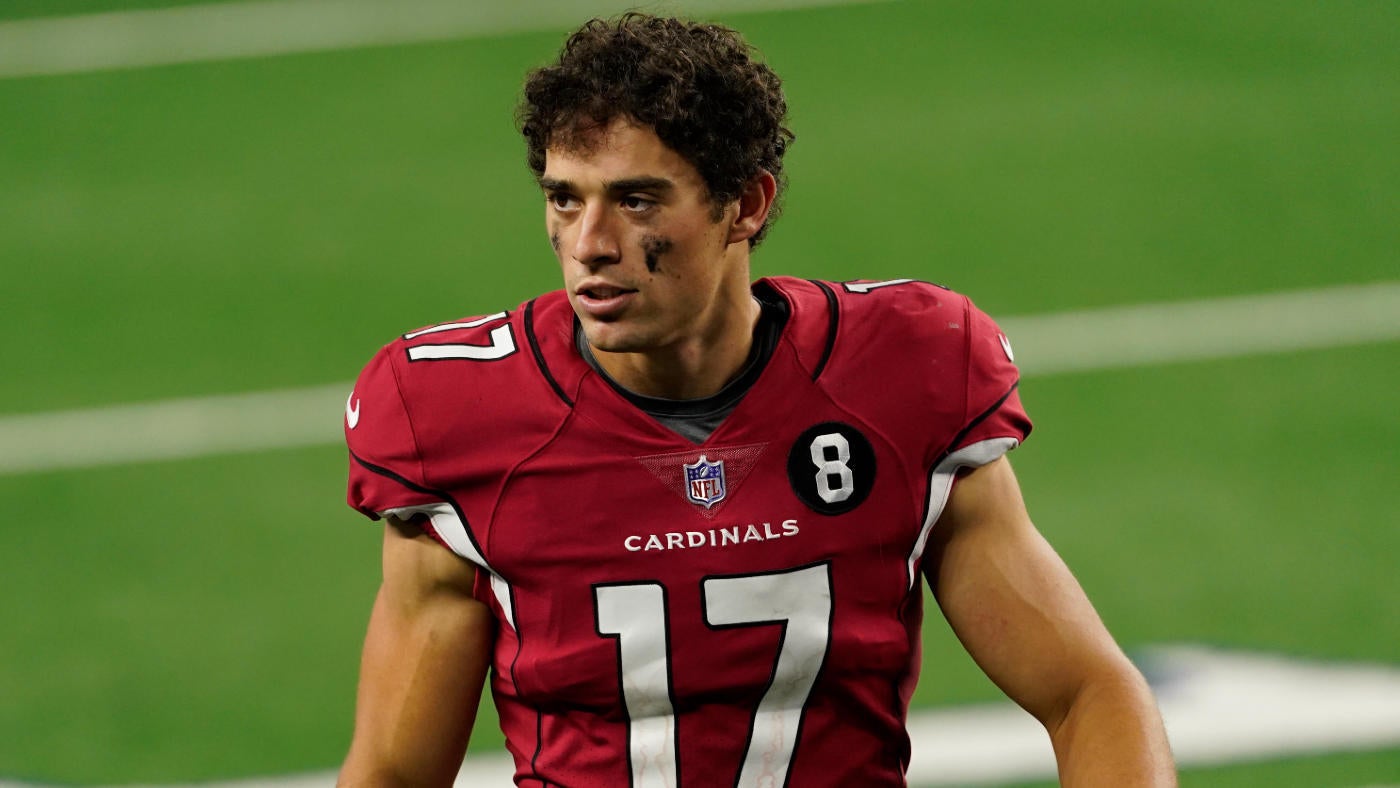 The Ravens desperately need a last-minute Christmas gift. At 9-5, Baltimore has witnessed the Bengals overtake the AFC North lead with three games to play in the regular season. As per usual, John Harbaugh’s club has navigated through a long list of injuries, most notably to quarterback Lamar Jackson, who’s missed the past two-plus contests and won’t play in Week 16 against the Falcons. Tyler Huntley has held his own but a similar theme has unsurprisingly arose during his relief appearances — the Ravens receiver group is simply not up to today’s raised standards. And it’s not close. As if Baltimore needed more bad news on the injury front — they don’t — Devin Duvernay was placed on IR after injuring his foot in practice earlier this week. Unreal. Of course, the Ravens are a smashmouth running team with an elite tight end in Mark Andrews, but a wideout contingent consisting of Demarcus Robinson, DeSean Jackson, James Proche and recently claimed-on-waivers Sammy Watkins isn’t encouraging entering the stretch run of the regular season, or, heck, even for Week 16 against Atlanta, regardless of who’s playing quarterback for Baltimore — of course Huntley isn’t 100% healthy either. Figures.

This is precisely where Andy Isabella comes in. A former second-round pick with low 4.3 speed, Isabella never materialized as a fixture or even a reliable niche option in Arizona after an 88-yard touchdown on Halloween of his rookie season in 2019. He’s been with the Ravens since Oct. 10, so it’s not as if he’s unfamiliar with the scheme. It appears the Ravens feel the same way, because they did indeed elevate Isabella for Saturday’s game.Isabella was incredibly productive in college, has quicks, and even if he’s not ready to see 10 targets in a game, his blistering speed makes him a candidate to hit a big play or two against one of the league’s most susceptible secondaries in Week 16. The Ravens enter this contest with the fifth-fewest offensive plays of 20 or more yards (43), and only the Giants have fewer 20-plus yard pass plays (21) than Baltimore’s 27.

The CUT (call-up tracker) is steadily humming along. One elevation in Week 15 was Cole Beasley, who again received the call for Week 16’s game against the Bears. For all of you keeping score at home, that makes for 26 call-ups heading into Christmas. Big number. Love it. Oh, and by the way, we’re going with a full-scale “anyone-is-fair-game-regardless-of-NFL-experience” theme at The PSPR for the rest of the regular season. Teams are taking advantage of the new, loosened practice-squad rules as they pertain to veterans. We are exercising the right to feature them, too. Boom roasted.Remember faithful PSPR patrons, don’t be shy to hit me up on Twitter @ChrisTrapasso to alert me about any PSPR members getting the glorious call this weekend.

The expanded, 16-man practice squads are about the only good thing to come out of the pandemic, and they’re here to stay in the NFL. Because of this, I run the Practice Squad Power Rankings parallel to the league. I write about 16 individuals every Friday, 10 officially in the rankings and six honorable mentions. Here’s to the Practice Squad Power Rankings flourishing this season and starting to cement its legacy in the hallowed halls of the internet’s football-media industry.No Boogie Basham for the Bills against the Bears in Week 16. It’ll probably be Mike Love, the longest-tenured edge rusher on Buffalo’s practice squad, who gets the call, but I’d love if Buffalo went against the grain with the younger Jonathan in this scenario. Jonathan has around-the-corner juice. He made that clear in the preseason with five pressures on 39 pass-rushing snaps.

Hand was called up in Week 13 for Chicago, and given the dire state of the secondary — much of which is because of injury — it’d be smart for Hand to be elevated again. He’s a young, springy cornerback who could have a future as a depth cornerback in Chicago in 2023 and beyond. More action will allow the coaching staff ample opportunity to evaluate him.The Bengals will be without Sam Hubbard for Week 16’s tilt with the Patriots. Johnson is a unique edge defender at just over 6-foot-2 and 260 pounds. At Georgia Southern, he was a no-nonsense, hyper-active rusher who was plenty productive. New England’s offense isn’t very dynamic, but Mac Jones is much better when kept clean than when he’s pressured. Roberson’s juice was sapped by a devastating knee injury in his second-to-last season at SMU, yet I will never, ever forget how explosive Roberson was before he went down in 2020. The Titans are absolutely reeling at receiver, and they clearly have no interest in elevating former fourth-round pick Dez Fitzpatrick at the position. Give Roberson an opportunity. There’s still some burst and cutting skill to his game.

The Texans were seconds away from the biggest win of their otherwise disastrous 2022 campaign in Week 14 against the Cowboys, and now the Chiefs come to town. YIKES. There’ll be no Nico Collins, Brandin Cooks, or Dameon Pierce for Houston. DOUBLE YIKES. Doaks isn’t as talented as Pierce — obviously — but is a similar runner stylistically. He’s built low to the ground and has deceptive quickness for a power back. David Bakhtiari and Elgton Jenkins were both on the injury report for Green Bay earlier this week, and if either can’t go for Week 16’s matchup with a Dolphins club with a sturdy defensive front. Delance is incredibly long with close to 37-inch — yes 37-inch arms — and he was a twitched up bulldozer while blocking at Florida. Harris hasn’t been able to rekindle the magic of his 2019 campaign, however, playing behind the Eagles’ studly defensive front could directly lead to him tapping into his previous opportunistic ways. Plus, having two veteran corners on either side of him — Darius Slay and James Bradberry — will allow Harris to play more freely.

Clearly the Bills want to take it somewhat slowly with Beasley, who had just one catch and was barely on the field for Buffalo in Week 15’s classic against the Dolphins. Beasley won’t be running routes in the exact same offense or under the exact same offensive coordinator during his first stay with the Bills, current OC Ken Dorsey joined Buffalo’s organization in 2019, the same year Beasley did. The Giants got past the Commanders a week ago, meaning their very much in playoff contention. But they’re banged up at guard, with Shane Lemieux still on the injury report and rookie Joshua Ezeudu out for the foreseeable future. Kindley has started games in the NFL and packs a powerful punch at the point of attack. Isabella was a scintillatingly fast, do-everything wideout at UMass, went in the second round, and never popped in Arizona. He’s not solely a gadget-type either. The Ravens have to do everything possible to maintain some semblance of electricity in their passing attack in these last three regular-season contests. Isabella being elevated to bring some downfield juice to Baltimore’s offense is a smart move.

Honorable Mention Tevin Coleman, RB, 49ersColeman feels like that late-season call-up who could turn in a quality performance for Kyle Shanahan. In his prime, Coleman was best as a one-cut run, and that’s all he’d need to be in San Francisco’s zone-blocking scheme. Tyler Goodson, RB, PackersWhen the Packers are running it well, they’re very difficult to stop. To keep Aaron Jones and A.J. Dillon — the latter of whom hasn’t been overly effective this season — fresh, call-up Goodson, who was born to run in Mike LaFleur’s outside zone system and has serious juice. He ran 4.42 at the combine. Prince Emili, DT, Saints Earlier this season, while with the Bills, Emili had a key tipped pass that led to a Jordan Poyer interception in Buffalo’s huge comeback win over the Ravens. The Penn grad is a twitchy up-the-field, no-hesitation rusher — the exact type of player New Orleans could use on its defense right now.

Matt Hankins, CB, FalconsHankins didn’t test through the roof at the Iowa Pro Day. Far from it. But this is your classic Hawkeyes secondary member. Super instinctive, well-coached in college, and despite his lacking athleticism, always around the football. In his final three seasons at Iowa — six interceptions and 21 pass breakups. It’s time Hankins gets an opportunity in Atlanta. Jaquarii Roberson, WR, Rams The Rams are essentially fielding a practice squad on offense right now — plus Baker Mayfield! — so why not see what you have for the future in Roberson? It’s that’s time. And, no, he’s not related to Reggie above. Fun coincidence, though. Roberson was a productive weapon at Wake Forest the past two seasons with 133 catches and over 2,000 yards. Deven Thompkins, WR, BuccaneersThompkins had five catches for 53 yards — including two contested-catch wins! — during the 2022 preseason. He’s also a Brady-type, too, in that he was a 0-star recruit when he joined the Utah State program in 2018. Brady loves an underdog’s underdog, and that’s precisely what Thompkins is. Lastly, Tampa Bay could use more juice at receiver, especially given how pedestrian the offense has been. He has 4.44 speed, had a 38.5-inch vertical and a 132-inch broad jump at his pro day.