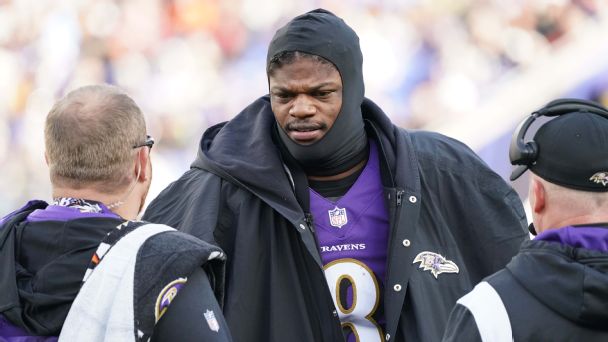 6:41 PM ETNFL NationESPN The races for the last remaining NFL playoff spots are heating up and a few contenders are facing big injury questions.1 RelatedThe Philadelphia Eagles will be without quarterback Jalen Hurts on Saturday for their NFC East showdown with the Dallas Cowboys. Hurts is dealing with a right shoulder sprain, which he suffered in last week’s win over the Chicago Bears.”Jalen did everything he possibly could to get his body ready to go,” coach Nick Sirianni said Thursday. “And at the end of the day, he’s not going to be able to do it. He tried like crazy. And I know he still wants to go. Jalen Hurts is the toughest player I’ve ever been around.”Gardner Minshew will start in his place in a game that could give the Eagles the NFC East title and the No. 1 overall seed in the NFC with a win.The Baltimore Ravens will go again without quarterback Lamar Jackson, who is sidelined for a third straight week with a knee injury.Instead, Tyler Huntley will start Christmas Eve against the Atlanta Falcons. Baltimore’s offense could use Jackson. In a 13-3 loss to the Cleveland Browns, Baltimore scored its fewest points in a regular-season game in 14 years and failed to get a touchdown for the first time since 2018.Quick links:Schedule | Depth charts | PickCenterInjury: KneeJackson has been ruled out for a third straight game, which means another start for Tyler Huntley. The Ravens have struggled with Huntley, scoring two touchdowns in three games with him. Over the past three weeks, Huntley and Mike White are the only quarterbacks with over 70 pass attempts and no touchdown passes. But Huntley is facing an Atlanta defense that ranks 28th against the pass.– Jamison HensleyInjury: CalfOliver popped up on the injury report Wednesday with a calf injury, and while he was limited in practice that day, he did not participate at all Thursday and is listed as questionable for the game vs. the Bears. If he can’t play, that would be a significant loss for the Bills’ defensive line as they prepare to face the NFL’s top rushing offense (186.9 yards per game) and could be down multiple players. Defensive end Boogie Basham (calf) has already been ruled out and defensive tackle Jordan Phillips (shoulder) is questionable.– Alaina GetzenbergInjury: AnkleDonald will not play Sunday against the Broncos and is unlikely to play again this season, coach Sean McVay said Friday. Donald hasn’t played since sustaining a high ankle sprain in Week 12 against the Chiefs.– Sarah BarshopInjury: ConcussionBurks missed the past two games because of a concussion he suffered when he took a vicious hit from Eagles safety Marcus Epps. Although he caught the pass for a touchdown, he didn’t return to the game and missed the next two weeks of practice. Burks returned to practice this week and was a full participant. But he has not cleared the concussion protocol yet. Titans coach Mike Vrabel said he’s hopeful Burks will be cleared to play against the Texans.– Turron DavenportInjury: Right shoulderHurts has been ruled out for Saturday against the Cowboys, so it will be Gardner Minshew under center. Coach Nick Sirianni would not entertain the question of whether Hurts will miss next week’s game against the Saints as well, saying the Eagles are taking it day by day. The Eagles are without their MVP candidate but are getting tight end Dallas Goedert back from a shoulder injury this week.– Tim McManusInjury: AnkleStevenson is officially listed as questionable, and has been limited in practice, but all indications are that he is likely to be playing. Stevenson held his weekly media availability with reporters and said of the Patriots’ approach coming off a heartbreaking loss to the Raiders: “We put that game behind us and we’re on to a new week. It’s a huge week. All these games mean that much more.”– Mike Reiss