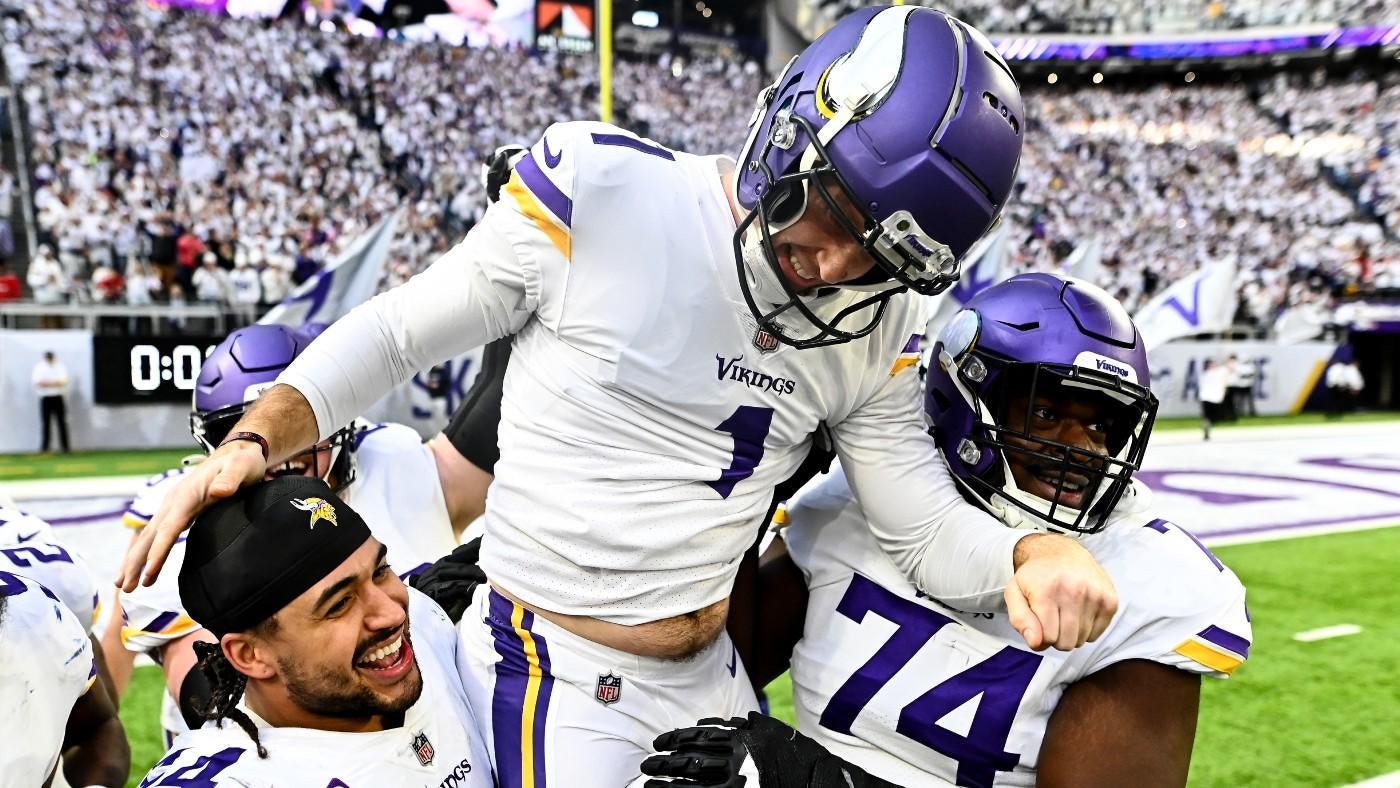 It’s Week 16 of the 2022 NFL season, and we’re keeping you updated on all the action and biggest storylines throughout the day. This week’s slate has some fantastic matchups and storylines, with most of the games Saturday and three games Christmas Day, and we’re here to help you watch it unfold. Check back often to find out everything you need to know.Week 16 scheduleThursdayJaguars 19, Jets 3 (Takeaways)SaturdayBengals 22, Patriots 18 (Recap)Vikings 27, Giants 24 (Takeaways)Ravens 17, Falcons 9 (Recap)Bills 35, Bears 13 (Recap)Panthers 37, Lions 23 (Recap)Texans 19, Titans 14 (Recap)Saints 17, Browns 10 (Recap)Chiefs 24, Seahawks 10 (Takeaways)Commanders at 49ers (Gametracker)Eagles at Cowboys (Gametracker)Raiders at Steelers, 8:15 p.m. ET (Preview)Sunday Packers at Dolphins, 1 p.m. ET (Preview)Broncos at Rams, 4:30 p.m. ET (Preview)Buccaneers at Cardinals, 8:20 p.m. ET (Preview)MondayChargers at Colts, 8:15 p.m. ET (Preview)Texans win!For the first time since Week 5, the Texans won a game! They should have beaten the Cowboys and nearly beat the Chiefs, but they got it done Sunday against backup rookie quarterback Malik Willis. Here were some of the top moments from the 19-14 triumph (and don’t worry, Houston fans: you still have the No. 1 pick in the 2023 NFL Draft).

Bengals surviveThe Bengals were up, 12-0, fewer than 10 minutes into the game. That lead swelled to 22-0 before halftime. Then Cincinnati couldn’t do anything, and the Patriots, thanks to multiple how-did-that-happen touchdowns, were inside the 10-yard line with a chance to go ahead with a minute left. But with the game on the line, a dominant second-half Bengals defense delivered again, stripping Rhamondre Stevenson to all but clinch the team’s seventh straight win.
11-0The Minnesota Vikings don’t lose close games. They just don’t. If it’s within one possession, just mark it as a win because Kevin O’Connell’s team has won 11 of those this season without a loss. Sunday’s victory was particularly exciting, as Greg Joseph set the Vikings’ franchise record with a game-winning, 61-yard field goal as the clock struck zero. It marked his second straight game-winning field goal, both of which were at least 40 yards.
All tied up!Aside from an interception from Patrick Paterson, Daniel Jones carved up the Vikings defense Sunday to the tune of 30 of 42 passing (71.4% completion) for 334 yards and one touchdown. But his biggest throw was on the two-point conversion, when he floated a pass to tight end Daniel Bellinger that a Vikings defender JUST missed getting his hands on.

Fourth down, TDAbsolutely no one was expecting the Giants to run the ball on fourth-and-2 with just over two minutes left to play; that’s why it was successful. Taking the hand-off up the middle, Saquon Barkley exploded through the crease and cut outside. Touchdown from 17 yards out.
Patriots miracle TD!On THIRD-AND-29 and down 10, Mac Jones just threw up a prayer. And a week after being on the wrong side of one of the NFL’s wildest plays ever, Jakobi Meyers caught the touchdown of the day off the tipped pass to pull New England even closer.
BLOCKED PUNTIn a game this close, special teams is sometimes the difference. Josh Metellus made the special teams play of the day for the Vikings on Sunday, blocking the punt that set up Justin Jefferson’s touchdown in the final minutes.

First-career TD!It’s pretty fitting that Malik Willis’ first career TD came on the ground. He flashed his physicality, speed and elusiveness (and ability to let his teammates help him) as an offensive lineman pulled him into the end zone to put the Titans back on top.
Mahomes & Kelce dominationThe Chiefs were letting the Seahawks hang around, so they turned to old reliable: Patrick Mahomes to Travis Kelce. First Mahomes found Kelce for 20 yards. Then a 52-yard pickup over the middle. Three plays later, Mahomes decided to do it himself, scrambling around until he found an angle to the pylon and diving for the touchdown.
Bourne to scoreThe pick-six began the 22-point comeback, and this Mac Jones touchdown to Kendrick Bourne has continued that pursuit, pulling the Patriots within 10 early in the fourth quarter. Bourne made two huge plays on the drive to give New England life.

Cousins -> Hockenson (x2)The T.J. Hockenson trade has turned out tremendous for the Vikings. The recently named Pro Bowler has played like it Sunday, catching two Kirk Cousins touchdowns to put Minnesota ahead. This catch was particularly pretty with his team in need of a big play on third down.
Pick-six!The Patriots have life! Rookie Marcus Jones, who has literally done it all in recent weeks, not only picked off a wobbler from Joe Burrow, but he then sped past everyone down the sideline, made one cut and then continued on his way to the end zone for the 69-yard touchdown.
Cooking!It must be refreshing for Bills fans that Josh Allen hasn’t had to do everything Saturday. The running backs have carried the load, with rookie James Cook joining Devin Singletary as members of the 25-plus-yard touchdown club.

The Panthers?!It’s a bloodbath in Carolina, but the Panthers are doing just fine. They’ve put up 31 points on the red-hot Lions in two and a half quarters — the latest of which came from D.J. Moore on a short pass from Sam Darnold. That was the encore of the duo’s 47-yard connection the play before.
Taysom ties it upThe Browns’ run defense is terrible. The Saints have Alvin Kamara and Taysom Hill. So good on New Orleans to limit Andy Dalton to 11 pass attempts midway through the third quarter. Just run the darn ball and good things will happen. Case and point: Hill’s game-tying touchdown scamper.
Shot out of a cannon! There goes Devin Singletary, shooting through the middle, making a defender look silly and then breaking outside as the Bears hopelessly pursued. Bills back on top.

Fumble score! The 1-12-1 Texans deserve some luck, right? After throwing a nice juke on a Titans defender, Davis Mills tried diving between two more defenders near the goal line. He failed miserably, with the ball popping out and into the end zone. Fortunately, Rex Burkhead was right there to recover for the unconventional touchdown.
If you haven’t heard, Derrick Henry LOVES playing the Texans. He has four straight games of more than 200 YARDS versus Houston, and he’s only his way to that milestone once again Sunday. Seriously, it looks like Henry is playing the JV team on this 38-yard rumble into the end zone.
Ravens in controlWhen your defense is playing as well as the Ravens’ is, you only have to connect on a few offensive plays to have a good chance at a victory. Tyler Huntley and Demarcus Robinson combined to make one of those crucial plays on this six-yard pitch and catch late in the first half.

200 yards!The Lions run defense hasn’t been great this season, but it hasn’t been close to as awful as its been in the first half Sunday. The Panthers have rushed for 240 yards IN THE FIRST HALF (10.9 yards per carry!) and scored three touchdowns on the ground — and Detroit is in a 21-7 hole because of it.

Chiefs’ X-factorIf the Chiefs win the Super Bowl this season, Jerick McKinnon will have surely played a big role. He’s been tremendous for Kansas City over the past month, catching a touchdown in his fourth straight game to put his team up two scores.
The coldest game of a historically cold NFL slate is probably going to be won on the ground, and Deshaun Watson put the Browns ahead in the second quarter by taking the snap, immediately taking off around the left end then high-stepping into the end zone to complete the 12-yard score.

By way of his 25-yard catch midway through the first quarter, Justin Jefferson officially rewrote the history books by breaking Randy Moss’ single-season receiving record. Moss, who amassed 1,632 yards in 2003, will now have to settle for second as Jefferson continues his historic campaign. He’s already got more than 1,650 yards this season — and there’s still two-plus games to play!
Hampered by a hamstring injury for most of the season, Kadarius Toney returned after a multi-game absence and immediately make his presence felt. On second-and-goal from the eight-yard line, Patrick Mahomes flipped it to Toney on the jet sweep and Toney did the rest, slicing through the defense and into the end zone.
Da Bears!The Bears did not look like a 3-11 team on their opening drive versus the Bills. Eight plays, 64 yards and this touchdown pass from Justin Fields to Dante Pettis to surprisingly put Chicago on top.

“We’re on to Cincinnati”That’s the classic Bill Belichick line, although he probably would have preferred not to play the red-hot Bengals in a must-win game. Thanks to Joe Burrow and Tee Higgins, Cincinnati began the game with a five-play, 78-yard drive that Higgins capped with the touchdown.
Chuba hubba!Great start to the Panthers thanks to Chuba Hubbard, who ripped off runs of 30 and 35 yards on the opening drive. That led to a goal-to-go situation, where Raheem Blackshear scampered into the end zone to put Carolina on top.
Playoff mainstays in troubleWhen you think of the NFL playoffs over the past 20 years, who comes to mind? For the AFC, it’s obviously Tom Brady, Bill Belichick and the New England Patriots. For the NFC, there’s Aaron Rodgers and the Green Bay Packers, who have qualified in 11 of the last 13 seasons.In fact, in the previous two decades, Brady, Belichick and Rodgers have missed the same postseason exactly once. That was in 2008, when New England failed to qualify despite finishing 11-5 and Green Bay trudged to a 6-10 record.With three weeks left in the 2022 campaign, there’s a chance it happens again.The Patriots, fresh off one of the most ridiculous ways to lose a game ever, are currently a game behind the Los Angeles Chargers and Miami Dolphins in the AFC wild card race. And their schedule does them absolutely no favors: home vs. Bengals, home vs. Dolphins, away vs. Bills.Crazy enough, the 7-7 Patriots have had a better season than both Brady and Rodgers. The Bucs, despite being 6-8, lead the putrid NFC South by a game and have a manageable schedule to close out the year. But if they’re not careful, either the Atlanta Falcons or Carolina Panthers could beat them and keep Brady out of the playoffs for the first time in 20 years.Then there’s the Packers, who looked completely dead a few weeks ago. Their odds are still slim, but at 6-8 and with a game against the surging Lions in Week 18, would anyone be surprised if the reigning back-to-back MVP snuck his way back into the postseason?Which brings us to this week. If these teams want to keep their playoff hopes alive, winning this weekend is almost a must. The Patriots are first up, going up against the aforementioned Bengals on Christmas Eve afternoon. Then we’ll get Rodgers and Brady with standalone games on Christmas, with the Packers taking on the Dolphins in the first matchup and the Buccaneers playing in Arizona in the nightcap.Will Santa gift these fan bases a much-needed victory? These franchises haven’t exactly been nice this year, but maybe they’ll pull out a Christmas miracle as the season comes to a close.