NFL insider notes: What’s next for the Rams? Plus, QB uncertainty in Washington and more from Week 16 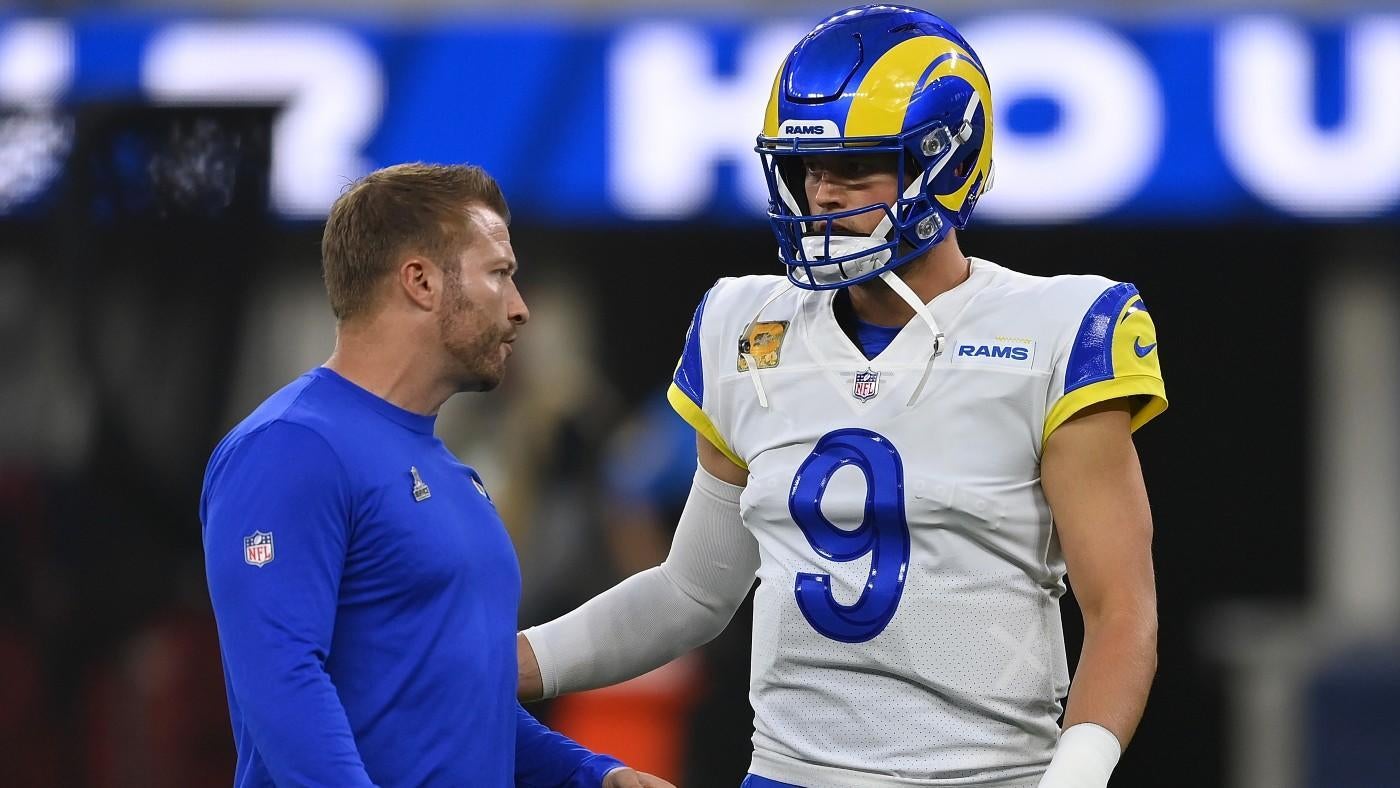 The Los Angeles Rams are hurtling toward one of the most unremarkable seasons following a Super Bowl in NFL history, and they’ll be faced with a major decision as to the direction of the franchise.Does the team continue its “all-in” nature in 2023, or does it relent in its ways a bit for what could be a more sustainable path forward?The answer to that question won’t be answered until dominos fall this offseason. The 4-10 Rams play host to the Broncos on Sunday, and two weeks from now their season will be complete. The futures of the head coach, quarterback and pass rusher will have to be known before answering the above.Matthew Stafford has already said he doesn’t plan on retiring this offseason, and that came as no surprise to the Rams. His injury landed him on the injured reserve to end his season, but if the Rams’ record were flipped, it’s highly unlikely that designation would have taken place.

Could Sean McVay decide to retire in the offseason? Sure, of course. I don’t believe folks there are operating like it’s happening, though. I don’t get the sense from within the building that there’s a dark cloud hanging over the offseason. The season has obviously been trying, and McVay will probably want some time to decompress after the season. But several sources seemed to think McVay himself probably doesn’t even know at this point.Aaron Donald could decide to hang ’em up too after flirting with the idea last offseason. Donald will have his $13.5 million 2023 salary guaranteed in mid-March, and a 2024 roster bonus of $5 million will be guaranteed that same day. Doing a full, true assessment and autopsy of the team right now is impossible. Three of their best players — Stafford, Donald and Cooper Kupp — have been injured. One of the healthiest teams in the NFL the past several years, the Rams have had little injury luck this season, and that’s shown more along the offensive line than anywhere else.

While the Rams aren’t swimming in cap space in 2023, they will have some flexibility. Teams like the Bucs and Saints will be tens of millions over the cap, while the Rams will likely only need to do a couple cap maneuvers to free up more than $15 million in space.The injuries to Stafford, Kupp and Donald aren’t considered major, either. The Rams should have the core of their team fully healthy for the first day of offseason workouts with nothing lingering into the summer.No, the Rams don’t have a first-round pick again, as the Stafford-Jared Goff trade comes to a close. But they have their second- and third-round picks, plus a few compensatory picks coming their way. McVay will need to find a new offensive coordinator with Liam Coen going back to Kentucky, though McVay could hire from within and promote Thomas Brown to the position.

Plenty of important questions face the Rams this offseason, but none that they should plan to have answers for any time soon.Bears suddenly in No. 1 overall pick conversationThe 3-12 Chicago Bears are finding themselves in a very unique position with two games left in the regular season.The top of the draft is far from certain right now. The 2-12-1 Texans would have the No. 1 pick if they don’t win any more games, but there are six total teams with no more than four and a half wins right now: Texans, Bears, Seahawks (via Broncos), Lions (via Rams), Cardinals and Colts.

Of those teams, the Bears and Cardinals would certainly not go after a quarterback at the top of the draft. The Seahawks and Lions would probably not. The Colts very possibly could. And the Texans almost certainly would.The Bears have the No. 2 pick today with games against a Lions team still in the playoff hunt and a Vikings team possibly jockeying for playoff seeding in Week 18. There’s no guarantee they’ll win another game.Because Chicago doesn’t need a quarterback, and if the Bears get ahead of the quarterback-needy Texans, a top overall pick going to Chicago could become extremely valuable to general manager Ryan Poles. If an NFL team has fallen in love with Bryce Young or C.J. Stroud, what would they be willing to give up in an auction to get ahead of Houston?

Recall the Bears don’t have their own second-round pick after trading for Chase Claypool before the trade deadline. That pick will be in the 30s, and it very likely could be the 32nd overall pick after Miami had to forfeit their first-round pick following the tampering investigation. (The Bears do have Baltimore’s second-round pick from the Roquan Smith trade.)Owning that top pick could allow Poles to own the course of the NFL draft and chart the future of the proud Bears franchise that was already blessed to have Justin Fields in-house. I’m not advocating for tanking here, but there’s plenty of job security in Chicago between Poles and head coach Matt Eberflus, both in their first years.Chicago hinted at being competitive halfway through the year when it was 3-4, but ultimately the Bears have gone 1-7 in one-score games this season. The players will keep fighting hard and try to derail Detroit’s season next week, but I think it’s inarguable that getting the No. 1 overall pick would mean more to the long-term success of the Bears franchise than a Week 17 win in a playoff-less season.

QB change in Washington?As you know, when the head coach benches the starter and then doesn’t commit to naming a starting quarterback in the post-game press conference, it’s normally a sure sign of what’s to come.For the Washington Commanders, all signs point to Carson Wentz being named the starter for Week 17 against the Cleveland Browns. Head coach Ron Rivera pulled Taylor Heinicke in the second half of Saturday’s 37-20 thumping in the Bay, and Washington is holding on for dear life to its playoff hopes.At 7-7-1, the Commanders will go into Week 17 occupying the seventh and final seed in the NFC no matter the results of Sunday’s games. With the Giants holding the tiebreaker in the series, Washington is essentially fighting only for that seventh seed down the stretch with Seattle, Detroit and Green Bay.

Heinicke provided a spark for the team when it needed it midseason, and the team clearly played better when he went in. But the bloom has seemingly come off that rose. The Commanders haven’t won a game since Nov. 27, and Heinicke simply hasn’t done enough to get the offense going.Rivera has to try something in these final two weeks to get the team in the playoffs for the second time in three years. It seems obvious he’ll give Wentz the first-team reps this week ahead of the Browns game.Another dirty play?The number three has held great prominence in recorded human history. Pythagoras found three to be the perfect number. Three is crucial in writing, especially relating to the principle of the rule of three. And it’s appropriate to be having this conversation on Christmas Day, since three holds such significance in Christianity.

If you commit an act three times, you develop a reputation. That’s what’s happening to Patriots quarterback Mac Jones.On Saturday against the Bengals, Jones took a dive at the legs of Eli Apple on a play that ultimately was whistled dead. It was an unnecessary play by Jones, who was cutting a trailing player who wouldn’t be involved in the result of the play. This is putting it charitably.Against the Bears earlier this year, Jones slid on a scramble and took his cleats up high into safety Jaquan Brisker’s groin area. And last year, Jones appeared to unnecessarily grab and twist Panthers edge rusher Brian Burns’ ankle following a strip sack.

Even if each one is accidental, each offense is unnecessary. Word gets around in the league, and this isn’t a reputation Jones should want to wear.It’s the rule of three. I didn’t make up the rules.Vikings’ close wins no flukeI wrote about this a couple months ago, but it bears repeating: the Minnesota Vikings are the most clutch team in the NFL. It was clear before the Saturday win against the Giants, but it should be exceedingly clear after the game-winning drive to beat the Giants on a 61-yard field goal.The absolute first thing head coach Kevin O’Connell focused on when he got to Minnesota was shoring up their end-of-half woes. The Vikings squandered so many opportunities in 2021 that it was maddening to the offensive-minded head coach. Situational football has been preached since Day 1.You may look at the 12-3 Vikings and say they’re lucky. They’re 11-0 in one-score games. That doesn’t happen.I look at them and say when they need to go win the game, they do.The Vikings have a plus-5 point margin this year. That’s by the far the lowest of the eight teams in the NFL with double-digit wins.But in the final four minutes of the second and fourth quarters, the Vikings have a plus-34 point margin, good for fourth-best in the league. Their 110 points are second-most in the league behind the Bills. Their three turnovers are tied for second-lowest. And the defense is tied for a league-high 10 takeaways.If you consider one-score games a coin flip then, yes, the Vikings have gotten extremely lucky for 11 of their games to land on heads. But when you’ve engineered your program to make you better than the majority of the league at end-of-half situations, you realize that one-score games are hardly a coin flip at all.