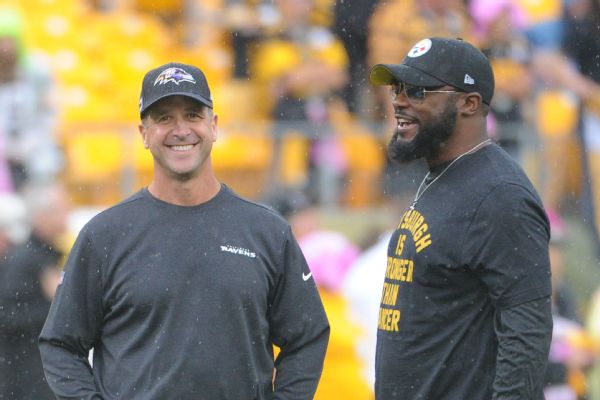 BALTIMORE — Now, a national television audience will see the Baltimore Ravens and Pittsburgh Steelers try to derail their AFC North rival’s late-season aspirations.The Steelers at Ravens game on Jan. 1 got flexed from a 1 p.m. ET kickoff to an 8:20 p.m. one at M&T Bank Stadium. This AFC North rivalry game bumped the Rams-Chargers, who will now play at 4:25 p.m. ET.The Ravens (10-5), who clinched a postseason berth Saturday, likely need to win their final two games to capture their first AFC North title in three years and play host to a wild-card playoff game. Baltimore could also eliminate Pittsburgh (7-8) from postseason contention – if earlier games that Sunday hadn’t ended the Steelers’ slim playoff hopes already — and hand Mike Tomlin the first losing season of his 16-year NFL head coaching career.1 RelatedThis marks the first time that the Ravens and Steelers will face each other in prime time in four years. From 2001 to 2018, Baltimore and Pittsburgh met 14 times in prime time over an 18-year period (including nine straight years from 2007 to 2015).In this close rivalry, it’s not surprising that, in the last 15 prime-time meetings, the Ravens have won eight times and the Steelers have won seven.