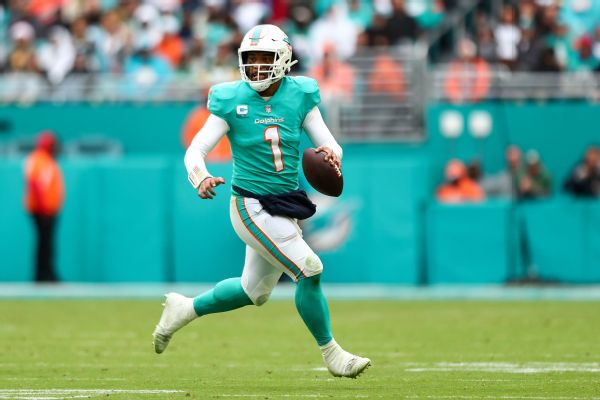 5:17 PM ETMarcel Louis-JacquesESPN MIAMI — Miami Dolphins quarterback Tua Tagovailoa has entered the NFL’s concussion protocol following the team’s loss Sunday to the Green Bay Packers, head coach Mike McDaniel said.McDaniel said Tagovailoa displayed and admitted to having concussion symptoms when he spoke with team doctors Monday and was immediately placed into protocol. He added that he’s unsure on which play Tagovailoa may have initially sustained the concussion. It marks the second time this season Tagovailoa has been placed into protocol.Backup quarterback Teddy Bridgewater will take first team snaps while Tagovailoa is out but McDaniel said it’s too early to name a starting quarterback for the Dolphins’ game this Sunday against the New England Patriots.”I just want guys to really be done right by by the information we have, the science and all the medical expertise that we rely on,” McDaniel said. “I care very deeply about each and every player, I take that very serious. I just want him to get healthy and have peace of mind in that regard … It’s about the human being and making sure he’s squared away.”Tagovailoa previously entered concussion protocol following the Dolphins game against the Cincinnati Bengals in Week 4, when he was briefly hospitalized after hitting his head on the turf. He went on to miss the team’s next two games and returned in Week 7.Tagovailoa took another hard hit four days before the Cincinnati game during a win over Buffalo. He appeared to show concussion symptoms but was evaluated and stayed in the game.The NFL later changed its concussion protocol to mandate that any player who shows possible concussion symptoms — including a lack of balance or stability — sit out the remainder of a game.Tagovailoa said in October that injuries like the one he sustained against the Bengals don’t weigh on him; it was the second time in his playing career that he was hospitalized for a football-induced injury, including the displaced hip he sustained during his final season at Alabama.”I would say those kinds of things weigh more on my parents than they do for me, just with me being their son,” he said in October. “But I mean, I just want to go out there and do good – do good for our team, do right for this organization, do right for the guys inside the building that I see every day that work really hard. That’s all. I mean, I enjoy being here. I enjoy all the guys in the building. So when I’m not able to do something about it and help our team and our organization, then that just really sucks.”Tagovailoa has set career-highs this season in every major passing statistic, but the Dolphins have lost four straight games and are currently the No. 7 seed in the AFC playoff picture. They can secure their first playoff berth since 2016 if they win out, or if they win one game and the New York Jets lose one of their remaining games.Miami plays the Patriots and the Jets to close out its regular season schedule.The Associated Press contributed to this story.