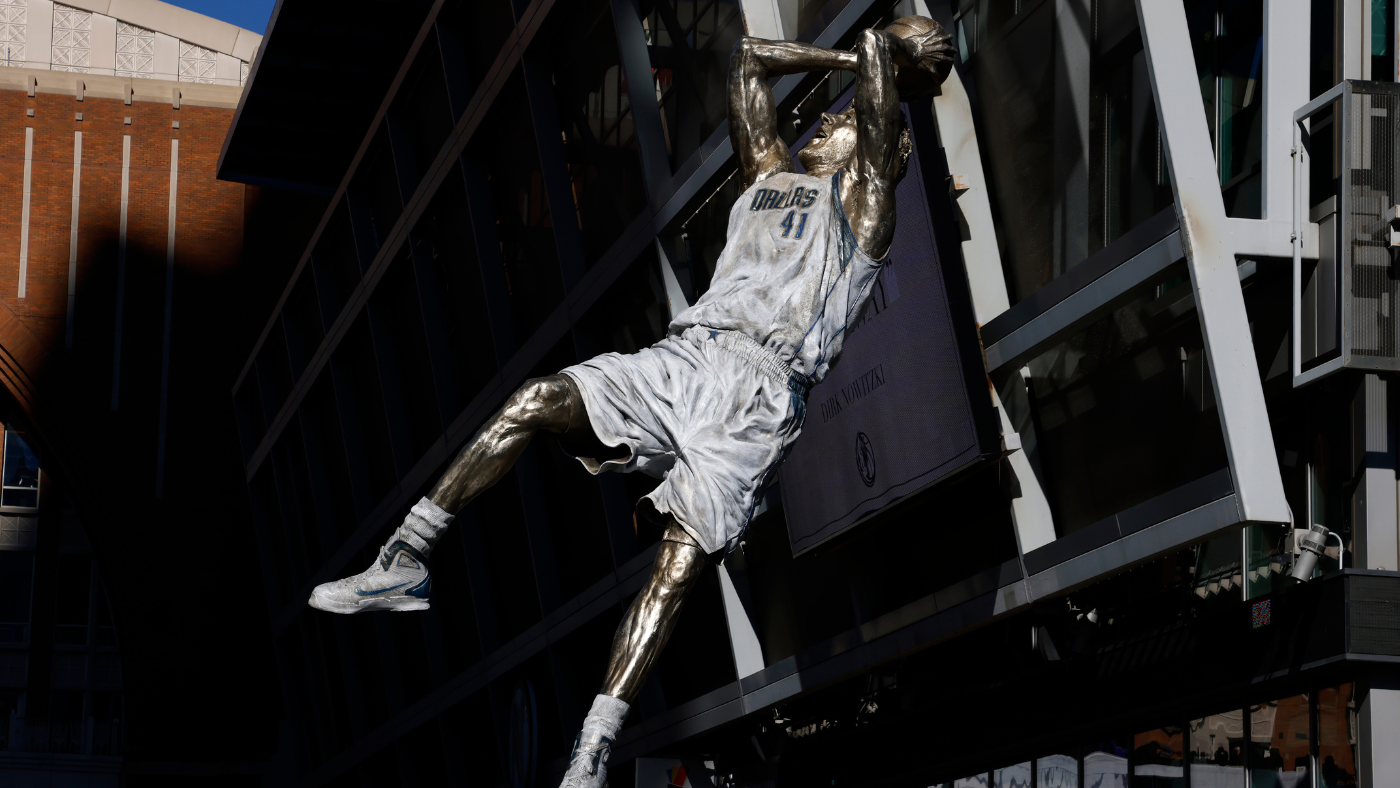 The legend of Dirk Nowitzki will live forever in Dallas, and on Christmas Day he was further immortalized with a statue bearing his likeness. From now on, visitors to the American Airlines Center will be greeted by a bronze, 23-foot sculpture of the Hall of Famer doing his signature move: the one-legged fadeaway. Feast your eyes on this thing:
In front of a crowd of fans — and players, including Luka Doncic, the heir to Nowitzki’s throne, and former teammate Shawn Marion — Dallas Mavericks owner Mark Cuban unveiled the statue. “Three, two, one,” Cuban said. “Bam!”
Nowitzki was drafted No. 9 in 1999 and booed at home as a rookie. He made his first of 14 All-Star appearances in 2002, was named Most Valuable Player in 2007, led the Mavericks to their first and only championship in 2011 and retired in 2019 as the franchise leader in virtually everything. He spent the entirety of his extraordinary, 21-year NBA career in Dallas. “Merry Christmas,” Nowitzki said to the crowd. “Thank you guys for sharing your Christmas morning with us and with me. It means a ton, I’m truly humbled. I’m going to leave you guys with a motto.” He then explained that, on the base of the statue, there is a sentence underneath his name. “It is actually 21 letters for 21 years, and I think it sums up my career here for the Dallas Mavericks perfectly. And it says, ‘Loyalty never fades away.'”

The statue is the work of Omri Amrany, the sculptor behind the Michael Jordan statue in Chicago and the Magic Johnson and Shaquille O’Neal statues in Los Angeles, among others. He told D Magazine that he had “started bugging” Cuban over email after Nowitzki’s last home game — the Mavericks honored Nowitzki post-game, and during the ceremony Cuban promised Nowitzki “the biggest, most badass statue ever.”In a team-produced video, Nowitzki said that was the first he’d heard of him getting a statue in front of the arena:
Here’s Nowitzki describing the ceremony as “super special” and “super emotional” and appearing to be generally thrilled about the whole thing:
In related news, Doncic arrived at the American Airlines Center in style:

Dallas will host the Los Angeles Lakers in the second game of the NBA’s five-game Christmas slate at 2:30 p.m. ET.