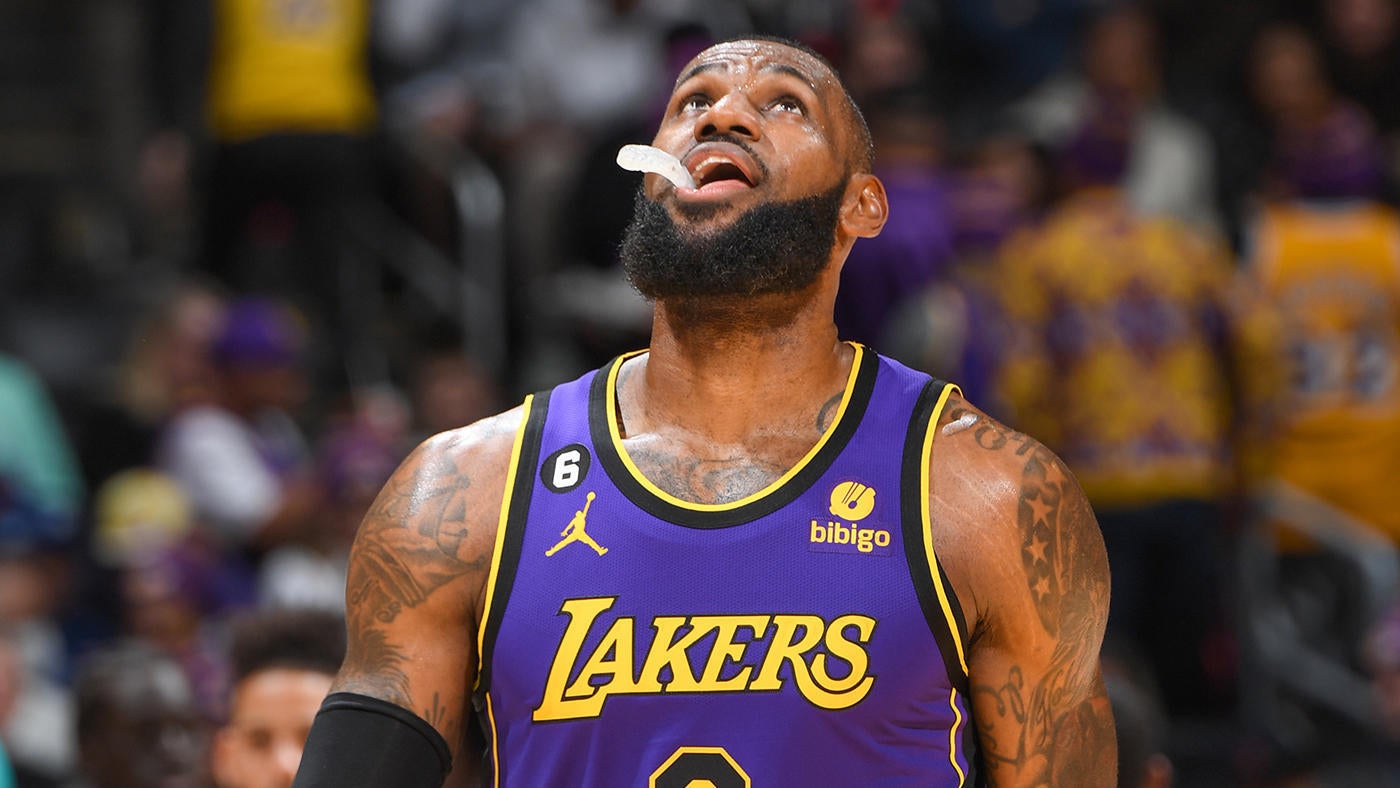 The end of Friday night’s game between the Los Angeles Lakers and Charlotte Hornets probably isn’t what Dr. James Naismith envisioned when he invented the modern game of basketball. The final minute of the Lakers’ 134-130 loss was marked by goaltending calls, turnovers and one unbelievable moment involving LeBron James.With six seconds remaining in the game, the Lakers had possession down by two points, with a chance to tie or take the lead. James took the sideline inbounds pass from Patrick Beverley and quickly started his move toward the basket. The problem? Only one of his shoes decided to come with him.As he tried to plant on his socked foot, he slid across the Lakers logo on the Crypto.com Arena floor and fell to the hardwood. Credit to James for having the awareness to find Dennis Schroder in the corner before being called for a traveling violation or dropping the ball out of bounds. Schroder actually ended up with a wide-open look, but the shot didn’t fall and the Lakers came away with the same “L” that LeBron slipped on.
This was the craziest part of an incredibly confusing and sloppy finish to the game. In a tie game with 42 seconds left, LaMelo Ball made a horrible bounce pass that landed directly in the hands of Lakers guard Austin Reaves, who swiftly dribbled down the floor on a fast break. Reaves threw a pass that appeared to be directed toward Beverley, but both Beverley and the trailing Russell Westbrook both got a hand on the ball as it ricocheted out of bounds.

Then, what turned out to be the game-winning basket by Hornets forward Gordon Hayward didn’t even go through the hoop. Hayward gathered the offensive rebound after a missed 3-pointer by Terry Rozier, and quickly put the ball back up off the glass, but it rolled off the rim. A replay review confirmed that James touched the ball after Hayward’s shot hit the backboard, therefore it was ruled a goaltend and two points for Charlotte.This was a wild way to lose a very winnable game for the Lakers, especially after erasing a 16-point second-half deficit. With Anthony Davis out for at least another week or so, the Lakers absolutely have to win games against the bottom-feeders of the league (Charlotte entered the game with eight wins) if they’re going to have any shot at getting into the Western Conference playoff picture.

James scored 18 of his 34 points in the fourth quarter, also finishing with eight assists, while Reaves added 20 points off the bench. The Lakers will look to right the ship on Christmas Day in a tough road matchup against Luka Doncic and the Dallas Mavericks.