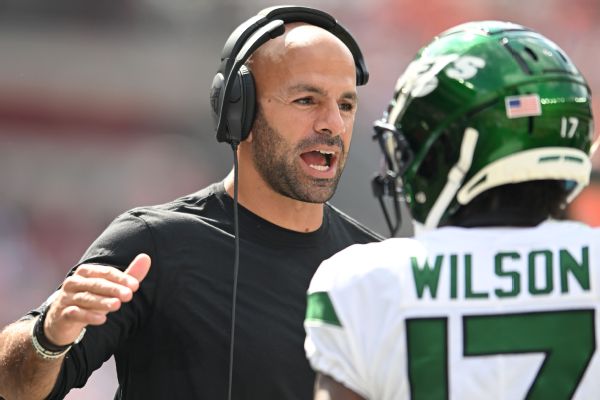 FLORHAM PARK, N.J. — The New York Jets are heading into their mini-bye — and likely beyond — with a major quarterback question.The beleaguered Zach Wilson appears to have lost the confidence of coach Robert Saleh, who was noncommittal Friday on his Week 17 quarterback plans. Wilson could be benched again even if Mike White isn’t cleared to face the Seattle Seahawks on Jan. 1 because of his fractured ribs.”We’ve got time,” Saleh said, passing on an opportunity to confirm Wilson’s status. “I don’t have those answers for you yet.”2 RelatedThe Jets’ other options are Joe Flacco and practice-squad quarterback Chris Streveler, who sparked the offense, albeit briefly, in a relief role Thursday night during a 19-3 loss to the Jacksonville Jaguars.Wilson played so poorly that he was booed throughout the game and spent the final 18 minutes on the bench, watching Streveler, a journeyman in his season debut, energize the team and the MetLife Stadium crowd.The Jets (7-8) have dropped four straight and their playoff chances are “far-fetched,” Saleh acknowledged, but Wilson’s future remains a hot-button issue.On Friday, Saleh was lukewarm on Wilson, the No. 2 overall pick in 2021. Asked if he was still confident that Wilson is the franchise’s quarterback of the future, Saleh said, “We’re never going to quit on anybody. I’ve got confidence in all our guys.”It was a noticeably different stance from Saleh, who usually had effusive praise for Wilson.White will be reevaluated early next week with more rib scans. If he is cleared for contact, he will almost certainly start against the Seahawks. Saleh hasn’t named a permanent starter since benching Wilson on Nov. 23, saying it’s a week-to-week evaluation.On Friday, Saleh all but admitted that Wilson is struggling from a mental standpoint.”That’s a good question,” Saleh said on whether Wilson has lost his confidence. “I’m with you. It’s a tough thing to try to overcome, but — but — it doesn’t take much to flip confidence. He just needs to get on a little run.”Against the Jaguars, Wilson was 9-for-18 for 92 yards, leading the offense to only three points in seven possessions — and the field goal was a gimme because New York got the ball on the Jacksonville 16 after a turnover.Trying to spark a dormant rushing attack, Saleh inserted the mobile Streveler, who had been elevated from the practice squad before the game. Streveler promptly led a 76-yard drive that eventually fizzled, but he did enough to stay in the game. He wound up rushing for a team-high 54 yards and completing 10 of 15 passes for 90 yards.Flacco, who was also active, never saw action.Wilson, who ranks 28th out of 33 qualified passers in Total QBR (37.5) this season, admitted it’s hard to watch another quarterback spark the offense.”It is, and that’s when I’ve got to look myself in the mirror,” he said. “I’ve got to go back and I’ve got to go back and watch this tape. You’ve got to be hard. You’ve got to be hard on yourself. You just say, ‘Why are we not moving the ball?’ And that starts with me. Whatever it is, I’ve got to figure it out.”Statistically, the offense has run more efficiently with White, Flacco and even Streveler than with Wilson. Offensive coordinator Mike LaFleur declined to comment on why.”I’m not going not answer that one,” LaFleur said Friday. “I’m not trying to compare Zach to all the other guys. I have to figure it out and figure out a way to get him in a rhythm, and I haven’t done that.”