James Harden may be interested in returning to the Rockets, but a reunion makes no sense for Houston 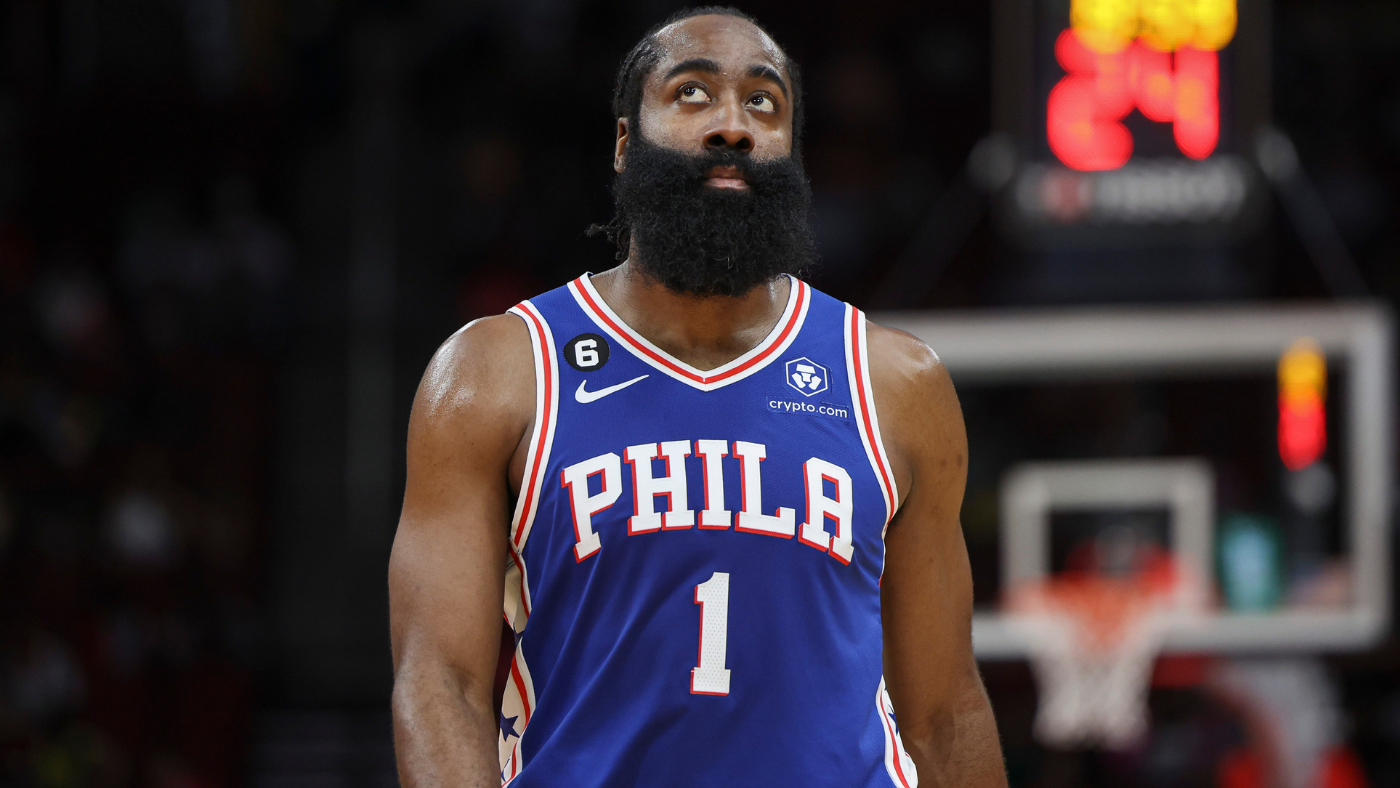 When James Harden wanted to join the Brooklyn Nets, he showed up to training camp in 2021 out of shape, played with minimal effort for a few weeks and then publicly suggested that his existing situation could not be fixed before getting his wish. It feels like ancient history. This happened 23 months ago.

A bit more than a year later, Harden wanted out of Brooklyn so badly that he played with such pitiful effort in a loss to the Sacramento Kings that he managed only a meager four points. That was his last game as a Net. It was played roughly 10 months ago.

It’s becoming an almost annual occurrence at this point. James Harden forces his way somewhere. James Harden doesn’t like that somewhere. He tries to find a new somewhere. The cycle began anew on Christmas Day, when ESPN’s Adrian Wojnarowski reported that Harden is seriously considering a return to Houston as a free agent this summer. “But Sam,” you’re probably thinking,” Harden said he was happy in Philadelphia after Sunday’s game, doesn’t that mean this is all nonsense?” Well, remember when Steve Nash said Brooklyn wouldn’t trade Harden? If you still believe that, I’ve got a bridge to sell you in Brooklyn, and it’s one that Nash no longer uses on the way to work.

It’s quickly becoming Harden’s defining trait as he ages out of the megastardom that made him worth all of this in the first place. He’s always been unreliable in big moments. Now he can’t make it through a regular season without destabilizing a team. The Nets and 76ers were willing to roll those dice because they thought he was good enough to help them win a championship. He wasn’t in Brooklyn. He might in Philadelphia, but it’s not looking especially likely. There’s no reason that the third time needs to be the charm.

The Rockets, after all, have little in common with the Nets and 76ers. They aren’t pushing to contend for a championship right now. They’re rebuilding slowly and methodically. Their roster is so young at the moment that eight of their nine players who have racked up at least 400 minutes this season are 22 or younger. By the time that group is ready to win, the already-declining Harden will by 35 or 36, and given his conditioning habits, likely not aging as well as contemporaries such as Chris Paul and LeBron James have. From that perspective, a Harden-to-Houston reunion makes almost no sense.

Frankly, it probably wouldn’t even if Harden was going to age well. Houston’s two most prominent young players are Jalen Green and Kevin Porter Jr. Both are extremely high-usage guards. The Rockets have encouraged that in the hopes that it would foster development. Porter ranks 20th in the NBA in touches per game at 79 per game, just behind LeBron James. Green isn’t handling the ball quite as often, but he’s attempting more shots. The 17.6 field goal attempts he takes each game ranks 31st in the league between Zach LaVine and Anthony Davis. This is, again, according to Houston’s plan. The idea is to let Green and Porter figure things out now so that in a few years, they’ve worked through their mistakes and are ready to win.

Both could stand to grow the rest of their games. Watching Harden dribble doesn’t sound like a great way to do that. The NBA tracks the total distance every player moves on both offense and defense in every game. Houston’s offense ranked dead last in movement in each of Harden’s last five seasons as a Rocket. His teammates aren’t moving and cutting and engaging with the offense. They’re standing in designated positions behind the 3-point line waiting for him to make a decision.

His presence would hinder Green and Porter. It might derail Alperen Sengun, the antithesis of Harden’s preferred lob-catching center. Sengun’s gift is his ability to act as an offensive fulcrum at the center spot. Harden isn’t giving him that kind of freedom. Jabari Smith, the No. 3 overall pick, came into the NBA needing to develop his ability to create his own shot in order to reach his All-Star potential. He’s having a hard enough time doing that with all of the mouths the Rockets already need to feed. There’s another one coming in June when the Rockets will presumably have yet another high lottery pick. Nobody benefits from Harden pounding the rock.

Except maybe Harden, who seemingly left money on the table this offseason by declining his player option and allowing the 76ers the flexibility to sign P.J. Tucker and Danuel House. Yes, he technically could have made more had he simply picked up his option, but by not doing so, he earned another player-option for the 2023-24 season. For all we know, that’s the longest deal he could have realistically gotten. Philadelphia would have been justified in hesitation on a long-term commitment after the postseason he had for them. The only teams with cap space last summer, aside from the Knicks who were dead set on Jalen Brunson, were teams expected to rebuild. They weren’t going to sign an aging Harden.

That’s where Houston is today, but it should be noted that if Philadelphia doesn’t plan to invest in Harden’s future, the Rockets at least have the cap space to do so if they choose. Houston is looking at just under $60 million in cap space this summer, according to Keith Smith. At a minimum, it makes sense for Harden to use Houston as leverage against Philadelphia if he wants to maximize his next payday. If he’s really interested? That cap space is probably a big reason why. Don’t expect Harden to go anywhere for the minimum.

But there are significantly more constructive ways for Houston to use that cap space. Players who are likely to retain their value for the duration of a multi-year contract is probably a good place to start. They could use that space to absorb bad contracts in exchange for draft capital, as many rebuilding teams have in the past. They could even use it to avert longer-term costs by front-loading extensions for existing players using the league’s renegotiation-and-extension rules.

Paying a player like Harden means trying to win right away. Maybe the Rockets could do that. After all, trading him helped give them a war chest of draft picks that could be flipped to get him new support. Just remember that Harden wasn’t satisfied with Kevin Durant, and if he leaves Philadelphia, it means he wasn’t satisfied with Joel Embiid either. Who could the Rockets trade for that are better than them? Would it even matter? If Harden keeps declining, there’s not going to be any superstar capable of carrying him to a title on a max contract soon enough.

The theoretical blueprint for Harden returning to Houston was drawn by LeBron in 2014. When he left the Cavaliers in 2010, they had almost nothing. His four-year absence gave them time to accumulate the picks and assets they needed to rebuild a winner around him the second time around. Perhaps Harden is hoping for something similar, a title push fueled by a combination of Houston’s incumbent young players and the assets it could use to get him some older ones.

There are a number of differences. LeBron is a significantly better player, for example, and having won two championships already, he had proven himself on the playoff stage in ways Harden simply hasn’t. He was also younger, rejoining the Cavs at the age of 29. Harden will be 34 before next season begins.

But the biggest difference is that, despite the notorious reaction to The Decision, the Cavaliers had reason to trust James. He explained himself eloquently in his return essay to Cleveland. He’d made it clear early in his career that his goal was to bring a championship to his hometown, and that he was returning to finally do that. He staked his legacy on that move.

Harden doesn’t really have a legacy to stake here. If he does, it’s one of dissatisfaction and disappointment. Harden forced his way to Brooklyn and failed. A year later, he forced his way to Philadelphia, and if he’s gone this offseason, it means he failed yet again there. For all of his individual gifts and justified regular-season acclaim, there’s just no reason to believe that he wouldn’t fail again in Houston. Nothing for him has materially changed. Quite a bit has for a Rockets team that’s looking pretty promising without him. The last two teams that gave Harden what he wanted for quickly met with buyer’s remorse. The third time wouldn’t be the charm. It would be a potentially catastrophic blow to an up-and-coming team that, unlike the 76ers and Nets, owes its optimism largely to what happened as a result of him wanting to leave their team.