How Matt Ryan’s season with the Colts fell apart 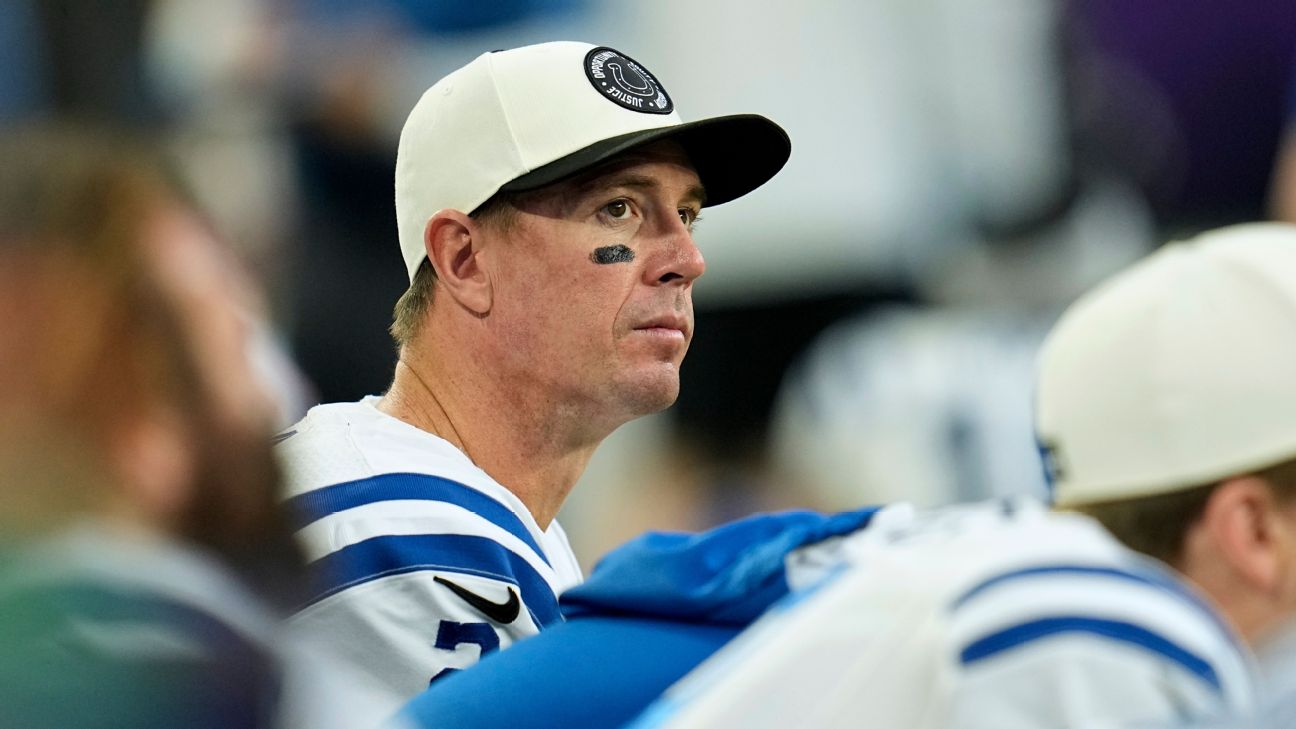 “But I really appreciate Matt. He just gave me so much perspective on how to continue to be successful in the league from a leadership standpoint. I’ve learned a ton from him.”Ryan’s consistency helped make for an easier transition when interim coach Jeff Saturday reinstated him as the starter in Saturday’s first game, against the Las Vegas Raiders in Week 10. Jonathan Taylor, the 2021 rushing champion who’d battled a sore ankle all season, rushed for 147 yards, the offensive line performed well, and Ryan had an efficient day (21 of 28, 222 yards and a touchdown) in a 25-20 win.But things have steadily devolved since, with the Colts losing their past four games, including last Sunday’s historic defeat in Minnesota. The Vikings pulled off the greatest comeback in NFL history, rallying from a 33-point halftime deficit. The offense sputtered as Ryan struggled to make plays down the field. Despite the Colts’ nine possessions in the second half and overtime, they managed to cross midfield just twice.Ryan’s 5.5 yards per attempt in the game matched a season low and was symbolic of the punchless Colts offense. There have been opportunities for more aggressive shots down the field that Ryan hasn’t always taken, and coaches have noticed. It’s why he ranked 32nd in air yards per pass attempt (6.2) entering Week 16. It seems the hesitance was brought about by Ryan’s apparent diminished arm strength — the shoulder injury hasn’t helped — as well as a desire to avoid the costly turnovers that helped kill the Colts’ season.”He’s been sacked a lot, he’s been hit a lot, a bunch of turnovers and that’s not always on Matt,” Saturday said. “There’s a lot of different pieces and parts that haven’t gone to plan. It definitely changes you.”Not all of Ryan’s problems were of his own making, as the Colts’ offensive line struggled throughout the season. AP Photo/Jack DempseyONE UNANSWERED QUESTION remains: Should the Colts have seen this coming?Maybe.Start with the numbers. Ryan had what was the lowest adjusted QBR of his career last season in Atlanta (52.2). That’s dipped even farther this season, falling to 43.6. Taking it a bit further, the four lowest adjusted QBR marks of Ryan’s career have each come in the past four seasons, suggesting the decline began long ago. As for Ryan’s league-high 15 fumbles (five lost), they might seem surprising. Then again, he did have 11 last season.But the Colts didn’t do Ryan any favors, either.The decision to enter the season with Matt Pryor as the left tackle looks indefensible in hindsight. Ryan has never been mobile, and his immobility became a fatal flaw with Pryor playing poorly at a position he’d never played. Pryor gave up 12 sacks in nine starts before being benched. Instability at right guard exacerbated the problem and the weak links impacted the performance of remaining veterans like All-Pro left guard Quenton Nelson.Now, Ryan is left to contemplate his future after the Colts’ final three games. The team has some decisions to make, too. Ryan has a year left on his contract, with $12 million of his 2023 salary guaranteed.But thoughts about next season have been mostly postponed given how the current season is playing out.”It’s been tough,” Ryan said. “It’s been tough sledding, and I haven’t performed well enough, consistently enough.”If this is it for Ryan, 2022 hasn’t been the ending anyone wanted. Neither Ryan nor the Colts could have been more wrong about what their partnership would produce.