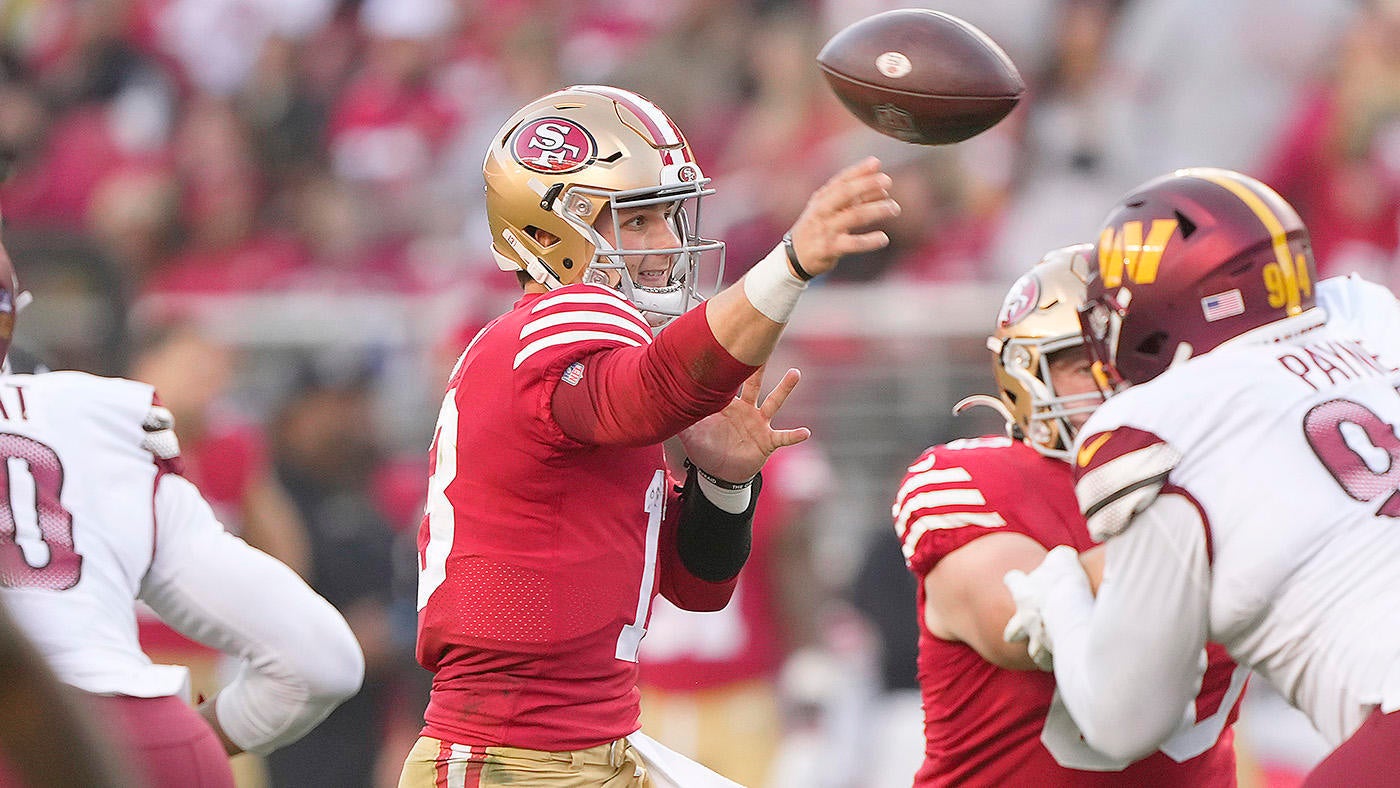 Weather was a major factor in Week 16 in the NFL, as a cold front descended across much of the country. With the wintry weather brought disappointing performances from the league’s first- and second-year quarterbacks. We had nine of them see considerable action over the holiday weekend.Let’s dive deep into the individual efforts of each quarterback and assign a grade on a per-snap basis, taking every individual aspect of their performance into account. At least 10 attempts are needed to qualify for this piece, which is published each Tuesday during the NFL season.

High-Caliber Throws/Plays Late in the third, Jones threw with ideal timing and accuracy on a long out-breaking route for 19 yards. Jones connected on probably his best throw of the season in the fourth, a 32-yard pass down the middle to Kendrick Bourne in traffic.His next throw to Bourne for a touchdown needed loads of confidence, as he threw it directly over the shoulder of the defensive back in the end zone.Later in the fourth, he fit a long pass in one of the sideline holes of Cover 2 to Bourne.Low-Caliber Throws/Plays In the first quarter, he was off-target on an in-breaking route run by Jakobi Meyers. To start the fourth, Jones uncorked a long ball down the left sideline that should’ve been intercepted but was dropped.  In the same quarter, he had a bad and very dangerous intentional grounding that was nearly a fumble when he tried to shovel the pass as he was being taken to the turf. On the final drive of the game, Jones was forced to his right and had Rhamondre Stevenson open right in front of him but misfired. Summary: The 22-0 hole opened things up for Jones in this game, and it was refreshing to see. There were still some missed layups and inaccurate throws at the intermediate level, but more impressive throws than usual.Week 16 Grade: C+Season Grade: C

High-Caliber Throws/Plays Late in the first, Lawrence squeezed an out-breaking route into Dan Arnold’s chest with a sinking outside corner lurking. Early in the third, he threw with perfect velocity and ball placement on an out-route near the sideline.  On 3rd-and-7 in the fourth, Lawrence zipped a pass over and underneath defenders on a sideline route against tight coverage that was completed and moved the chains.Low-Caliber Throws/Plays Right before the half, Lawrence misfired on an easy throw into the flat that fell incomplete.While not the easiest throw, Lawrence rolled left in the fourth quarter and had an open receiver at the intermediate level he missed.On his second-to-last attempt of the night, Lawrence again rolled left and misfired.Summary: On the road, in a cold, rain-soaked game, Doug Pederson worked his magic. Schemed open receivers all night for Lawrence, thereby not providing many opportunities for the young passer to showcase his high-level skill. The weather has to be considered with the few misses too.

High-Caliber Throws/PlaysEarly in the fourth, he ascended in the pocket before ripping a fastball to Phillip Dorsett against tight coverage for an 18-yard gain.A few plays later, Mills made a gorgeous timing throw at the sideline to Dorsett. His second-to-last throw of the day was a bucket throw to Amari Rodgers down the sideline for 37 yards. Mills’ game-winning touchdown was a laser to Cooks in the back corner of the end zone. Low-Caliber Throws/PlaysIn the tight red zone in the first quarter, Mills slid into the pocket to avoid pressure but nearly threw an interception to an underneath linebacker.  Mills was intercepted in the third quarter on a deep comeback down the numbers run by Brandin Cooks. The throw was late. Summary: Another gutsy effort from Mills, who took some shots behind the line but made more impressive throws than bad ones in the Texans’ upset victory on the road in Tennessee.Week 16 Grade: BSeason Grade: C

High-Caliber Throws/PlaysPurdy’s first throw was a fake pitch to the right that he pulled and threw to a backside slant with a defender in his face. The ball needed major velocity and perfect ball placement, and had both.On 3rd-and-9 deep in his own end, Purdy threw with necessary timing and accuracy on a dig to Jauan Jennings for 15 yards. Low-Caliber Throws/PlaysHis second throw of the game was well short of a long comeback run by Brandon Aiyuk.Summary: Another well-schemed up game by Kyle Shanahan and another well-executed outing by Purdy. The YAC in this game was insane by the 49ers’ skill-position talent. Week 16 Grade: B+Season Grade: B

High-Caliber Throws/PlaysLate in the second, Ridder fired a long pass down the left sideline to Drake London in a back-shoulder situation. Early in the fourth, Ridder stepped away from pressure in the pocket and slinged a sidearm rocket to Drake London over 14 yards over the middle. In easily his best throw in the NFL to date, Ridder placed a gorgeous ball to Drake London between layers of coverage for 20 yards. The throw fit through tight coverage. Late in the game, he connected on a long out route for 15 yards with a cornerback making it a contested catch. Low-Caliber Throws/PlaysIn the first quarter, he took a bad sack after scrambling right when he clearly should’ve thrown the ball away as the defenders converged on him. Ridder threw behind a slant in the fourth.Summary: After a dismal first NFL start, Ridder looked noticeably more comfortable in start No. 2, although the beginning of the game wasn’t very pretty. As the game progressed, the rookie made some impressive throws and wasn’t as antsy inside the pocket against a quality defense on the road.

High-Caliber Throws/PlaysLow-Caliber Throws/PlaysMidway through the second quarter, Wilson lofted up a prayer deep down the field that should’ve been intercepted. Well underthrown.His second-to-last throw before the half was a blatant miss over the middle to an open Corey Davis. Wilson overthrew Davis over the middle again early in the third. While it would’ve been a fantastic throw in the second half, Wilson rolled right and had Garrett Wilson running across the field from right to left. The throw came out high and was ultimately well underthrown.  Summary: This was a ghastly effort from Wilson, in what feels like the final game of his Jets career. Sure, the rain did not help things, but everything about Wilson’s effort was brutal.Week 16 Grade: FSeason Grade: D+

High-Caliber Throws/PlaysLate in the first quarter, Pickett squeezed an out route to his intended target with a cornerback flying underneath. Pickett and George Pickens connected on a well-placed back-shoulder toss in the third. On the game-winning drive, Pickett rolled right and bought extra time before finding Pat Freiermuth open over the middle. A few plays later he hit Freiermuth on a back-shoulder toss. Pickett’s game-winning touchdown to Pickens was a perfectly placed seam throw to Pickens through a closing window.Low-Caliber Throws/PlaysEarly in the third, Pickett missed badly to a wide-open pass catcher in the middle of the field. While under pressure in the pocket in the same quarter, Pickett threw late over the middle and was easily intercepted.In the fourth, he was a bit careless on a swing pass to Jaylen Warren that was behind the running back and fell incomplete.Summary: This is the classic Pickett game on the positive end of the spectrum. Majority of his throws are easy, schemed-open tosses. There are a few impressive tosses at the intermediate range, and there are times when his athleticism helps him make plays while throwing on the run.Week 16 Grade: B-Season Grade: C+

High-Caliber Throws/PlaysIn the second quarter, he fit a pass into Cole Kmet on a roll out against tight coverage. Late in the third, Fields dropped one in the bucket on a long throw to Velus Jones for 44 yards. Low-Caliber Throws/PlaysHe threw low and slightly behind a swing pass in the second quarter. Summary: This was a strange game for Fields and Chicago’s offense. On a blisteringly cold day against an elite defense, the Bears didn’t utilize Fields in the designed run game anywhere close to the rate they have this season. It wasn’t a bad throwing performance either, just only one clear-cut awesome throw. Incredibly conservative offensive game plan.

High-Caliber Throws/PlaysWillis’ 14-yard score on a designed run was of the highlight-reel variety. He broke a tackle behind the line and another one down the field. Awesome athleticism and strength on display. On the final drive, he somehow shrugged off two Texans defenders near the sideline and completed a pass for nine yards. Low-Caliber Throws/PlaysHe threw a short pass low and slightly behind Treylon Burks in the second quarter. In the third he was late on a throw over the middle that was almost intercepted.The pick Willis threw in the fourth was a bad decision under pressure, and he never saw the underneath linebacker. Summary: Willis struggled with finding open receivers in this one and was noticeably antsy inside the pocket. He didn’t have a plethora of horrible throws but they outweighed his positive plays. Week 16 Grade: D+Season Grade: D+