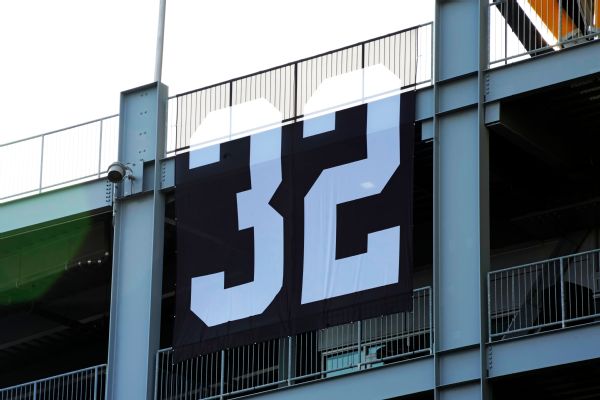 PITTSBURGH — Even as temperatures in Pittsburgh plunged to single digits, hundreds of Steelers fans came to Acrisure Stadium to watch and listen to the replay of the Immaculate Reception at 3:41 p.m. — 50 years after Franco Harris’ remarkable play.Dok Harris, Franco’s son, was among them, smiling as he watched the play on a small television and listened to Jack Fleming’s original radio broadcast play-by-play.”I’ve heard that so many times,” Dok Harris, speaking to ESPN, said of the radio call. “It’s really hard to process, but it’s been hitting really differently over the last few days. What’s difficult and what’s also beautiful is that this isn’t something for my mother and for me, this for everybody.”My dad had such a personal relationship with so many people, the city, this country, all over the world. And a lot of people are hurting and a lot of people are mourning, and they really are all family.”Fans cheered loudly as Franco Harris scored the touchdown to seal the Steelers’ playoff victory and soon, a ‘Here we go Franco!’ chant broke out in the Great Hall, a concourse of the stadium filled with team memorabilia.2 RelatedFor Dok Harris, Friday’s anniversary was another reminder of the connection his dad, who died this week at the age of 72, shared with so many people.”It’s almost impossible to process that he could give so much to so many people personally,” Dok Harris told ESPN. “People (have been) telling me stories about how they met him sometime in 1977 or 1987 or 1991. It was important to them, and it made a difference in their lives. And that’s really the beauty of my father, truly a very blessed soul who just really sought to helped help everybody out.”Steelers running back Najee Harris is one of those who had a special relationship with Franco Harris. Not only did the two connect over playing running back for the Steelers, but Najee Harris especially appreciated Franco Harris for his approach to community outreach.”He was the role model,” Najee Harris said. “He was obviously the icon here. He was more than just an athlete. He was a really important person, and in the organization, he turned around so much stuff. He’s the standard where we all talked about of what it is to be a Pittsburgh Steeler. Not only that, he’s the standard of what it is to be a human being. The stuff that he did around here in the community, not only just around here, but just everywhere, he tried to give back as much as he can.”With Franco Harris’ No. 32 jersey set to be retired at halftime of the Steelers’ Christmas Eve game against the Las Vegas Raiders — just the third number to be retired in franchise history — Najee Harris and teammate T.J. Watt stressed the importance and motivation in playing Saturday’s game to honor Franco Harris’ memory.”This was a huge game before the news of Franco’s passing even hit,” Watt said, “and now it’s obviously ramped up more. … I think we’re gonna see tomorrow just the impact that he had on people when the fans show up and show the appreciation for all that he’s done for Steeler Nation.”Dok Harris, too, is spending the rest of the weekend continuing to honor and celebrate his dad. After the Immaculate Reception replay, he and his family planned to proceed with his dad’s annual Immaculate Reception reunion party on Friday night, one filled with Steelers and Raiders alumni and Christmas carols, followed by attending the Steelers-Raiders game Saturday and celebrating the halftime jersey retirement.”I’m sad my dad’s not here, but we’ll make sure that we do it right because he loved throwing a good party,” Dok Harris said. “We’ll make sure that we do it how he would’ve wanted it.”