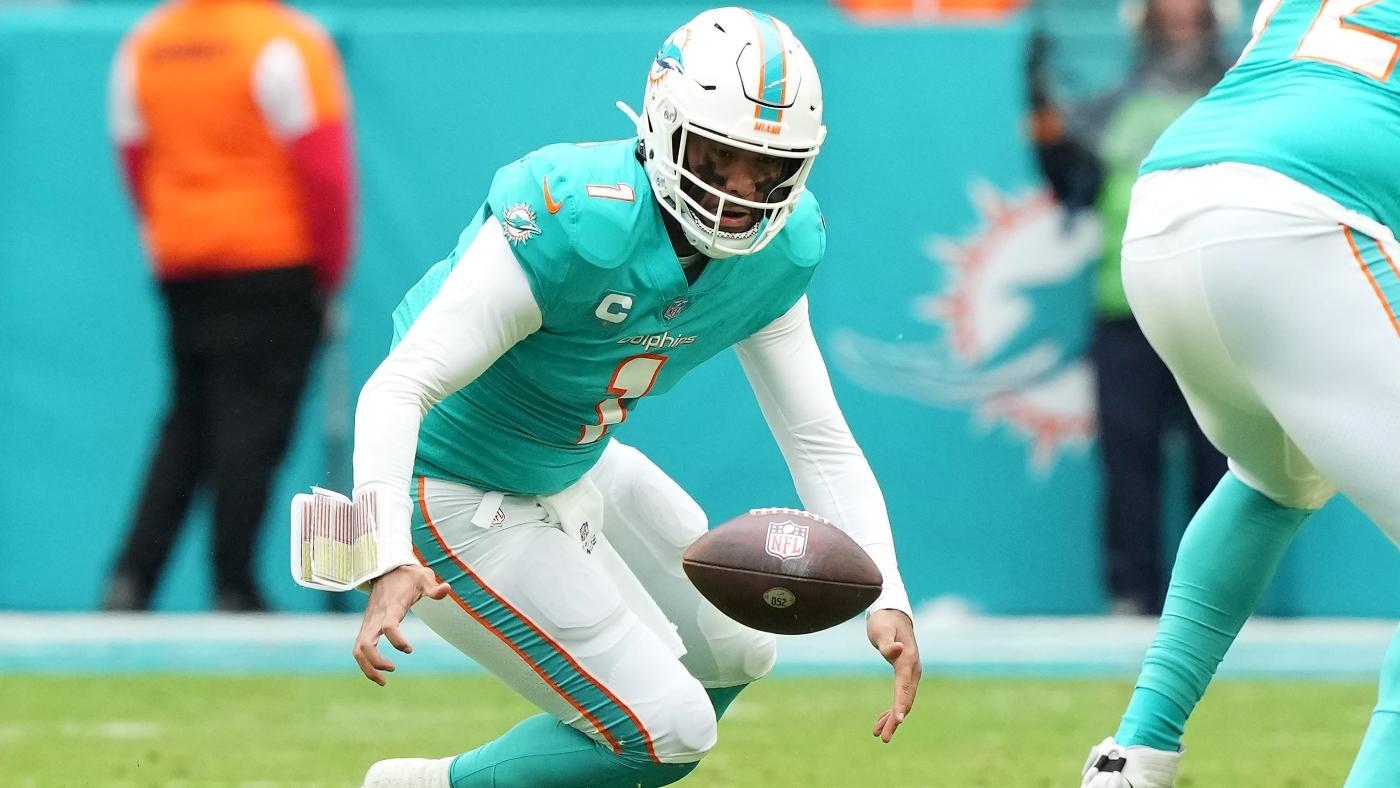 After Week 16, more than 80% of teams have been eliminated from contention in 2022. For that reason, we’ll focus at least a chunk of Believe It or Not this week on 2023 and beyond. This will be the last version of this article for the season, and so we’re going to start with a couple of quarterbacks who are fading hard down the stretch. Could we be approaching the end of their end as a starting quarterback as well?The Dolphins could replace Tua Tagovailoa at QB in 2023The Case: This would have seemed insane a month ago. Some people would say it still is, but it’s hard to overlook how bad the last month has gone for Tagovailoa. The Dolphins have lost four straight and their quarterback has as many turnovers (six) as touchdown passes. In the four-game losing streak he’s completed just 52% of his passes and owns a passer rating of 80.5. For reference, Baker Mayfield’s passer rating is 81.5 for the 2022 season.So, if this streak extends to six games with losses to the Patriots and Jets, leading to another missed playoff appearance for the Dolphins, they could absolutely look a different direction in 2023. The Verdict: Don’t believe itThe Dolphins forfeited their first round pick due to the Tom Brady scandal. And they dealt the 49ers first round pick for Bradley Chubb. Assuming the Ravens use the franchise tag on Lamar Jackson, Brady looks like the prize of the 2023 free agent class, assuming he even wants to play. After him its guys liks Jimmy Garoppolo, Mayfield, Gardner Minshew, and Daniel Jones.

The Dolphins still have one year of Tagovailoa at less than $10 million. Their best path to trying to win next year is another year for him in the system at a low cost. Maybe they bring in a better No. 2, but that person shouldn’t be a threat to his job as a starter. Whether they pick up Tagovailoa’s fifth-year option may be a different question, especially if they miss the playoffs.
The Raiders could replace Derek Carr at QB in 2023The Case: Again, this would have sounded ridiculous in the past. After all, one of the reasons Davante Adams chose the Raiders is because he wanted to play with his former college teammate. But that experiment hasn’t gone well. Carr is having one of his worst seasons as a passer, posting his worst season statistically since at least 2017. He’s tied for the league lead in interceptions and he’s not doing enough good to make up for that. Carr has not meshed well with Josh McDaniels, and if it comes down to a choice between the two, I’d expect the Raiders to choose McDaniels.

The Verdict: Believe itCarr’s current contract calls for a cap number of $34.8 million next year but he has zero dollars guaranteed. His entire 2023 contract and $7.5 million of his 2024 contract will fully guarantee on the third day of the 2023 waiver period. So the Raiders have the ability to walk away from Carr for free. They also currently have No. 9 pick in the 2023 NFL Draft and with games remaining against the 49ers and Chiefs, that should only improve. It could be another very interesting offseason in Las Vegas.
Whoever starts in at QB for the Eagles Week 17 is a Fantasy starterThe Case: This one is pretty simple. Jalen Hurts is QB3 on the season, he’s an obvious start if his shoulder has healed enough to face the New Orleans Saints. Gardner Minshew just threw for 355 yards and scored 26 Fantasy points against the Dallas Cowboys. You’ve got no reason to go away from him if Hurts is unavailable. The Verdict: Believe itMinshew was far from perfect on Sunday, turning the ball over three times in a loss to the Cowboys, but he showed he still knows how to sling it, averaging 8.9 yards per attempt on his 40 pass attempts. Nearly 60% of those passes went to his talented trio of A.J. Brown, DeVonta Smith, and Dallas Goedert. As long as he has those three, Minshew will rank as a top-12 quarterback in Week 17 if Hurts can’t go.

D.J. Moore is a must-start WR in the Fantasy championships against TampaThe Case: Sam Darnold has made four starts this season and D.J. Moore ranks as WR19 with 14.8 PPR FPPG in those four starts. He was even better in the three games that P.J. Walker played 100% of the snaps. In other words, Moore has been a must-start wide receiver this season whenever Baker Mayfield hasn’t been on the field. That hardly makes sense with the way Mayfield is playing in Los Angeles, but it is what it is. If you have Moore on your championship roster, he should be in your lineup.The Verdict: Believe itThe Panthers have become one of the best run offenses in the NFL in the past month, but it’s unlikely they’ll have that much success running the ball against the Buccaneers, who possess one of the league’s best run defenses. That should open up more pass attempts for Darnold, and 25% of Darnold’s pass attempts have gone to Moore this season.Tampa has allowed six different receivers to score at least 13 PPR Fantasy points in their last three games. Moore should be the seventh.

Cam Akers should be drafted in the first 5 rounds in 2023 redraft leaguesThe Case: Obviously, Akers’ three-touchdown day against the Broncos is a big part of the equation here, but Akers has really rounded into form over the last month, maybe even longer. He’s RB4 since Week 13 and has now scored in three of his last four games. He’ll finish the season with games against the Chargers and Seahawks, giving him an excellent chance to keep this hot streak going to end the year.The Verdict: Believe it.This will clearly be impacted by what the Rams do in the offseason. But they hardly have the salary cap space or the draft capital to add someone who would be anything more than a complementary piece to Akers. Much like Tagovailoa, the Rams have one more year of Akers under contract at a cheap rate and I would expect him to enter the season as their lead back, even if he’s leading as a part of a committee. In the last two weeks his snap rates have been above 75%, the only games he reached 75% this season. It may just be that he’s finally back to 100% after his torn Achilles in 2021.