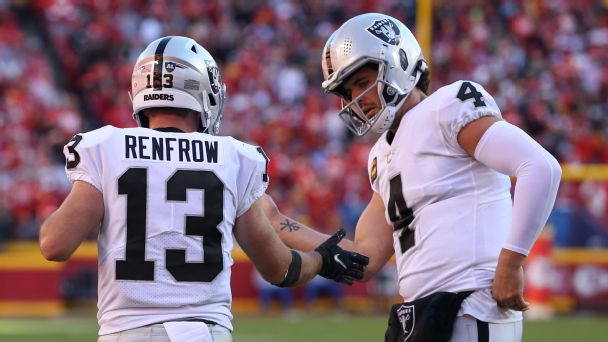 The Las Vegas Raiders got off to a hot start on a decidedly cold night in Pittsburgh with a 72-yard drive that took 14 plays and 8:22 off the game clock and gave the visiting Raiders a 7-0 lead.It was Las Vegas’ initial possession of the game, which kicked off with 8-degree temperatures and winds of 16 mph out of the west/southwest.Hunter Renfrow took a short pass on the right sideline from Derek Carr, just in front of Steelers cornerback Cameron Sutton before zig-zagging around defensive back Tre Norwood and diving into the end zone for a 14-yard score.The throw by @derekcarrqb 👀The juke by @renfrowhunter 😮@Raiders get on the board first! 📺: #LVvsPIT on @NFLNetwork 📱: Stream on NFL+ pic.twitter.com/QFaQ9w8Ajp— NFL (@NFL) December 25, 2022 It was also Renfrow’s first TD catch of the season. The 2021 Pro Bowler has only appeared in eight games this season due to injuries.