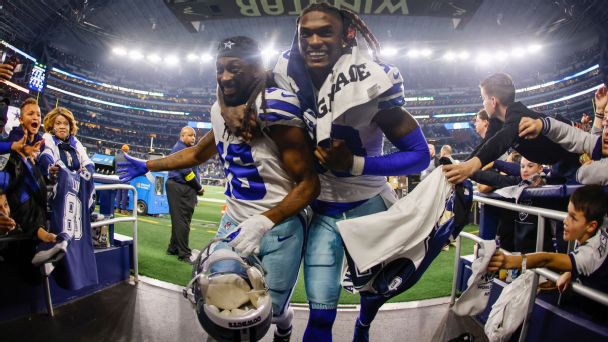 FRISCO, Texas — Even though the Dallas Cowboys clinched a playoff spot after their overtime loss to the Jacksonville Jaguars in Week 15, Mike McCarthy was fixated on 11 wins.To the coach, 11 wins establishes a team as a legitimate contender, whether as a division winner or as a wild card.“I think our place is clear,” McCarthy said after the Cowboys beat the Philadelphia Eagles 40-34 at AT&T Stadium on Christmas Eve to improve to 11-4.With two regular-season games remaining, the Cowboys can be no worse than the fifth seed in the NFC. If they win their last two games and the Eagles lose their last two, the Cowboys would repeat as NFC East champions, and they would claim the No. 1 seed if the Minnesota Vikings and San Francisco 49ers both lose one of their final two games.QB Dak Prescott isn’t worried about a division title at the moment.“I mean, we don’t necessarily control it, so for me it’s about worrying about what we can control,” he said. “That’s building momentum, stacking games on top of games, getting the confidence, getting everything we need to move forward that we feel like we’re hitting this stride as we hit the playoffs.“Hey, if they go and help us out and drop a couple of games, hell yeah, we’re going to take the title. That’s awesome. But we have no say-so in that at this point. All we can do is continue to win out and hope on that. And I’m not a guy that hopes on a lot of failure. Obviously I want the title and that would be great, but that’s just getting into distractions that don’t pay us anything forward.”The Dallas Cowboys’ Christmas Eve victory over the Philadelphia Eagles secured at least the No. 5 seed in the playoffs. AP Photo/Ron JenkinsBecause the Cowboys play Thursday (8:15 p.m. ET, Prime Video) against the reeling Tennessee Titans, they have no choice but to play to win. Imagine losing to the Titans and then seeing the Eagles lose to the New Orleans Saints on Sunday? They would kick themselves at missing out on an opportunity to become the first NFC East team to repeat as division champion since the 2003-04 Eagles.If the Eagles beat the Saints on Sunday, potentially the Cowboys could approach their final game against the Washington Commanders with the playoffs in mind. Since they would be locked into the No. 5 spot, health considerations could trump a potential 12th or 13th win.“It’s already playoff football at this point,” Prescott said.When the Cowboys lost in overtime on Nov. 13 at the Green Bay Packers, McCarthy said that was the type of game that would serve his team well in the playoffs. Close game. Each play mattered.Having beaten Philadelphia, the NFL’s best team at the moment, by overcoming two 10-point deficits and a third-and-30 when trailing by a touchdown midway through the fourth quarter, will help them even more.“I feel like when you’re really on that fight with adversity and you can overcome and see yourself on the positive side, like we did, it’s good confidence for the team,” Pro Bowl defensive end DeMarcus Lawrence said. “Especially headed into the playoffs. So I feel like he’s totally right. These close games, it’s going to be like this down the wire, and we’ve got to make sure we’re coming out on top.”The Cowboys have won games all sorts of ways this season.Simulate your own scenarios and check the latest playoff picture. Playoff Machine »• Full schedule » | Standings » | More »
They won four times with backup quarterback Cooper Rush while Prescott was out with a fractured thumb. They won with a stifling defense. They won with a dominating running game. They won on a last-second field goal. They won on a last-minute 98-yard drive. They won with a 33-point fourth-quarter explosion. They posted the most lopsided road win in franchise history at Minnesota (40-3).The Cowboys are the only team in the league with three wins against teams with at least 11 wins (Eagles, Vikings, Cincinnati Bengals). They also have five wins against teams with at least eight wins. No other team has more than three.A third meeting against the Eagles, in the playoffs, would be something.“I think both teams probably hope we see each other again because you know what that means,” McCarthy said. “This was a game we wanted to get and felt like we had to have, more for ourselves.”Which is why the win mattered more to the Cowboys even though star quarterback Jalen Hurts didn’t play for the Eagles because of a shoulder injury.“Very confident,” Prescott said. “Yeah, I mean, obviously being the third time, splitting one and one, very confident. It’s something we’ve talked about throughout the week, that we’ve got to come out here and put our best foot forward, represent who we are.”But at the same time, understand that this might be the first of two times here late in the year that we’re going to have to play these guys. I think that was a good win. It was a good win just for the team, a complementary win. I know, obviously, they’re going to think about that the next time we play them, and that’s what you want.”