Cowboys beat Eagles in dramatic game; we should all root for a playoff rematch 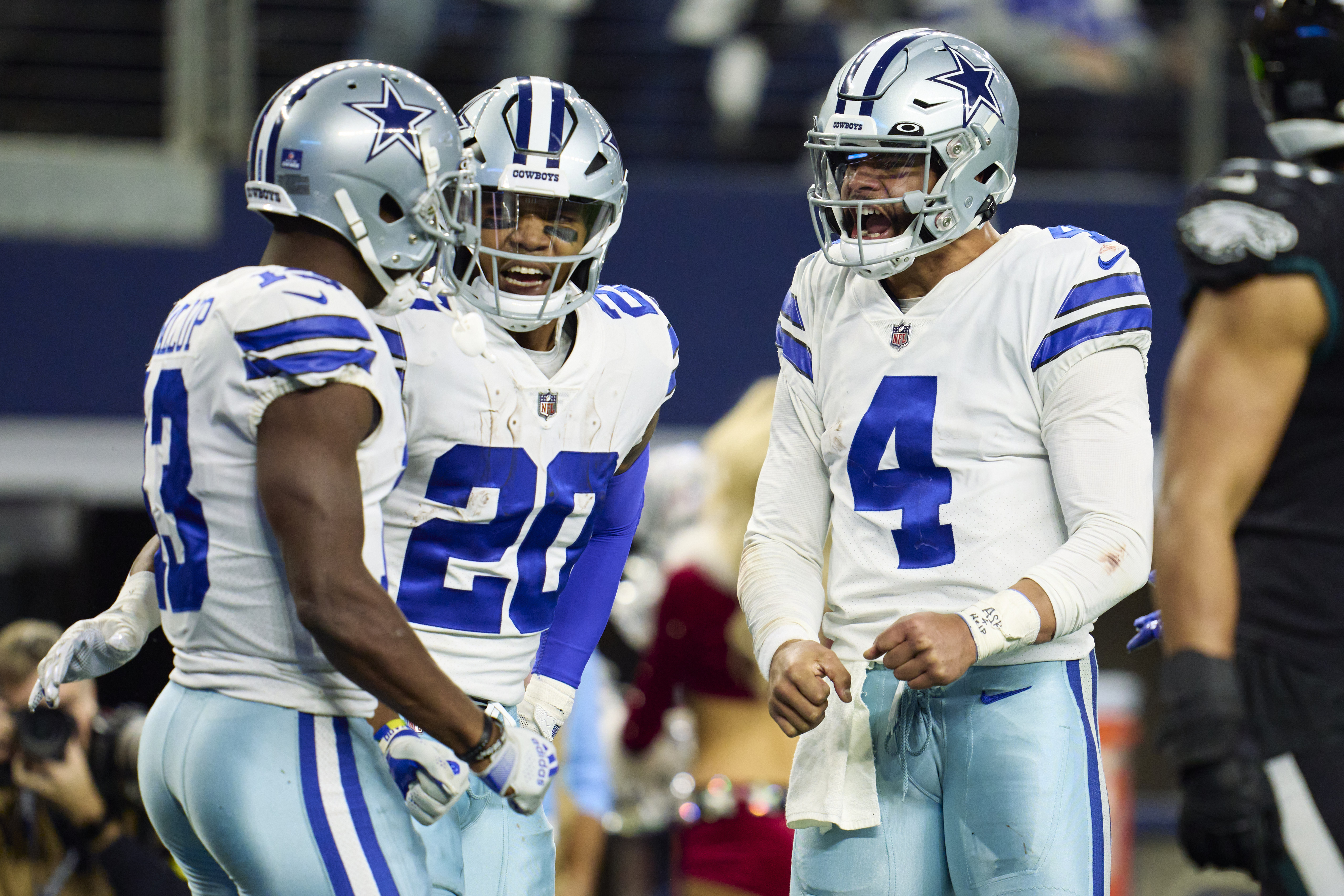 David Helman Dallas Cowboys Insider Let’s do this one more time — about a month from now, in the divisional round of the NFL playoffs, if possible. For a game that felt a bit like a dud headed in, that’s where things stand after the Cowboys’ thrilling 40-34 win to keep the NFC East race alive for at least one more week.Sure, the Eagles were without MVP candidate Jalen Hurts as the quarterback sat out with a sprained shoulder. The Dallas response would obviously be that the Cowboys were without Dak Prescott back in October when they lost 26-17 at Lincoln Financial Field.It’s only fitting, then, that these two teams have the opportunity to (hopefully) get healthier and settle the series in the postseason. If Saturday was any indicator, it’d be a doozy. As these two teams traded haymakers throughout a Christmas Eve classic, it was easy to forget the Eagles were without Hurts, or that the Cowboys had essentially fumbled away their chances of winning the division last week in Jacksonville. What took center stage instead were a pair of teams battling to measure up against their fiercest competition.Dak Prescott throws for three touchdowns as Cowboys edge Eagles in thriller
Dak Prescott brought his A-game as he threw for 347 yards and three TDs in the Dallas Cowboys’ victory over the Philadelphia Eagles.
Take your pick of any number of subplots. Dak Prescott will take precedence, and understandably so given the roller coaster he continues to ride this season. Prescott’s day took another detour early, as he misjudged the release of his third throw of the day and was intercepted by Josh Sweat — not just for a game-changing pick, but a pick-six that put the Cowboys in a 10-0 hole.”That’s just kind of been my luck here recently,” Prescott quipped afterward. Whereas Prescott’s pick-six against the Jaguars ended the game, this latest one instead kick-started one of his best performances of the season. From that miscue on, he couldn’t stand to miss. From there, he completed his next nine passes for 93 yards and a touchdown to guide his team to a 14-10 lead.For the day, he finished with a season-best 347 yards and three touchdowns, guiding the Cowboys to points on his final five possessions — not a bad day at the office for a guy whose day started in disastrous fashion. “I know the type of player I am, I know what I’m capable of,” Prescott said. “This team believes in me, and that’s all it is. Just keep my head down and keep playing.”He got a lot of help from his defense, who fought their way to a plus-three turnover differential. To be clear, the tape won’t be overly kind on Monday. With Gardner Minshew starting in place of Hurts, the Eagles piled up 442 yards of offense. Minshew threw for 355 yards and a pair of touchdowns, and — more importantly — converted 7-of-11 third downs as a passer, helping the Eagles to a 53% conversion rate on the night.And yet, the Cowboys managed to give Philadelphia the type of turnover issues that have rarely bothered them with Hurts as the starter. Minshew threw two contested interceptions over the middle of the field, and the Eagles lost two fumbles in the run game — both of which the Dallas defense pounced on to give their counterparts a short field.”They gave us chance after chance,” Prescott said. “When they do that, we’re a tough team to beat.”‘What are we going to do?’ – Micah Parsons on defense’s mindset in Cowboys’ victory
Micah Parsons spoke to Erin Andrews after a close victory over the Philadelphia Eagles. He talked about the game going down to the wire and squeaking out a win at home.
It’s hard to imagine the Eagles will sweat this one too much. Aside from the obvious disappointment of failing to sweep the Cowboys for the first time since 2011, they were playing with house money. Minshew played admirably in Hurts’ stead, and they still just need one win — or one Dallas loss, for that matter — to clinch the NFC East.Instead, the Cowboys will hope to focus on what this win can mean for their own momentum. They’re still just one week removed from a gut-wrenching loss in Jacksonville, one that exposed all their greatest flaws.One week later, they’ve managed a win against one of the league’s deepest rosters. And even if the Eagles were short-handed at quarterback, it’s unlikely Prescott and his offense will apologize for 419 yards and 40 points against one of the NFL’s best defenses. They’ll hope it’s a performance to build on heading into the final two weeks. And given the overwhelming likelihood that they’ll be the NFC’s No. 5 seed in the playoffs, it may serve them well in a postseason road trip to play the NFC South champion.And if that happens, you can connect the dots. There’s at least a decent chance the Cowboys and Eagles haven’t seen the last of each other this season. If this Christmas Eve game was any indicator, that’d be a bonus present for all of us.Top stories from FOX Sports:David Helman covers the Dallas Cowboys for FOX Sports. He previously spent nine seasons covering the Cowboys for the team’s official website. In 2018, he won a regional Emmy for his role in producing “Dak Prescott: A Family Reunion” about the quarterback’s time at Mississippi State. Follow him on Twitter @davidhelman_. Get more from National Football League Follow your favorites to get information about games, news and more