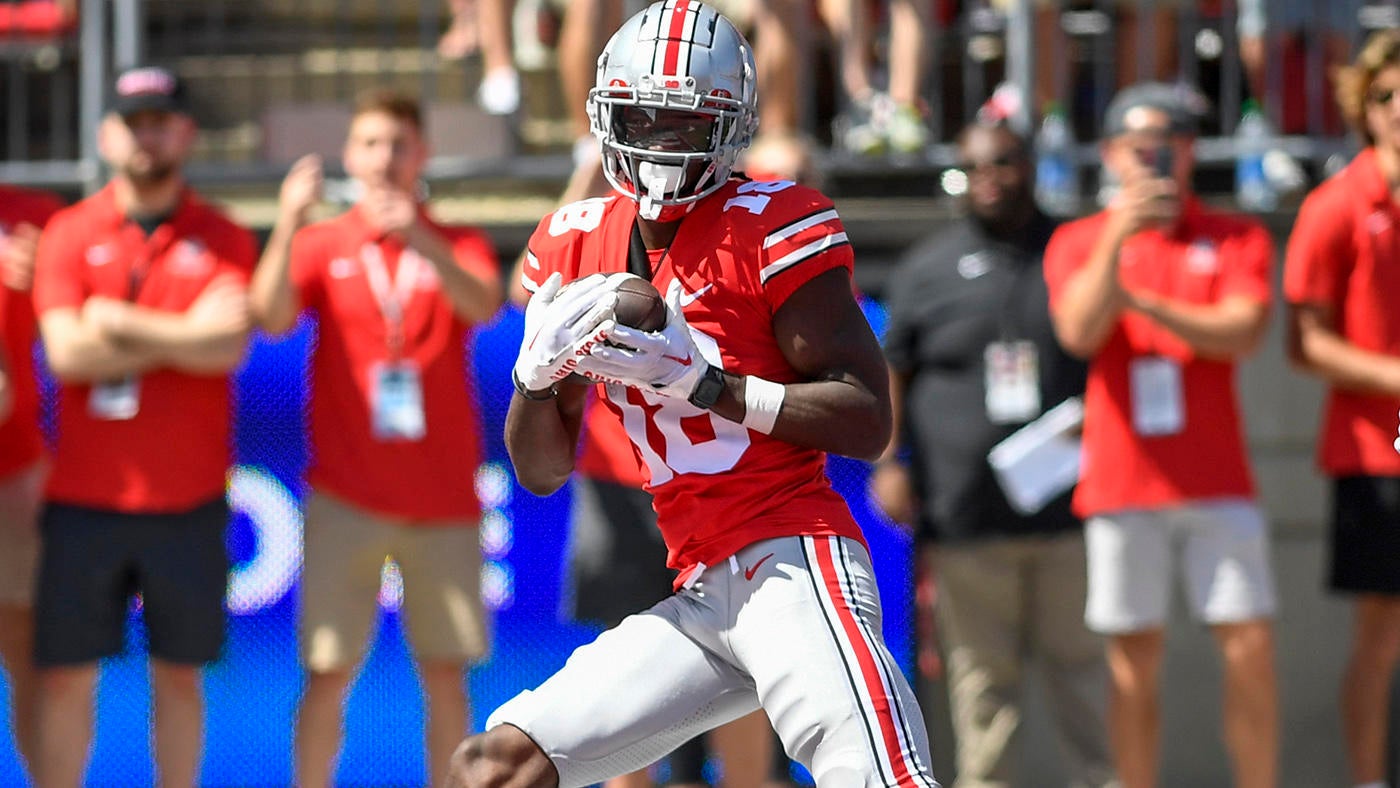 The College Football Playoff takes center stage on New Year’s Eve later this week with No. 1 Georgia battling No. 4 Ohio State in the Peach Bowl semifinal and No. 2 Michigan meeting No. 3 TCU in the Fiesta Bowl semifinal. As is usually the case, the four-team field features some of the best players in the nation. Three of this season’s Heisman Trophy finalists at quarterback find themselves among the list of this year’s top 20 impact players to watch from the CFP field: Ohio State’s C.J. Stroud, Georgia’s Stetson Bennett IV and TCU’s Max Duggan. Only one landed near the top, however. Plenty of award winners are represented in the 2022 College Football Playoff as well, including the Davey O’Brien Award (Duggan), John Mackey Award (Brock Bowers), Outland Trophy (Olusegun Oluwatimi), Thorpe Award (Tre’Vius Hodges-Tomlinson) and Burlsworth Trophy (Bennett). While this group of 20 players stands apart as the most impactful heading into Saturday’s semifinal games, plenty of others will join the list with strong performances on the biggest stage. Without further ado, here are the 20 most impactful players in the 2022 College Football Playoff field. McCarthy is fittingly the final name on this list because his resume is still somewhat of an enigma. The sophomore played the game of his life against Ohio State, completing three touchdown passes of more than 45 yards in a 45-23 victory. However, McCarthy also completed 12.4 passes per game and 52.1% of his passes over the final five games. What McCarthy will we get in the College Football Playoff?

Ringo takes a few chances, but the sophomore has a knack for making the big play. Last year, Ringo pulled off a pick six to clinch the national championship game. In a highly touted matchup against then-No. 1 Tennessee this season, Ringo picked off Hendon Hooker in the end zone to effectively end the game at halftime. Georgia could use some of his heroics against C.J. Stroud. Kelee Ringo was once again a force to be reckoned with for the undefeated Dawgs.
Getty Images
Miller isn’t the workhorse like other running backs in the College Football Playoff, but he is highly effective when called upon. The junior rushed for 1,342 yards and 17 touchdowns on 6.2 yards per attempt, and is one game away for tying LaDainian Tomlinson’s school record for consecutive games with a touchdown. Against Texas, Miller broke off a 75-yard touchdown run to outduel Bijan Robinson and beat the Longhorns. Miller is dynamic enough to keep offenses on their toes. 17. Georgia QB Stetson Bennett IVThe quarterback that was once just a feel-good story has transformed himself into a legitimate weapon. Bennett is completing more than 68% of his passes and rushed for more touchdowns in 2022 (7) than the first three years of his career (4). Offensive coordinator Todd Monken has found ways to make the game easy for Bennett, and the senior remains one of the nation’s most effective passers.

There’s some projection here, but Tuimoloau put together perhaps the best individual performance by a defender in college football this season. Against Penn State, Tuimoloau had three tackles for loss, two sacks, two interceptions, a fumble recovery and a touchdown. Few defenders in the playoff are capable of having that kind of individually devastating performance. Ohio State needs Tuimoloau to come up big. The Wolverines defense is structured differently in 2022 with Aidan Hutchinson and David Ojabo in the NFL. However, Morris is the one edge defender who ensures that opposing offenses still keep their eyes peeled. Morris posted 11 tackles for loss and 7.5 sacks as the top-graded member of the front seven on Michigan’s roster. He was credited with 35 pressures and 19 hurries. The only thing keeping him down the list: zero pressures against Ohio State. That won’t cut it against TCU. The difference between Ohio State’s 2021 and 2022 defenses arguably comes down to the dynamic Eichenberg, who emerged as a superstar with 112 tackles and 12 tackles for loss as the nose of Jim Knowles’ defense. Eichenberg excels as a run stopper and makes things difficult for opposing offenses with his nose for the football. Ohio State’s run defense against Georgia will impact whether the Buckeyes can stop UGA.

13. TCU CB Tre’Vius Hodges-TomlinsonHodges-Tomlinson ranks as the second Thorpe Award winner for TCU in the past three years after emerging as a dynamic cover corner for the Big 12 runners-up. Hodges-Tomlinson recorded a career-high three interceptions with 42 tackles as part of a strong corner unit with Josh Newton. If he can keep Michigan’s Ronnie Bell down in man coverage, it makes defending the Wolverines just a little easier. Georgia has a number of leaders on defense, but none is bigger than the fifth-year senior Smith on the back end. Smith transformed himself from a rotation starter into one of the nation’s best safeties in 2022 with 50 tackles, three interceptions and five passes defended for America’s No. 1 defense. Against a dynamic Ohio State squad, Smith has to keep the game in front of him and create difficult windows for Stroud. Few players in college football have transformed their reputations more fully than Avila in 2022. The DFW native was shuffled around the offensive line under the previous staff but finally found a home at left guard under Sonny Dykes. Next to center Alan Ali, Avila helped make the interior offensive line one of the strengths of the team and earned All-America honors. His versatility will be key against Michigan defensive tackle Mazi Smith.

10. Ohio State QB C.J. StroudStroud was named a Heisman finalist for the second straight season after throwing for more than 3,300 yards and ranking top five with 37 touchdown passes despite not playing in a conference title game. When Stroud is on point, he is one of the most dynamic and accurate passers in the sport today — at any level. His aerial destruction of Michigan State in 2021 remains a thing of beauty. However, Ohio State needs him to hit another level of individual excellence to have a chance against Georgia. 9. Michigan DL Mazi SmithHis numbers don’t jump off the page, but Smith’s efforts are critical to Michigan’s rushing defense ranking No. 3 in the nation — and ahead of Georgia in yards per carry. Smith lists at 337 pounds and plugs gaps against even the most physical of offensive linemen. His presence allows teammates to create havoc elsewhere. 8. Ohio State OL Paris JohnsonThe Buckeyes’ offensive line is one of the most underappreciated units on the roster, and Johnson ranks as the anchor. Johnson was a consensus top 10 national recruit who has played like it over 25 starts in an Ohio State uniform. At 6-foot-6 and 310 pounds, Johnson holds his own against even the most physical of edge rushers and has made Stroud one of the least sacked players in America despite playing a traditional drop-back passing game.

Edwards was the backup running back at Michigan until the regular-season finale. Since then, Edwards has been perhaps the most effective running back in the country. The sophomore posted 401 yards rushing and three touchdowns in wins over Ohio State and Purdue as Michigan rolled to a Big Ten title. In his best moments, Edwards is a complete running back who should be able to create opportunities behind a stout offensive line. 6. Georgia TE Brock BowersBowers has a case as the single-best player in college football after a sophomore season that will go down in the history books. Bowers caught 52 passes for 726 yards and six touchdowns, but that doesn’t tell the full story of how much offensive coordinator Todd Monken relies on Bowers as a pass catcher and blocker to create his game plans. Expect a heavy dose of Bowers and fellow tight end Darnell Washington against Ohio State in the Peach Bowl semifinal. Johnston’s numbers won’t jump off the page due to injuries, but he has a real case as the most talented wide receiver in America. At 6-foot-4 with freakish length and athleticism, Johnston is considered a likely first-round NFL Draft pick. Johnston posted 139 yards on four catches in the Big 12 Championship Game and almost singlehandedly beat Oklahoma State and Kansas with nearly 400 yards receiving across those two wins. When Johnston is on, TCU’s offense is nearly unstoppable.

Quentin Johnston emerged as one of the most dynamic receivers in the country this season.
Getty Images
Not many players from Georgia’s defense made the list simply because it’s a unit characterized by sensational teamwork. However, Carter is a force in the middle that destroys opposing game plans. Carter graded as the top defensive interior player in the Power Five and helped lead a Georgia run defense that finished No. 1 in the nation once more. Georgia doesn’t have very many irreplaceable players, but Carter is on the list. Consider this a unit award, but the Virginia transfer deserves special mention. Oluwatimi emerged as one of the top centers in college football in 2021 but captured the Rimington and Outland Trophies following a masterful senior season in Ann Arbor. When Heisman favorite Blake Corum went out with an injury, Oluwatimi’s offensive line unit stepped up to make the backup Edwards one of the nation’s most effective running backs. Michigan has been a run-dominant team, and Oluwatimi is the anchor. When Jaxon Smith-Njigba — the best receiver in the country — went out for the season, Ohio State simply replaced him with the other best receiver in the country. Harrison has been a revelation, catching 72 passes for 1,157 yards and 12 touchdowns for the Buckeyes. He posted six 100-yard receiving performances and was by far the most consistent source of offense against Michigan. Stroud is the name from Ohio State’s offense, but Harrison is the best player.

1. TCU QB Max DugganSimply put, no team in the College Football Playoff is more impacted by individual excellence than TCU with Duggan. His final regulation drive against Kansas State in the Big 12 title game earned Duggan a Heisman runner-up finish as the one-time backup posted 3,300 yards passing, 400 yards rushing and 36 total touchdowns. Duggan’s ability to spread the field with his arms and legs gives offensive coordinator Garrett Riley a unique ability to call any play anywhere on the field.