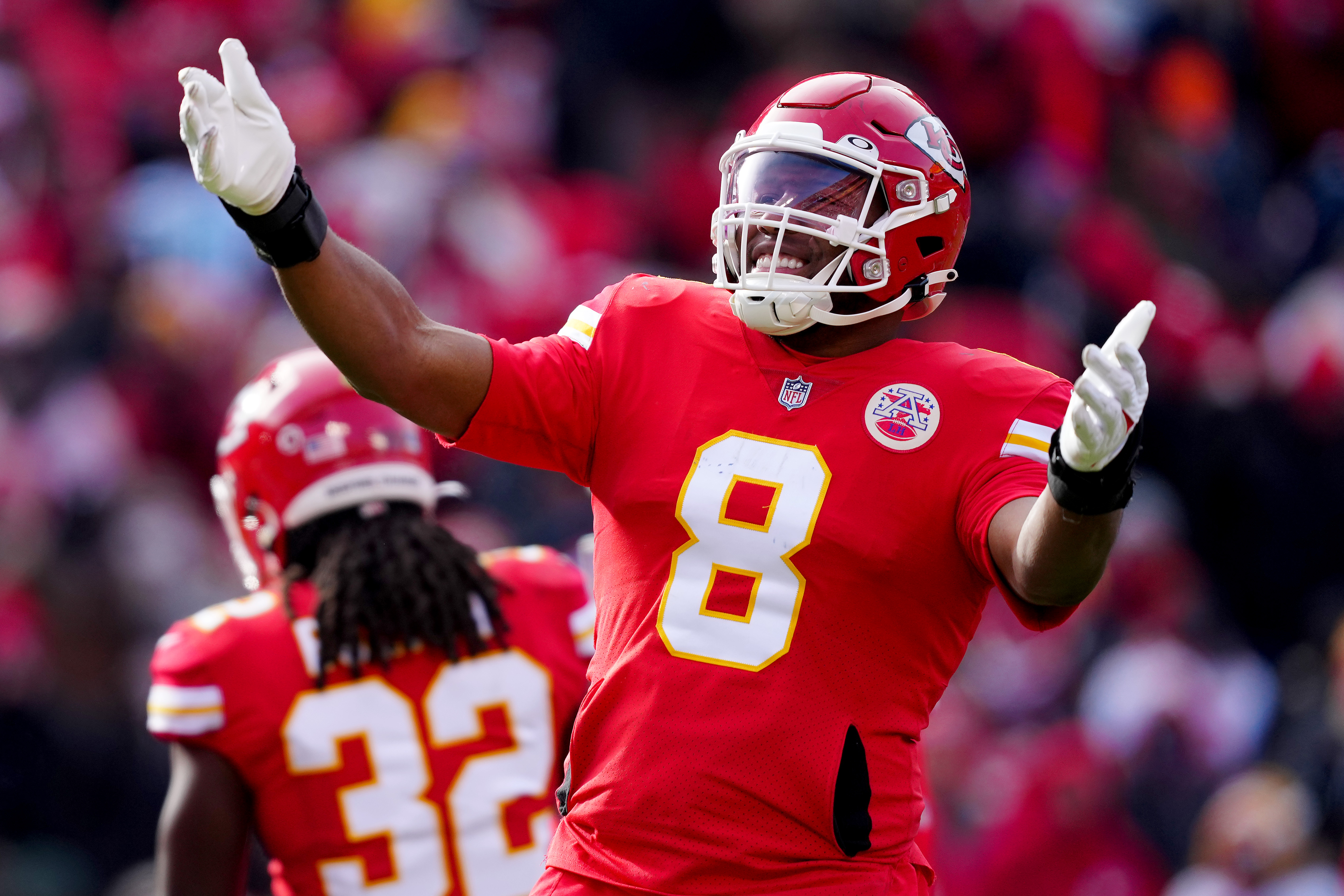 Eric Williams NFC West Reporter Now that the Kansas City Chiefs have clinched the AFC West for a seventh straight time, edge rusher Frank Clark believe bigger things are in store for his team.”Our goal is to win the conference,” Clark said. “We want to win the conference first, secure homefield advantage. And then we have fun throughout the playoffs and when we get to the big dance, we just crush them. That’s the goal here in Kansas City.”Clark’s Chiefs took another step toward achieving that goal by overpowering his former team, the Seattle Seahawks, 24-10 in the frigid cold of Arrowhead Stadium on Saturday.The Chiefs improved their record to 12-3 on the year — the team’s fifth straight season with at least 12 wins — as Kansas City tries to wrestle the top seed in the AFC playoffs away from Buffalo Bills (12-3), 35-13 winners over the Chicago Bears. The Bills own the No. 1 seed because of their win at Kansas City earlier this year. Seattle dropped to 7-8 on the year. The Seahawks have lost five of their last six games but still have a chance to reach the postseason with two games remaining.Patrick Mahomes did just enough offensively for the Chiefs, finishing 16-of-28 for 224 passing yards, with two touchdown passes and no interceptions. Mahomes also rushed for a 3-yard score.Travis Kelce led the Chiefs with six receptions for 113 yards. Also, for the first time in 11 games, Kansas City finished without a turnover.”Ball security ends up being important with how the defense was playing,” Chiefs head coach Andy Reid said. “The defense was playing well, so we didn’t force anything on the offensive side, although we were trying to score touchdowns. … But things weren’t clicking. If it wasn’t for the defense playing well, that could have been a real issue.”How bad was it for Geno Smith and Seattle’s offense? They did not get a first down on the team’s first four possessions and were held to 98 total yards in the first half as the Chiefs ran out to a 17-3 halftime lead. Linebacker Nick Bolton led the Chiefs with 17 combined tackles, eclipsing a franchise record held by Donnie Edwards with 10-plus tackles in eight games this season.Smith, who was voted into his first Pro Bowl this season, could not get anything going on offense. The West Virginia product finished 25-of 40 for 215 yards, with an 8-yard touchdown to tight end Noah Fant with the game already decided and an interception in the fourth quarter corralled by defensive back Juan Thornhill.Seattle’s Ken Walker III was effective running the football, finishing with 107 rushing yards on 26 carries. But the Seahawks struggled to get the ball into the end zone.Seattle went for it on fourth down three times inside Kansas City territory instead of kicking a field goal and failed to convert all three times. The Seahawks finished 2-of-14 on third down.Before the game, Seattle’s receiver warmed up shirtless in the freezing cold at Arrowhead.Kadarius Toney got into the end zone for Kansas City to open the scoring on a shovel pass from Patrick Mahomes for an 8-yard score. Mahomes then connected with Jerick McKinnon for a 9-yard reception, giving the Chiefs a 14-0 lead. Harrison Butker increased that advantage to 17-0 with a 47-yard field goal.The Seahawks finally got on the scoreboard at the end of the first half with a 22-yard field goal by Jason Myers, his 22nd straight made field goal. The big play of the drive was a Smith 35-yard completion to DK Metcalf, who led Seattle with seven receptions for 81 yards.Mahomes’ touchdown run and Fant’s touchdown reception completed the scoring in the second half.Top stories from FOX Sports:Eric D. Williams has reported on the NFL for more than a decade, covering the Los Angeles Rams for Sports Illustrated, the Los Angeles Chargers for ESPN and the Seattle Seahawks for the Tacoma News Tribune. Follow him on Twitter at @eric_d_williams.  Get more from National Football League Follow your favorites to get information about games, news and more