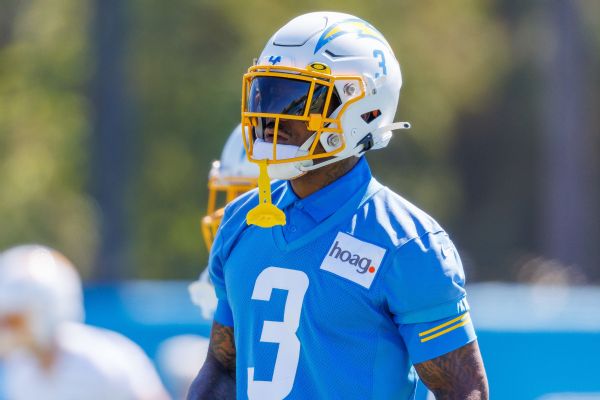 6:07 PM ETLindsey ThiryESPN Close Covered Rams for two years for Los Angeles Times
Previously covered the Falcons
Has covered the NBA and college football and basketballCOSTA MESA, Calif. — Los Angeles Chargers safety Derwin James Jr. said Friday that he will return from a quadriceps injury to play against the Indianapolis Colts in Week 16.”I’m feeling amazing, I’m feeling better,” James said. “I took some time to get it healed and just feeling better, a lot more confidence on it.”Despite playing the last two games without James, the defense has arguably hit its stride – holding the Miami Dolphins and Tennessee Titans to an average of 15.5 points in two straight victories.”Those guys are playing at a high level these last couple of weeks,” said James, who earlier this week was named to a third Pro Bowl. “A lot of confidence. I’m just trying to be there to help and bring that energy and experience. Help us get where we want to go.”With the back-to-back wins, the Chargers have jumped to the No. 6 seed in the AFC playoff picture as they pursuit their first postseason appearance since 2018.Playing on Monday Night Football, the Bolts will face a 4-9-1 Colts team that will start quarterback Nick Foles in place of Matt Ryan, who has been benched.James said his quad injury initially became an issue ahead of a Week 12 win over the Arizona Cardinals, however he played through it and also play in a Week 13 loss to the Las Vegas Raiders.”I was dealing with it before the Arizona game, kind of tight, had a strain in my quad and I kind of played through it and it got a little worse throughout it,” James said. “Now it’s better. I sat out and rested it and it got better and I feel better.”James has 106 tackles, four sacks, four pass deflections, an interception and two forced fumbles.