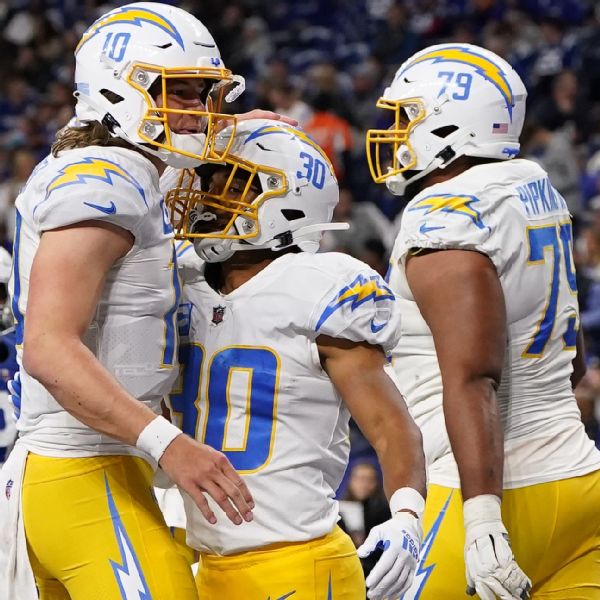 11:09 PM ETLindsey ThiryESPN Close Covered Rams for two years for Los Angeles Times
Previously covered the Falcons
Has covered the NBA and college football and basketballThe Los Angeles Chargers will return to the postseason for the first time since 2018 after earning a playoff berth Monday with a 20-3 victory over the Indianapolis Colts at Lucas Oil Stadium.The Chargers entered Week 16 with a direct path to the postseason after jumping into the No. 6 seed last Sunday with a win over the Tennessee Titans, however, their berth came earlier than perhaps expected after the New York Jets, New England Patriots and Las Vegas Raiders each fell in their weekend matchups.”It means a lot for our team,” quarterback Justin Herbert said on the field after the win, in an interview with ESPN’s Lisa Salters. “We’ve been through a lot this year as a team. For the guys to battle, and keep fighting the way they have, it’s been great to see.”Second-year coach Brandon Staley concurred.”All three phases of the game. We came here to dominate and that’s what we did,” Staley told his team in the victorious locker room. “Your toughness has gotten us to this point. And that was the point of this since the beginning.”It will be the first postseason appearance for Staley and Herbert, who is in his third year. He completed 24 of 31 passes for 235 yards with an interception in the victory.”There’s a lot of room for improvement,” Herbert said. “We can get better. We left a lot out there. But the story tonight was the defense.”At the outset of the season, the Bolts were among favorites to not only earn a playoff trip, but make a deep run, after bolstering their defense.2 RelatedA blockbuster trade with the Chicago Bears brought pass rusher Khalil Mack to L.A. and the Bolts signed cornerback J.C. Jackson to a five-years, $82.5 million deal in free agency, while also loading up their defensive line with Austin Johnson and Sebastian Joseph-Day.However, the Chargers teetered through a 5-5 start, as several significant players dealt with injuries.Herbert played several weeks through fractured rib cartilage that he suffered in Week 2, and was without wide receivers Keenan Allen and Mike Williams, who dealt with a hamstring strain and high ankle sprain, respectively, for significant time. Allen and Williams did not play a complete game together until Week 14. The offensive line also lost left tackle Rashawn Slater to injured reserve after Week 3.On defense, the Bolts lost edge rusher Joey Bosa, Jackson, and Johnson to injured reserve.Bosa could still return, but the unit is otherwise hitting its stride.”I’m so proud of all you guys,” owner Dean Spanos said in the locker room. “I know we’ve got a little ways to go.”The Chargers held Colts quarterback Nick Foles to 17-of-29 passes for 143 yards with three interceptions, while sacking Foles seven times. The Colts were 0-for-10 on third down.The Chargers will take on the Los Angeles Rams on Sunday in what will be a home game for Herbert and Co.”Limit penalties, limit turnovers, and I have to be smarter with the ball and that starts with me,” Herbert said about what the Chargers need to focus on headed into the postseason. “We have to finish in the red zone. So, there’s plenty of room for improvement, and we have opportunities to get better.”