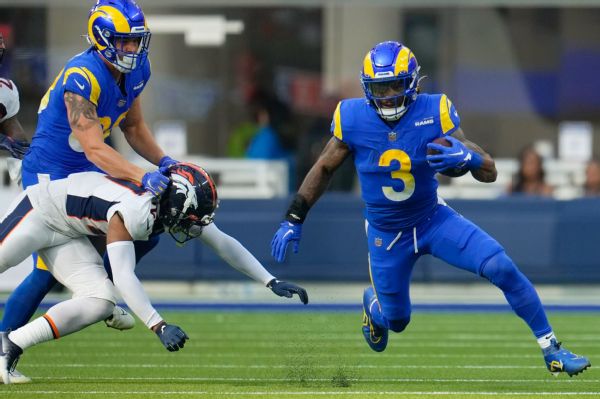 LOS ANGELES — Although the Los Angeles Rams attempted to trade Cam Akers before the Nov. 1 trade deadline, coach Sean McVay said it would be “silly” for the running back not to be a “big part” of the offense moving forward.Akers spent nearly a month away from the team in the middle of the season while the Rams were exploring finding Akers “a fresh new start with another team.” The Rams ultimately did not trade the running back, and he rejoined the team after the trade deadline.Akers had three rushing touchdowns Sunday against the Denver Broncos, giving him an NFL-leading six rushing touchdowns in December. Akers had just three rushing touchdowns in his first 23 career games combined.”With what he’s done continuing to build on that momentum, I think it’d be silly based on what a great job he’s done to think of it anything differently than him being a big part of what you want to be able to do moving forward,” McVay said. “But you just take it a day at a time. But that certainly … is something that we’ve worked through and there’s totally a different trajectory in terms of what he’s done and the way that he’s handled himself and the way that he’s playing like we know he’s capable of.1 Related”And hopefully just continue to see him build on it these last couple weeks and into next year for the Rams.”Along with his three rushing touchdowns Sunday, Akers ran for 118 yards on 23 carries and had two catches for 29 yards. He is the first Rams running back with 100 rushing yards and multiple rushing touchdowns in a game since Todd Gurley did it in Week 13 of the 2018 season, according to ESPN Stats & Information research. It was also the second 100-yard rushing game of his career.Akers, who was a second-round pick for the Rams in 2020, will enter the final year of his rookie contract in 2023. Akers said last week that he wants to be in Los Angeles next season.Rams right tackle Rob Havenstein said he has seen Akers’ mindset of “going out there and truly improving every single day” since he returned to the team.”It’s something that you saw in practice, so guys aren’t surprised by the way Cam’s kind of gone out there and done his thing,” Havenstein said Monday. “It speaks volumes to the mental toughness and the competitiveness that Cam has.”McVay said Monday that Akers didn’t have to show the team anything after his return but simply needed to “consistently just go about [his] business and good things will happen because of the ability and the talent that he has. And that’s what we’re seeing.”McVay was critical of Akers early in the season, saying he wanted to see “an increased level of urgency and accountability snap in and snap out from” the running back. Akers had just three carries for zero yards in the season opener, something he said later that he wasn’t expecting.”I think he’s just gone about his business the right way,” McVay said Monday. “Really attacked every single day. Like I mentioned yesterday, I think he deserves a ton of credit. … And it was great to be able to see Cam play the way that we know he is capable of.”… I think it says a lot about him for him to be able to kind of go through the things that he’s gone through individually this year, and to be where he’s at and continuing to play the way that he’s played, is a real credit to him.”In 13 games this season, Akers has 559 yards and seven touchdowns on 148 carries.