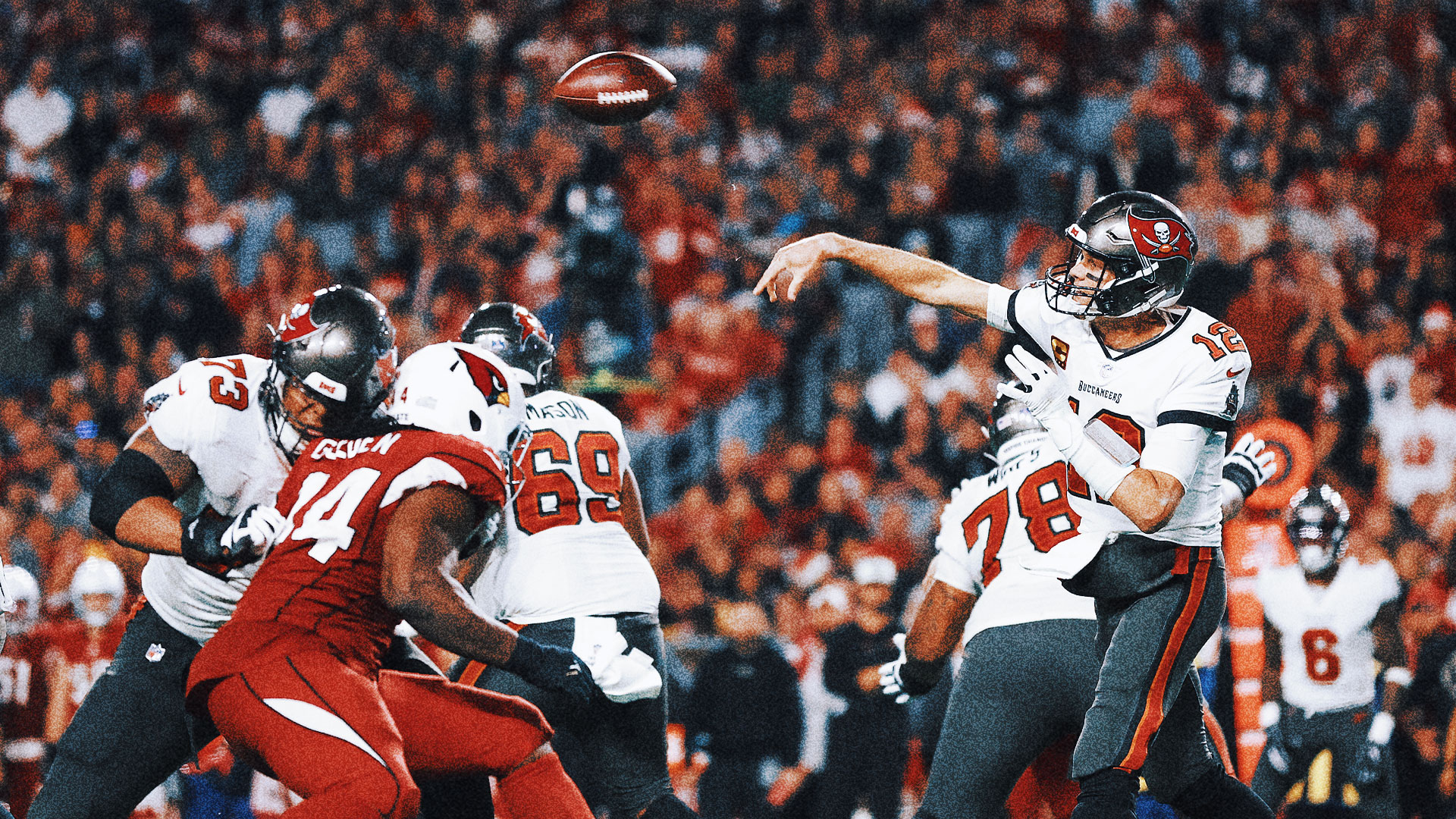 Greg Auman NFC South Reporter Down 10 points in the fourth quarter, Tom Brady rallied the Buccaneers to force overtime, then finished the comeback with a drive to set up Ryan Succop’s 40-yard field goal and a 19-16 comeback win over the Arizona Cardinals on Christmas.Brady completed six straight passes for 69 yards in overtime to get to the 19-yard line, and Succop’s kick gave the Bucs a win in a game where their offense had done very little entering the fourth quarter. Brady finished with 281 yards.The Bucs (7-8) have set themselves up well, such that a win at home against Carolina next week would clinch the NFC South title. Had they lost Sunday, the Panthers could have eliminated the Bucs with a win in Tampa. Down 16-6 in the fourth quarter, the Bucs offense woke up, with Leonard Fournette taking a screen pass for a 44-yard gain. Brady went 6-for-7 for 67 yards on the drive, ending in on third-and-goal with a 3-yard touchdown pass to rookie running back Rachaad White to get within three points.Then the Cardinals fumbled on an option pitch, with Bucs defensive lineman Will Gholston jumping on the loose ball. That set up another Succop field goal to tie the game at 16 with 2:27 remaining.The Bucs defense held Arizona’s offense in check for most of the night, but a 47-yard pass from Trace McSorley to receiver Hollywood Brown set up a 39-yard Matt Prater field goal to give the Cardinals their first lead at 9-6 with 14:07 left.That drive started after Brady’s second interception of the game, both by Arizona’s Marco Wilson. Brady had just three interceptions in the first 12 games of this season, but now has two each in the last three games, giving him nine on the year.The two teams struggled offensively on the way to a 6-6 tie at halftime, with Arizona getting a 53-yard field goal from Prater just before the half to tie the game.The Bucs got 48 yards on their first two plays — a pass interference flag and an 18-yard White run — but that drive stalled at the Arizona 20, leading to a field goal. The Bucs defense answered with a turnover, as outside linebacker Anthony Nelson sacked McSorley and forced a fumble that linebacker Devin White recovered for the Bucs. That turnover didn’t yield as any points, as the Bucs went for it on fourth-and-1 at the Arizona 48 and Fournette was stopped short for a turnover on downs. A 56-yard field goal by Prater tied the game at 3-3, and another Bucs drive stalled in the red zone, with a touchdown negated by an illegal shift penalty, followed by a hold, setting up another Ryan Succop field goal. Brady struggled to move the chains with any consistency, with another drive ending with an interception when he threw as he was getting hit.Brady was just 12-for-20 for 87 yards in the first half, five of those completions on dumpoffs to Fournette. McSorley, making his first NFL start after injuries to Kyler Murray and backup Colt McCoy, was 10-for-21 for 79 yards.Top stories from FOX Sports:Greg Auman is FOX Sports’ NFC South reporter, covering the Buccaneers, Falcons, Panthers and Saints. He is in his 10th season covering the Bucs and the NFL full-time, having spent time at the Tampa Bay Times and The Athletic. You can follow him on Twitter at @gregauman. Get more from National Football League Follow your favorites to get information about games, news and more