Broncos get blown out by Rams; Russell Wilson throws 3 INTs 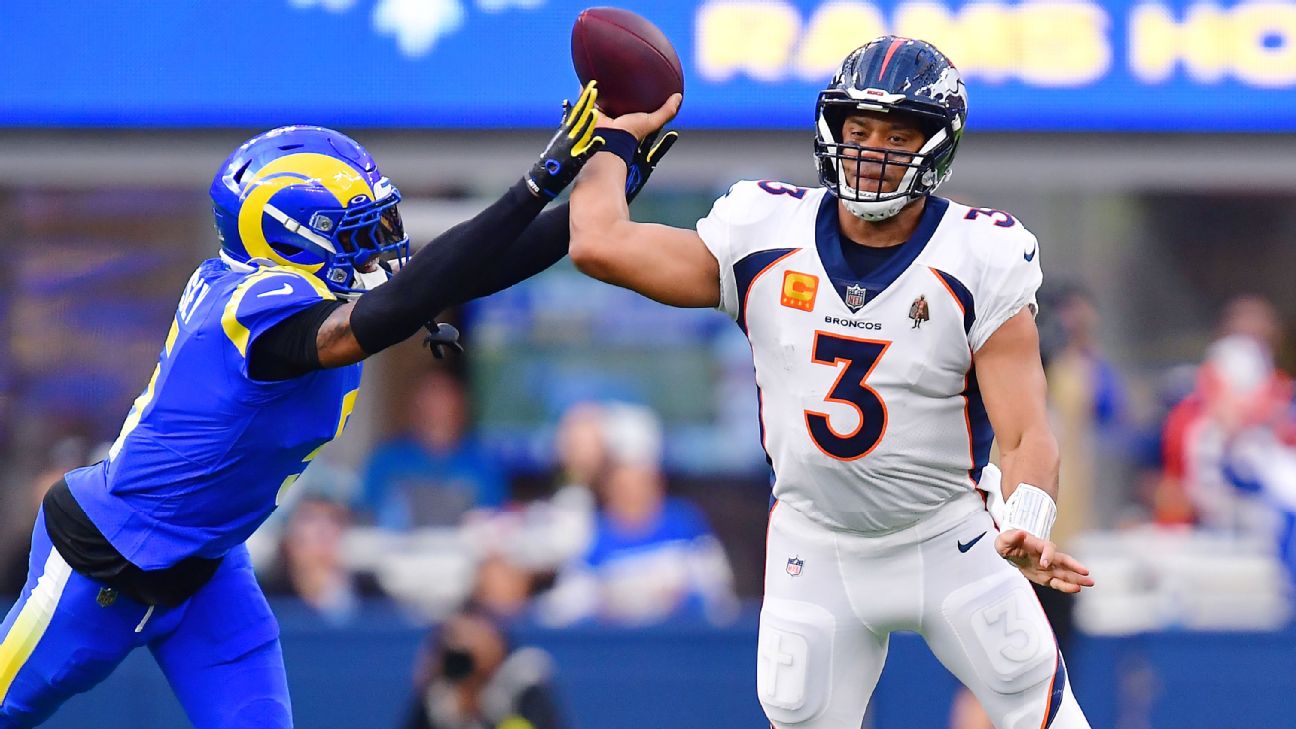 7:39 PM ETSarah BarshopCloseESPN Staff WriterCovered the Packers for ESPN Milwaukee
Marquette University graduateJeff LegwoldCloseESPN Senior Writer Covered Broncos for nine years for Denver Post and Rocky Mountain News
Previously covered Steelers, Bills and Titans
Member of Pro Football Hall of Fame Boardof Selectors since 1999INGLEWOOD, Calif. — The Los Angeles Rams (5-10) nabbed one of their easiest wins of the season on Christmas Day, as Russell Wilson and the Denver Broncos (4-11) suffered an embarrassing 51-14 loss on the road.Wilson was sacked six times and threw three interceptions in the game, finding the end zone just once on a fourth-quarter touchdown throw to tight end Greg Dulcich.Rams running back Cam Akers scored three touchdowns to highlight a breakout day from him and the rest of L.A.’s offense.Gary A. Vasquez/USA TODAY SportsDenver BroncosIt took 15 games in a lost season, but the Broncos finally felt the roof cave in during a Christmas Day disaster. Nathaniel Hackett and his staff had everything going wrong at the worst time.An embattled Hackett saw his team put in the kind of effort that will significantly impact whatever the discussion is about his future. The effort was so lacking in planning and execution that it likely shattered any momentum Hackett had cobbled together in recent weeks. The Broncos committed silly penalties — led by Randy Gregory’s inexplicable personal foul in the fourth quarter — and tempers flared on the sideline.Describe the game in two words: Go figure. Plenty of things happened after the game’s first play, but it took the Broncos only one play to show they still have not learned patience on offense.Things go better when they take easy completions, move the ball and finish drives. Yet, the first play Sunday was Wilson heaving it up the sideline to a well-covered Courtland Sutton. A 1-yard run and incompletion later saw the Broncos punting for the first time — a preview of how the rest of the day would go.Biggest hole in the game plan: The Broncos’ injuries are not an excuse, but they can’t be ignored. Since Justin Simmons went on injured reserve in Week 2, the Broncos have had 21 different players go on injured reserve.The offensive line has been compromised more than most positions, yet Hackett and the team’s offensive coaches continue to call plays for the team they wish were on the field instead of the one that actually is on the field. They had a bevy of three-wide sets Sunday that the Rams’ defensive front gladly powered through at times. The Broncos have been at their best in two-tight-end sets, but a national audience didn’t get to see them show it.QB breakdown: Wilson has some honest reflection to do in the offseason, and his ability to bounce back from a difficult year will hinge on his willingness to do it. His two interceptions on his first three pass attempts were each what-were-you-thinking throws that resulted in turnovers deep in Broncos territory. The Broncos never recovered from momentum-crushing plays like his third interception of the game. — Jeff LegwoldNext game: at Kansas City Chiefs (Jan. 1, 1 p.m. ET)AP Photo/Jae C. HongLos Angeles RamsIn what was a well-rounded performance for the Rams’ offense, tight end Tyler Higbee had by far his best game of the season, with nine catches for 94 yards and two touchdowns. Higbee, who also caught a touchdown on Monday in Green Bay, had not scored in Los Angeles’ first 13 games of the season. Higbee’s three touchdowns in two games came with Baker Mayfield at quarterback. Mayfield has thrown 39 touchdowns to tight ends since entering the NFL and is tied for second among quarterbacks in that span, according to ESPN Stats & Information.QB breakdown: Mayfield had the best game of his short Rams career, completing 24 of 28 passes for 230 yards and two touchdowns. He didn’t throw an interception. He led a Rams offense that scored on all but one offensive possession and tallied a season-high 51 points. Mayfield’s 85.7% completion rate was the second-highest mark in a game in his career.Simulate your own scenarios and check the latest playoff picture. Playoff Machine »• Full schedule » | Standings » | More »
Promising trend: This is the Cam Akers the Rams were hoping for when he came back from his Achilles injury. After spending nearly a month away from the team while Los Angeles tried to find him a new home, Akers has finished the end of the season strong, with five touchdowns in his past four games. Akers had 147 total yards on Sunday against the Broncos: 118 rushing yards on 23 carries and three touchdowns, and two catches for 29 yards. Akers finishes December with six rushing touchdowns, the most in the NFL this month. He had three rushing touchdowns in his first 23 career games combined.Promising trend II: Complementary football. The Rams scored two touchdowns off takeaways in the first quarter. Entering the game, they’d done that only once this season. Although the offense had several short fields, it still did it against an excellent Broncos defense that entered the game allowing an average of 18.1 points per game, the third fewest in the league. The Rams scored 17 points in the first quarter. According to ESPN Stats & Information, this was the first time the Broncos have allowed more than seven points in the first quarter this season and only the fourth time the Broncos have allowed points on a team’s opening drive. — Sarah BarshopNext game: at Los Angeles Chargers (Jan. 1, 4:25 p.m. ET)