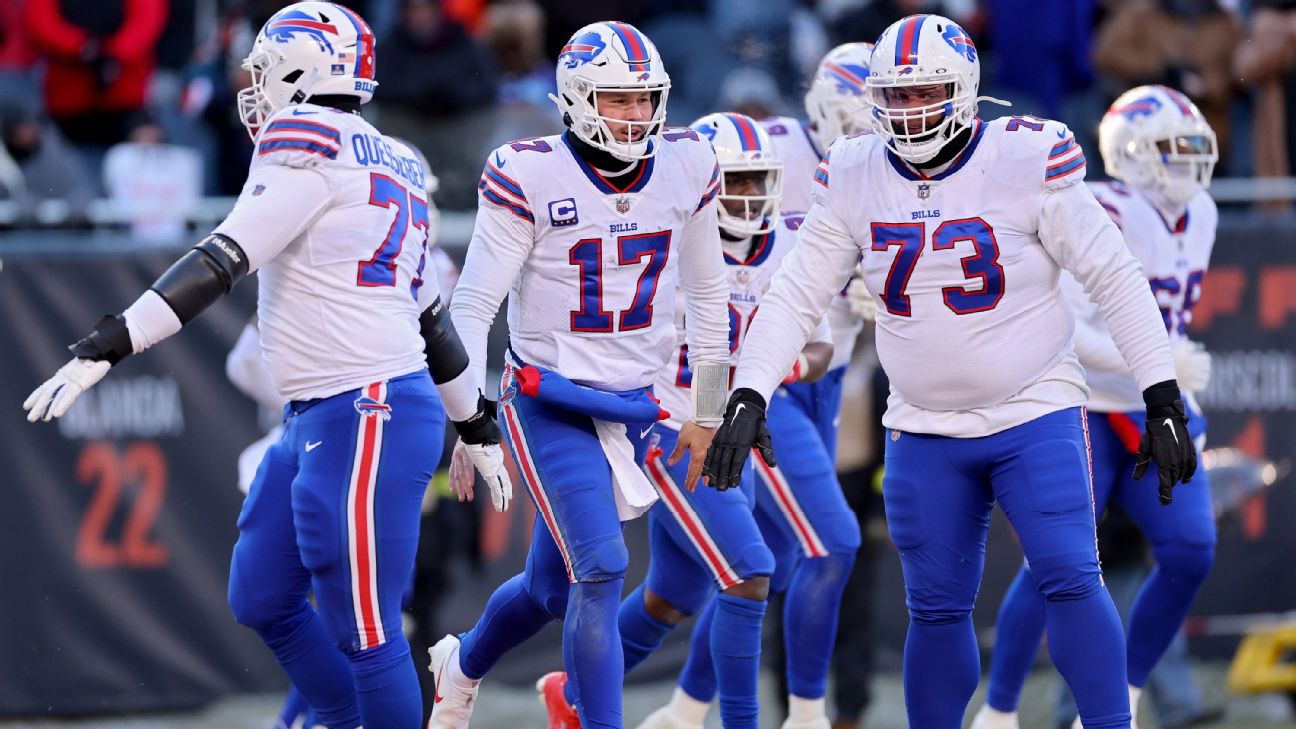 4:13 PM ETAlaina GetzenbergESPN CHICAGO — The signs in the Buffalo Bills’ facility began to shift from “Playoff Caliber” to “Championship Caliber” this week.Against the Chicago Bears, the Bills took it a step forward and clinched the division, adding a much-needed layer of clothing in freezing Chicago in the form of AFC East Champions T-shirts and hats with a 35-13 victory that wasn’t as pretty as the score may indicate. The win improved the Bills to 12-3 and stretches the team’s winning streak to six games.This is the Bills’ third straight AFC East title after winning zero division titles from 1996-2019.The Bills clinched the AFC East with two weeks remaining, and if they win out to end the season — at the Cincinnati Bengals and vs. the New England Patriots — the AFC playoffs will go through Buffalo, New York. The team came into the weekend as the betting favorites to the win the Super Bowl, per Caesars Sportsbook.With the win, the Bills now have a 63% chance to secure the No. 1 seed in the AFC, per ESPN Analytics. Attaining home-field advantage would be big for this team, especially considering Buffalo has won all three of its home playoff games over the last two seasons.The defense played a significant role in the win, limiting the Bears’ league-leading rushing offense to 80 yards and 2.8 yards per carry. No Chicago drive was longer the 53 yards and after a game-opening touchdown drive by the Bears, the Bills limited Chicago to two field goals on the drives that started in Bears territory.The Bills running game saved the offense with 102 rushing yards in the third quarter, the team’s most in a single quarter since 2020 against the Broncos (110). The team finished with a season-high rushing total (254) and rushing touchdowns by Devin Singletary, James Cook and quarterback Josh Allen.Allen, however, made some questionable decisions in the game with two interceptions, his fifth multi-interception game of the season, tied with his rookie year (2018) for the most in his career. He finished completing 15-of-26 passes for 159 yards, two passing touchdowns, one rushing touchdown and the two picks. Allen also ran for 41 yards on six carries.But against Chicago, the mistakes didn’t make a big dent with the defense and rushing offense, despite being without starting center Mitch Morse, rising to the occasion.