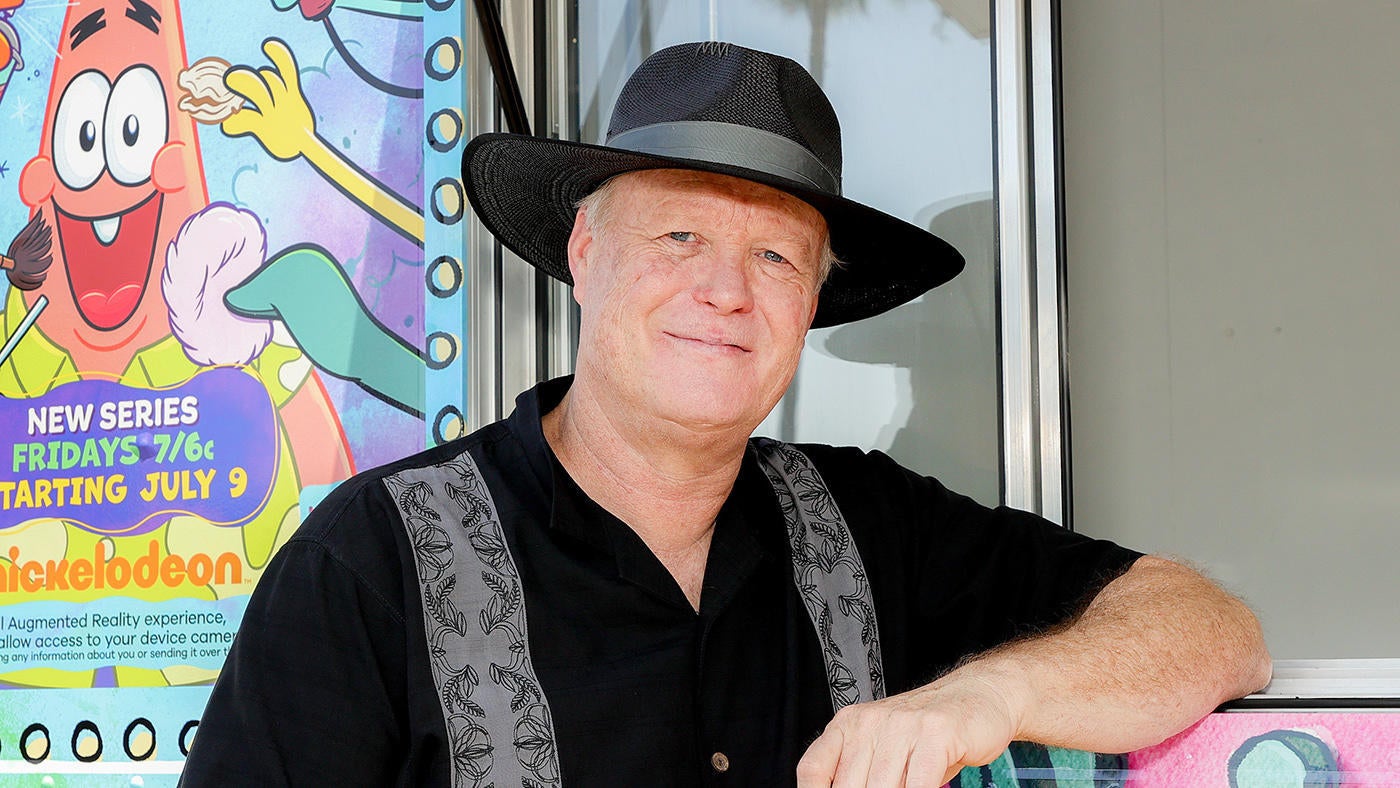 Professional goofball. This is the only way Bill Fagerbakke knows how to describe himself when he explains what he does for a living, and enjoys every second of playing one of the most beloved characters in television. Fagerbakke has spent two decades making generations of fans laugh as the voice of SpongeBob SquarePants’ best friend and partner in chaos, Patrick Star. Even Fagerbakke can take on a new challenge, especially if it’s with the character he’s provided the voice for over the past 22 years. Come Christmas Day, Fagerbakke and “Patrick” will be in a new element. Patrick will be providing live commentary for the third Nickelodeon NFL game, the first to be held in the regular season. He’ll be joining Noah Engle, Nate Burleson, Gabrielle Nevaeh Green and Young Dylan, live from Bikini Bottom as the newest addition to the popular Nickelodeon broadcast (Sunday, Dec. 25, 4:30 p.m. ET). “To be a part of this, it’s kind of terrifying,” Fagerbakke said to CBS Sports in preparation for the game. “We don’t know what’s gonna happen. I just have to trust in Patrick. Let him take over and he will bring a passel of material and awareness of what is happening. And I’ll just try to stay out of the way of Nate Burleson, Noah Eagle, Gabrielle Nevaeh Green — who are all wonderful and capture the right spirit the broadcast needs.

“I don’t want to get in their way and contribute whatever they need.” Patrick Star has been a sensation in the SpongeBob universe. From the many quotable lines (“Is mayonnaise an instrument” and “I can’t see my forehead” to name a few) to all the memorable scenes, Fagerbakke has made dozens of generations laugh with his portrayal of the character. Through the years, he still laughs when fans bring up Patrick to him or ask him to repeat one of his many memorable lines. “Patrick still makes me laugh,” Fagerbakke said with a huge smile on his face. “You don’t understand how extraordinary it is to be doing something for over 22 years and he still can make you laugh. I’m just so delighted and fortunate.

“I’ve heard many lines I forgot I’ve said 10 years ago! I would go to myself, ‘OK what happened in that episode again, especially the one where I said I can’t see my forehead.’ One time I had a moment where someone wanted me to say ‘it’s not my wallet’ and I have forgotten about that line!”I had to watch that episode again. It’s so great.”While Patrick is his most memorable character, Fagerbakke spent nine seasons playing the beloved Dauber on “Coach” (in case one would wonder what Patrick knows about football). Prior to his acting career, Fagerbakke actually played college football at the University of Idaho before a knee injury ended his playing career. As a football lifer, being a part of a broadcast featuring Los Angeles Rams (who play the Denver Broncos in the Nickelodeon game) makes the game even more special.

“I’ve been a football fan since 1969 when the Los Angeles Rams won their first 11 games with Roman Gabriel, Merlin Olsen, Deacon Jones, Jack Snow and all those guys,” Fagerbakke said. “I became hooked then and obviously I got to play through junior high and high school and a couple years of college.”I love [the game]. I think it’s the ultimate team game and I really appreciate the careers of these professional players.”Will Fagerbakke use his “Coach” and playing expertise and morph it into Patrick? Let’s not get carried away here.

“In my career as a professional goofball — which is what I’ve been able to enjoy — you can say my nine years of ‘Coach’ was preparation for Patrick,” Fagerbakke said with a laugh. “In the world of Bikini Bottom, I’m not sure if we would benefit from an outside reality, but that’s the interesting thing, right? How much do I sustain that? I don’t know, but that’s gonna be the fun part.”Maybe they should give me a shock collar or something in case I say something they don’t wanna hear, they can just press the button.” Patrick’s role in the broadcast is the biggest mystery of the Nickelodeon game, from where he will be throughout the broadcast to what he is actually going to do once the game starts. Playing Patrick in the Nickelodeon game wasn’t something Fagerbakke sought out, making the experience even more worthwhile.

“I’m not that smart to think of that,” Fagerbakke said as he laughed. “I’m nothing but delighted at this prospect. Every football fan — don’t you think — has some degree on how they would do as an announcer? They wish they could be in that booth and say what they thought was going on.”I actually get to participate in a very dramatically specific way that’s nothing like an announcer — but just being part of the party!”Fagerbakke has made a life entertaining people of all ages — and wants to do the same come Sunday. The “professional goofball” role will stick, even as he laughed when he was told he plays “the dumbest guy in Bikini Bottom.”

“Maybe that can be a little sign on his rock — Home of the dumbest guy in town!” Fagerbakke laughed. “One never anticipates what I’ve been able to be a part of and the way it’s resonated with people. Just look at your generation and sharing it with your kids.”I love every minute of this show. It’s such a delight.”