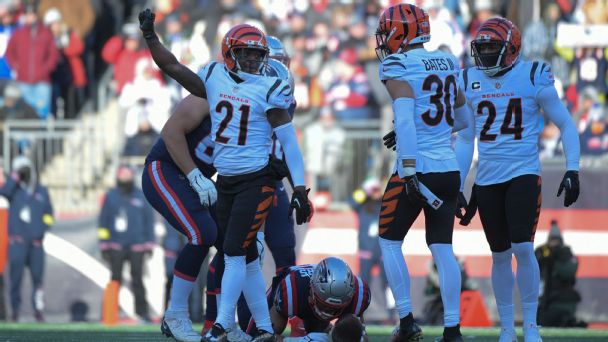 FOXBOROUGH, Mass. — Cincinnati Bengals quarterback Joe Burrow wasn’t going to apologize for a win. He wasn’t interested in silver linings, either.In last Saturday’s 22-18 victory over the New England Patriots, the Bengals needed two late stops, including a forced fumble inside their own 10-yard line, to avoid a major collapseIt was the type of game that shows a team’s championship mettle. But Burrow had another interpretation that reflected Cincinnati’s ambitions.“I would also say that teams that want to win a Super Bowl put them away a little earlier,” Burrow said after the game.• Inside Chargers’ team dinners• How Matt Ryan’s season fell apart• Cowboys confident as contenders• Bills enjoy best rushing day in 6 years• Playoff picture: Clinching scenarios
Cincinnati watched a 22-0 halftime lead dwindle in the second half as the Patriots forced turnovers, converted on third downs and had big plays go their way. The Bengals (11-4), who dominated play in the first half, were at risk of blowing their biggest lead since 1979 (against the Houston Oilers).That was averted when safety Vonn Bell jarred the ball loose from Patriots running back Rhamondre Stevenson just a few yards away from a potential game-winning touchdown. It allowed the Bengals to stretch their winning streak to seven games, maintain a one-game lead over the Baltimore Ravens in the AFC North standings and stay within striking distance of a No. 1 playoff seed.“That was a stressful situation,” Burrow said. “Obviously we feel like we shouldn’t have been in that situation if we take care of business. But we made the play when it counts.”The ending was reminiscent of last year’s AFC wild-card victory against the Las Vegas Raiders, the team’s first playoff win in 31 seasons. In that game, linebacker Germaine Pratt intercepted a pass on fourth-and-goal at Cincinnati’s 2-yard line to seal the 26-19 victory.Vonn Bell, left, made the key play in the Bengals’ win over the Patriots on Saturday. Photo by Erica Denhoff/Icon SportswireBut the rest of the playoff run showed what happens when the Bengals let teams hang around. In Super Bowl LVI, Cincinnati had chances to put the Los Angeles Rams away in the second half. The Rams remained close before scoring the game-winning touchdown on their final possession.When Bengals coach Zac Taylor spoke to the team after Saturday’s game in New England, he emphasized focusing on the positives and not apologizing for a victory, a sentiment Burrow echoed in his postgame news conference.But like his star quarterback, Taylor acknowledged the absence of a finishing touch.“We need to be able to knock people out up 22 to nothing,” Taylor said. “We’ve usually done a pretty nice job of that. Today wasn’t that case.”Simulate your own scenarios and check the latest playoff picture. Playoff Machine »• Full schedule » | Standings » | More »
This season, the Bengals are 7-0 when leading after halftime. According to ESPN Stats & Information research, Cincinnati has a plus-52 point differential in the second half, which is fourth in the NFL.The escape in New England marked the second straight week the Bengals have had to overcome a listless half of football. Being able to eliminate any late-game squirminess centers on something the Bengals know they can do very well.“We gotta execute the way we need to, like the way we did in the first half, like we know we’re capable of doing and that we proved that we can,” Burrow said. “The game just got away from us there for a little bit.”From now until the end of the regular season, Cincinnati will have little margin for error. The team’s next two opponents, the Buffalo Bills (12-3) and the Ravens (10-5), have also clinched their respective postseason berths.This time last year, the Bengals were trying to reverse decades of either exiting the playoffs early or not making the postseason at all. Making the Super Bowl with Burrow raised the bar for a franchise with championship aspirations.“We’re winning tough games,” said Bengals center Ted Karras. “I wish we didn’t make it so hard on ourselves all the time, but we did today and we won.”

Jets to start Joe Flacco at QB in season finale

Nick has faith in the ‘Prince that was Promised’, takes Jags to defeat Titans | What’s Wright?