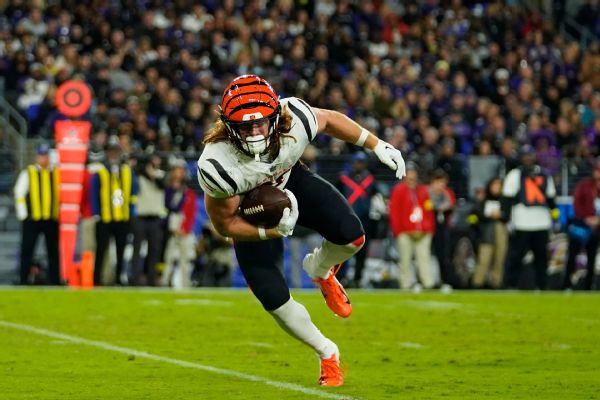 PROVIDENCE, Rhode Island — Cincinnati Bengals tight end Hayden Hurst will not be making his return this weekend.Hurst was downgraded from questionable to out ahead of the team’s game against the New England Patriots on Saturday. He will miss his third straight contest because of a right calf injury.The 29-year-old was limited at practice throughout the week but felt optimistic about his chances of playing against the Patriots (7-7). He told reporters earlier in the week that he was preparing as if he was going to be active for the Bengals’ final road game of the regular season.2 Related”I feel great,” Hurst said on Wednesday following a promising practice. “Really got my confidence back today.”Hurst said he was able to push off well on his right leg and had the burst he wanted following the injury. But after evaluations on Friday, he wasn’t deemed healthy enough to play.Mitchell Wilcox is expected to start in place of Hurst. This season, Wilcox has 11 catches for 104 yards and one touchdown. The score in last week’s win over the Tampa Bay Buccaneers was Wilcox’s first career touchdown. Cincinnati will also be without defensive end Sam Hubbard. He did not practice all week after he suffered a left calf injury in the first half against Tampa Bay.The Bengals (10-4) enter Saturday’s game at Gillette Stadium with a one-game lead over the Baltimore Ravens (9-5) in the AFC North standings. Cincinnati clinched its second consecutive playoff berth when the Jacksonville Jaguars beat the New York Jets 19-3 on Thursday night.