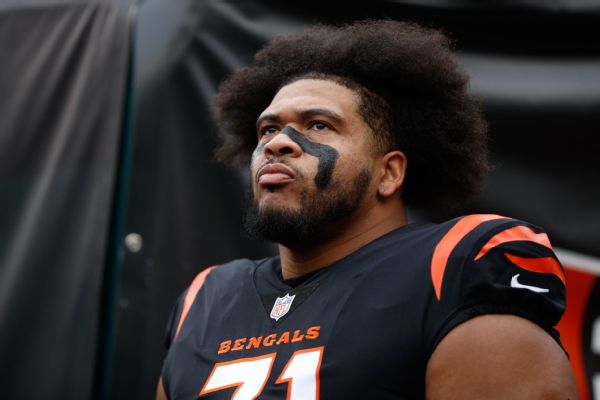 CINCINNATI — The Cincinnati Bengals will be without one of their top offensive linemen for the rest of the season, according to a report.Offensive tackle La’el Collins will miss the rest of the season after he suffered a torn ACL and MCL in his left knee in Saturday’s win over the New England Patriots, per the Cincinnati Enquirer.Collins went down in the first quarter of the team’s 22-18 win at Gillette Stadium after Patriots defensive lineman Davon Godchaux rolled up the back of his leg. After the game, Collins said that preliminary tests indicated that he didn’t suffer any further structural damage. Collins told ESPN that he felt his knee was stable and he had perhaps escaped any serious injury.However, that diagnosis was pending an MRI to get more information Sunday, when the team returned to Cincinnati. A representative for Collins could not be reached for comment Sunday.Collins started 15 games at right tackle, including Saturday’s game against New England. He signed with the team in the 2022 offseason on a three-year deal worth $21 million. Cincinnati’s front office brought in four new starters for its offensive line after quarterback Joe Burrow was sacked 70 times during the regular season and postseason combined.Hakeem Adeniji, who was the team’s starting right guard in Super Bowl LVI, replaced Collins after he went down against the Patriots and is projected to be the team’s right tackle.