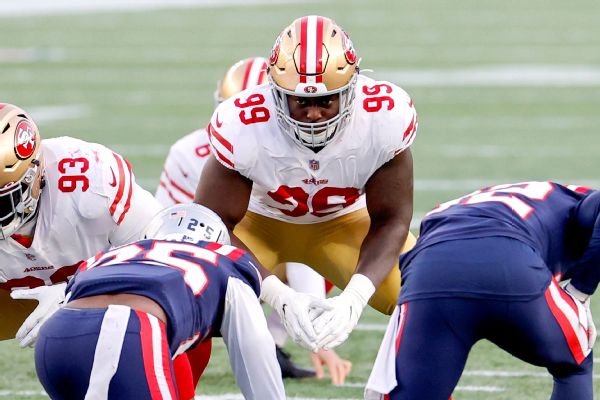 SANTA CLARA, Calif. — The ailing interior of the San Francisco 49ers’ defensive line is finally getting some reinforcements.The Niners officially activated defensive tackle Javon Kinlaw from the injured reserve list Friday, making him eligible to play Saturday against the Washington Commanders. Kinlaw has been out since Week 3 with continued swelling in his surgically repaired right knee.To make room on the roster, the 49ers waived linebacker Curtis Robinson. On Thursday, San Francisco coach Kyle Shanahan suggested Kinlaw would be available to play against the Commanders after looking to be in shape during the practice week.”I expect him to be up,” Shanahan said. “He had a real good Thursday practice that was on a Wednesday and everything was light today, but he had a good week, no setbacks and I’m real excited to see him out there.”With Kinlaw’s activation, the 49ers have now used seven of a possible eight injured reserve activations this season. The eighth and final spot is being saved for the potential return of running back Elijah Mitchell, who is recovering from a sprained MCL in his left knee.Kinlaw’s return is a welcome sight for a Niners defensive line that has been piecing together different combinations on the interior for most of the season. Among defensive tackles alone, Kevin Givens is out with a sprained knee, Hassan Ridgeway is on injured reserve because of a pectoral injury, Kerry Hyder Jr. has been battling an ankle issue and Maurice Hurst has been out all season with a torn biceps.Arik Armstead recently returned from foot and ankle issues and, with Kinlaw back in the mix, the Niners could have their projected starting tackles together for the first time since Week 2.The No. 14 pick in the 2020 NFL draft, Kinlaw has dealt with persistent right knee issues since he entered the league. He had surgery on the knee in late October of 2021. He returned in good shape to start this year’s camp and opened the season as the starter alongside Armstead before the knee flared up again.But Kinlaw says he’s feeling good and excited to be in the mix for San Francisco’s stretch run and into the postseason.”I’m finally going to be part of something special,” Kinlaw said Tuesday. “I’m excited. I couldn’t be happier to do it with this group of guys.”