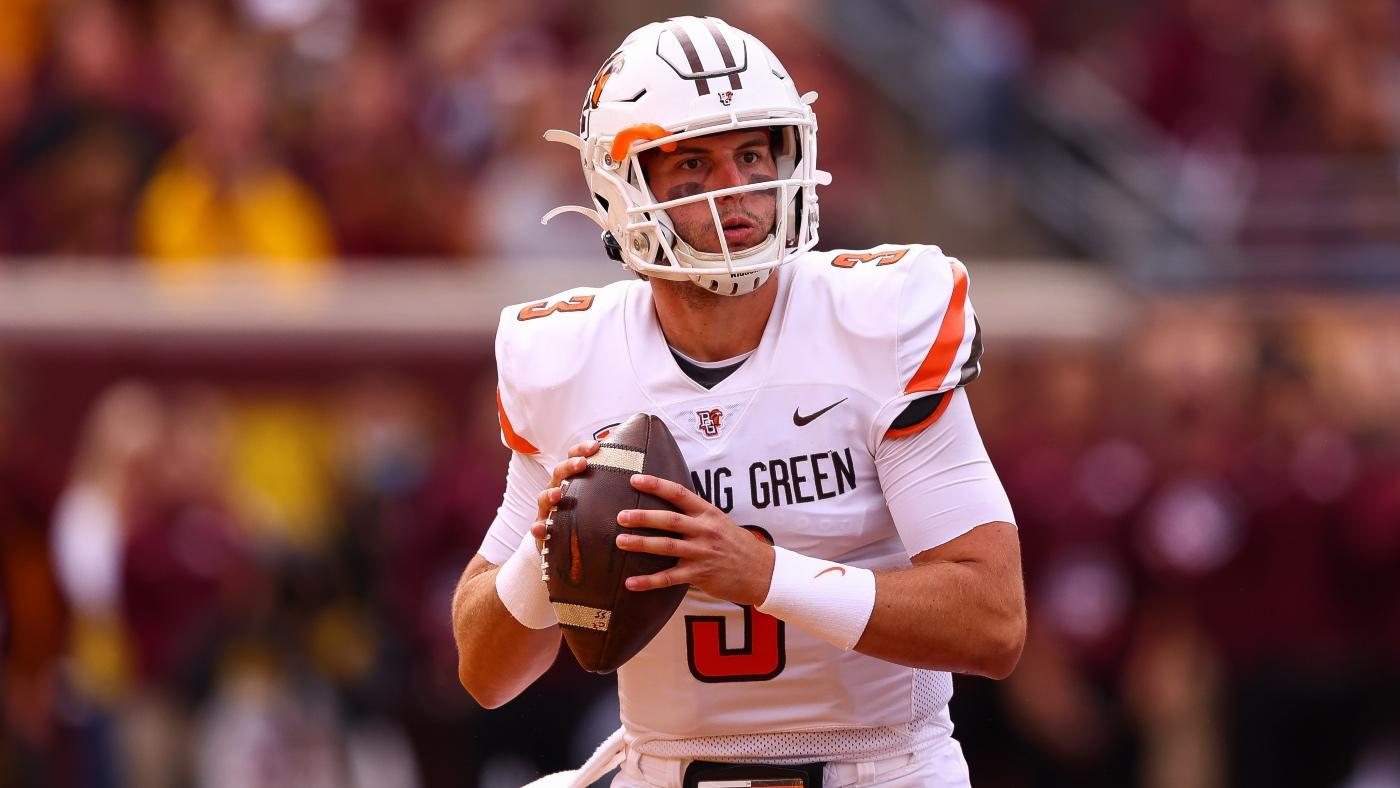 Both teams should be fired up to be in a postseason game Monday when the New Mexico State Aggies face the Bowling Green Falcons in the 2022 Quick Lane Bowl. Not much was expected of either team, but both finished the season 6-6 to earn bowl berths. That means both teams will be highly motivated to win Monday at Detroit’s Ford Field. The Aggies won their final two games, crushing Valparaiso 65-3 in their regular-season finale. This is their fifth bowl game, and just their second since 1960. BGSU defeated Toledo 42-35 on Nov. 15 to become bowl eligible, then lost 38-14 to Ohio in its finale. The Falcons are in their 13th bowl game, but this is their first since 2015.Kickoff is set for Monday at 2:30 p.m. ET. Caesars Sportsbook lists the Falcons as 3.5-point favorites in its latest New Mexico State vs. Bowling Green Quick Lane Bowl odds, and the over/under for total points scored is set at 48.5. Before locking in any Bowling Green vs. New Mexico State or Quick Lane Bowl bets, make sure you check out the college football predictions and betting advice from the SportsLine Projection Model.The SportsLine Projection Model simulates every FBS college football game 10,000 times. Over the past six-plus years, the proprietary computer model has generated a stunning profit of almost $2,500 for $100 players on its top-rated college football picks against the spread. Anyone who has followed it has seen huge returns.Now, the model has locked in on New Mexico State vs. Bowling Green and just revealed its Quick Lane Bowl 2022 predictions. You can head to SportsLine to see the model’s picks. Here are the CFB odds and betting lines for Bowling Green vs. New Mexico State:

Why the Falcons can coverBowling Green has played one of the tougher schedules in the MAC, going 5-3. The Aggies had one of the easiest schedules in the nation, and two of their victories came against FCS teams. The Falcons’ passing attack can be potent when it gets rolling, and quarterback Matt McDonald threw for 2,639 yards and 22 touchdowns this season. Bowling Green is 4-2 when it passes for at least 247 yards and 2-4 when it doesn’t. The Falcons average 237 passing yards per game.  They beat Marshall a week after the Thundering Herd knocked off Notre Dame, and defeated Toledo, the eventual MAC champion. McDonald threw for 395 yards in the victory against the Rockets to clinch bowl eligibility. Odieu Hiliare had 246 receiving yards in that game and has 704 and six TDs this season. Fellow wideout Tyrone Broden also has scored six times, and tight end Christian Sims has 41 receptions. The Falcons are 3-3 against the spread in their past six. Why the Aggies can coverNew Mexico State doesn’t have a ton of bowl experience, but it has never lost a postseason game, going 3-0-1. The Aggies are built around defense, and they shouldn’t have too much trouble against Bowling Green. The Falcons average 338 yards per game (106th in FBS), while the Aggies allow 343 (33rd). NMSU ranks 14th in the nation against the pass (185 YPG). While the Aggies are average against the run, BGSU averages just 101 yards on the ground (121st).

The Aggies also have a powerful running game that averages 156 yards, led by Star Thomas with 477 yards. Quarterback Diego Pavia is expected to play Monday, and he has rushed for 443. The junior threw for 323 yards and a career-high four touchdown passes in the finale against Valparaiso. The Aggies rushed for 232 yards in the game and averaged 11.9 yards per play. New Mexico State is 7-5 ATS this season after going 5-1 ATS in its past six games.How to make New Mexico St. vs. Bowling Green picksThe model has simulated the Quick Lane Bowl matchup 10,000 times, and the results are in. The model is leaning Over on the point total, with simulations projecting 50 combined points. The model also has generated a point-spread pick that is hitting in 60% of simulations. You can only get the model’s Quick Lane Bowl picks at SportsLine. So who wins the Bowling Green vs. New Mexico State matchup in Monday’s Quick Lane Bowl? And which side of the spread is hitting 60% of the time? Visit SportsLine right now to see which side of the New Mexico State vs. Bowling Green spread to back Monday in the Quick Lane Bowl, all from the advanced model that has been crushing its top-rated college football picks, and find out.