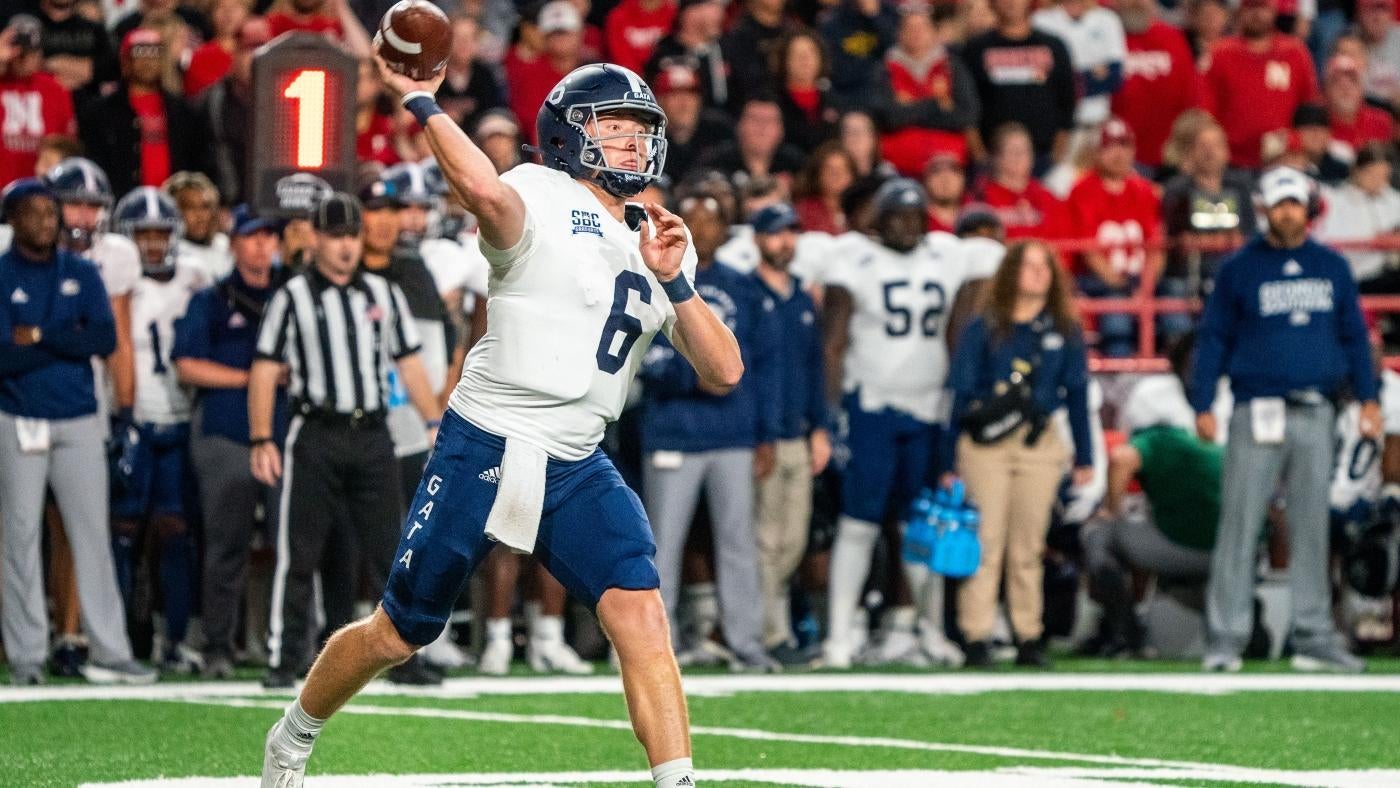 It will be a reunion on Tuesday when quarterback Kyle Vantrease leads the Georgia Southern Eagles against the Buffalo Bulls in the 2022 Camellia Bowl in Montgomery, Ala. Vantrease spent five years with Buffalo but opted to spend his final year of eligibility at Georgia Southern. Both teams lost three straight games before winning their regular-season finales to earn bowl eligibility. Buffalo (6-6, 5-3 MAC) rallied to defeat Kent State 23-22 on Dec. 2 while the Eagles (6-6, 3-5 Sun Belt) defeated Appalachian State 52-48 in two overtimes on Nov. 26. This is Georgia Southern’s fifth bowl appearance in eight years of eligibility, and it is the sixth bowl game in Buffalo’s history. This is the first all-time meeting between the teams. Kickoff is set for at noon ET at the Cramton Bowl. The Eagles are 4.5-point favorites in Caesars Sportsbook’s latest Georgia Southern vs. Buffalo odds, and the over/under for total points scored in the Camellia Bowl is set at 67. Before locking in any Buffalo vs. Georgia Southern picks, make sure you check out the college football predictions and betting advice from the SportsLine Projection Model.The SportsLine Projection Model simulates every FBS college football game 10,000 times. Over the past six-plus years, the proprietary computer model has generated a stunning profit of almost $2,500 for $100 players on its top-rated college football picks against the spread. Anyone who has followed it has seen huge returns.Now, the model has locked in on Buffalo vs. Georgia Southern and just revealed its Camellia Bowl 2022 predictions. You can head to SportsLine to see the model’s picks. Here are the college football odds and betting lines for Georgia Southern vs. Buffalo:

Why Georgia Southern can coverGeorgia Southern is 7-5 against the spread this season, and Vantrease has the passing offense humming. The Eagles average 469 yards per game (19th) in FBS, 327 through the air (fourth). The former Buffalo quarterback has 3,901 passing yards and 25 touchdowns. Georgia Southern scores almost 34 points per game, while Buffalo is scoring 29 per contest. Wide receiver Khaleb Hood has team-highs with 80 receptions and 896 yards and has scored three times.Georgia Southern is 4-1 ATS in its past five non-conference games. The Eagles, long known for their power running game, can still run the ball. Two running backs have more than 450 rushing yards, with Jalen White going for 914 and 10 touchdowns and Gerald Green chipping in 475 yards and six TDs. The Eagles defense has 18 sacks and 15 takeaways and is led by linebacker Marques Watson-Trent, who has 104 tackles. The unit allows 498 yards per game, so the offense will need to lead the way Tuesday, but Buffalo averages 376 yards (77th in FBS).     Why Buffalo can coverThe Bulls are 4-1 ATS following a victory and 3-1-1 ATS as an underdog. They have a balanced offense that averages 233 yards passing (62nd in FBS) and 143 rushing (75th). Quarterback Cole Snyder has taken over for Vantrease and has 2,765 passing yards and 17 touchdowns. He also has four rushing touchdowns, and running back Mike Washington has rushed for 606 yards and seven scores. Georgia Southern ranks 129th in the nation in both total yards (498) and rushing yards (240) allowed per game, and the Eagles also allow 5.1 yards per rush (117th).

Four Bulls receivers have at least 200 receiving yards, led by Justin Marshall with 53 catches for 710 yards and eight TDs. Quian Williams leads the team in receptions with 56 for 643 yards and five scores. The Buffalo defense gives up 391 yards and 27 points per game and is an opportunistic group. The Bulls have 26 takeaways, eighth-most in the nation, and 24 sacks. Vantrease has thrown 15 interceptions, so there should be opportunities. Cornerback Marcus Fuqua leads the nation with seven interceptions and was named a third-team All-American.    How to make Buffalo vs. Georgia Southern picksThe model is leaning Under on the total, projecting 65 combined points. It also says one side of the spread hits almost 60% of the time. You can see who to back at SportsLine.So who wins Georgia Southern vs. Buffalo? And which side of the spread hits almost 60% of the time? Visit SportsLine right now to see which side of the spread to back, all from the advanced model that has been crushing its top-rated college football picks, and find out.